By Carl O'Donnell and Rebecca Spalding (Reuters) - The Trump administration said on Tuesday it is releasing millions of COVID-19 vaccine doses it had been holding back for second shots and urged states to offer them to all Americans over age 65 or with chronic health conditions. 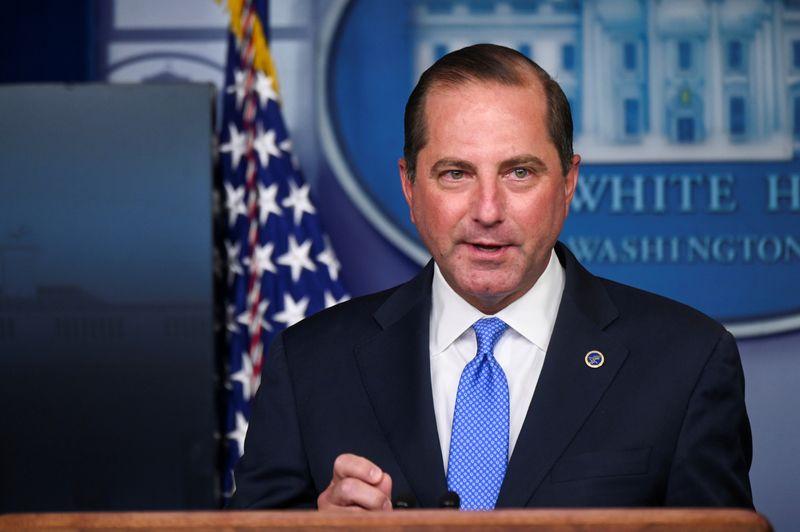 By Carl O'Donnell and Rebecca Spalding

(Reuters) - The Trump administration said on Tuesday it is releasing millions of COVID-19 vaccine doses it had been holding back for second shots and urged states to offer them to all Americans over age 65 or with chronic health conditions.

U.S. Department of Health and Human Services Secretary Alex Azar said during a news briefing that the U.S. pace of inoculations has risen to 700,000 shots per day and is expected to rise to 1 million per day within a week to 10 days.

Releasing doses that have been held back should bring the total number of doses that have been made available for use in the United States to roughly 38 million, Azar said. States have already received about 25.5 million doses, according to data from the Centers for Disease Control and Prevention (CDC).

Most states prioritized healthcare workers and nursing home staff and residents for their first deliveries of COVID-19 vaccines, which began last month, following CDC recommendations. The process of inoculating those groups has been slow due partly to the complexity of giving them the vaccines and a lack of federal planning beyond distribution to states.

CDC head Dr. Robert Redfield said on Tuesday that he "strongly recommends" vaccines be made available to people over age 65 and those younger than 65 who have other chronic health conditions.

The agency last week made clear that states can move on to the next priority group - people older than 75 and essential workers - without completing inoculations for the first groups, but fewer than 20 states have so far done so. A handful of states including Texas, Florida and Georgia have started giving shots to people 65 and over.

Subsequent distributions of doses by the federal government will give preference "based on the pace of administration as reported by states and by the size of the 65 and over population in each state," Azar said during the briefing.

Redfield suggested that some state vaccination figures may appear lower than they actually are because of reporting lags, and that the CDC is now requiring states to report shots they give within three days of their administration.