By Simon Lewis and Tuvan Gumrukcu WASHINGTON/ANKARA (Reuters) - Secretary of State Antony Blinken on Monday reassured Ankara that Washington blames the Kurdistan Workers Party (PKK) for the executions of 13 kidnapped Turks in northern Iraq, after Turkey called an earlier U.S. 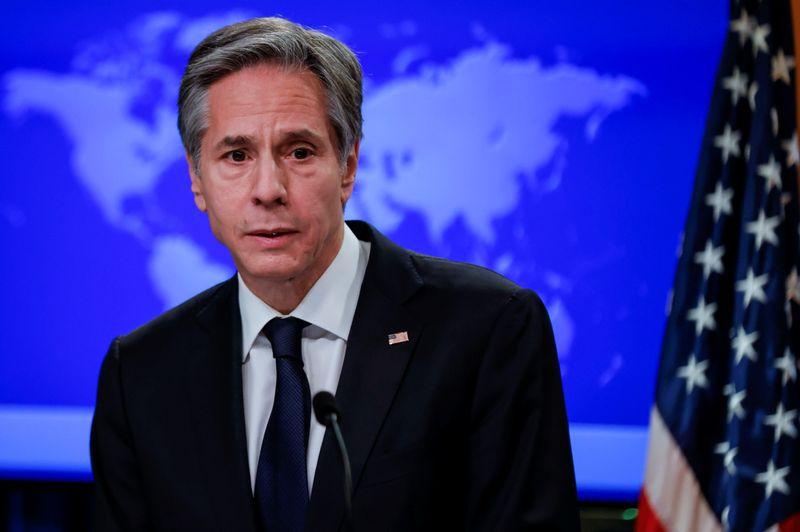 By Simon Lewis and Tuvan Gumrukcu

WASHINGTON/ANKARA (Reuters) - Secretary of State Antony Blinken on Monday reassured Ankara that Washington blames the Kurdistan Workers Party (PKK) for the executions of 13 kidnapped Turks in northern Iraq, after Turkey called an earlier U.S. statement on the killings "a joke."

Turkey said on Sunday militants from the outlawed PKK executed the captives, including Turkish military and police personnel, amid a military operation against the group.

The United States had said on Sunday evening that it stood by fellow NATO member Turkey and that it condemned the killings if it was confirmed that responsibility lay with the PKK.

Turkey, already angered by Washington's partnership with Kurdish fighters in neighbouring Syria, was infuriated by the conditionality of the statement and summoned the U.S. ambassador to Ankara on Monday.

Price did not say if the call was made in response to Turkey summoning the U.S. ambassador. A call between the countries' two top diplomats had been anticipated for weeks.

The call was the first between Blinken and his Turkish counterpart, nearly four weeks after President Joe Biden took office. Biden has not yet spoken to Erdogan, a delay that has been interpreted by some as a snub of an important ally.

Turkish President Tayyip Erdogan earlier on Monday criticized Washington, which has designated the PKK a terrorist organisation but deployed U.S. forces alongside Kurdish YPG fighters in Syria. Ankara considers the YPG to be inextricably linked to the PKK.

"It's a joke. Were you not supposed to stand against the PKK, the YPG? You clearly support them and stand behind them," Erdogan said in the Black Sea city of Rize.

Cavusoglu also complained on Monday about silence from "countries that are supposedly claiming to battle terrorism," adding they were trying to "gloss over" the issue "with ifs and buts".

Since Biden was elected last year, Turkey has repeatedly said it wants to improve strained ties with the United States, but Washington's support for the YPG remains a big point of disagreement.

Erdogan said that Ankara would continue its cross-border operations into Iraq against the PKK, which has waged a decades-old insurgency in mainly Kurdish southeast Turkey in which more than 40,000 people have been killed.

"If we are together with you in NATO, if we are to continue our unity, then you will act sincerely towards us. Then, you will stand with us, not with the terrorists," Erdogan said.

He said nobody could criticise Turkey's cross-border operations in Syria or Iraq after the killings, and countries must choose between Turkey and the militants.