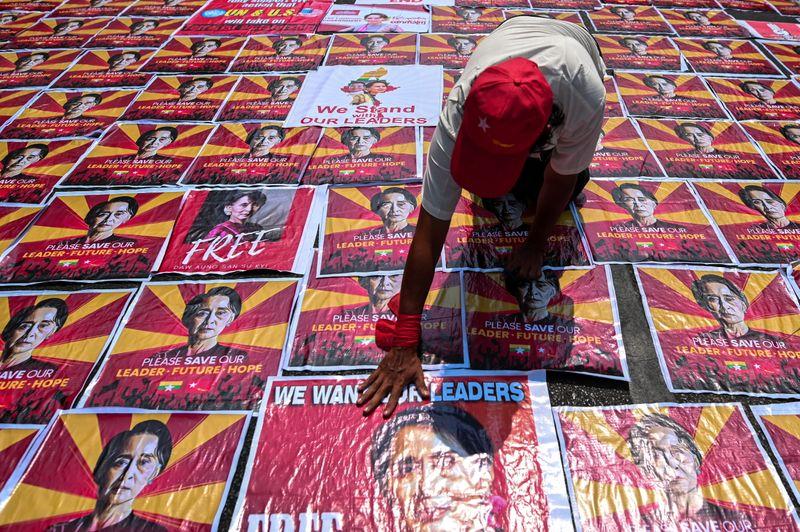 The Treasury Department's Office of Foreign Assets Control said the move took aim at General Maung Maung Kyaw, who is the air force commander in chief, and Lieutenant General Moe Myint Tun, a former army chief of staff and commander of one of the military's special operations bureaus which oversee operations from the capital, Naypyidaw.

"The military must reverse its actions and urgently restore the democratically elected government in Burma, or the Treasury Department will not hesitate to take further action," the department said in a statement.

U.S. Secretary of State Antony Blinken echoed the threat. "We will not hesitate to take further action against those who perpetrate violence and suppress the will of the people," Blinken said in a statement.

A general strike against military rule shut businesses in Myanmar on Monday and huge crowds gathered peacefully despite fears of violence after authorities warned that confrontation could be deadly.

Three weeks after seizing power, the junta has failed to stop the daily protests and a civil disobedience movement calling for the reversal of the coup and release of elected leader Aung San Suu Kyi.

"We call on the military and police to cease all attacks on peaceful protesters, immediately release all those unjustly detained, stop attacks on and intimidation of journalists and activists, and restore the democratically elected government," Blinken said.

Like several military officers named in the first round of U.S. sanctions on Myanmar since the coup, both generals blacklisted on Monday have been appointed as members of the junta's State Administration Council.

Their designation freezes any U.S. assets they may have and generally bars Americans from dealing with them.