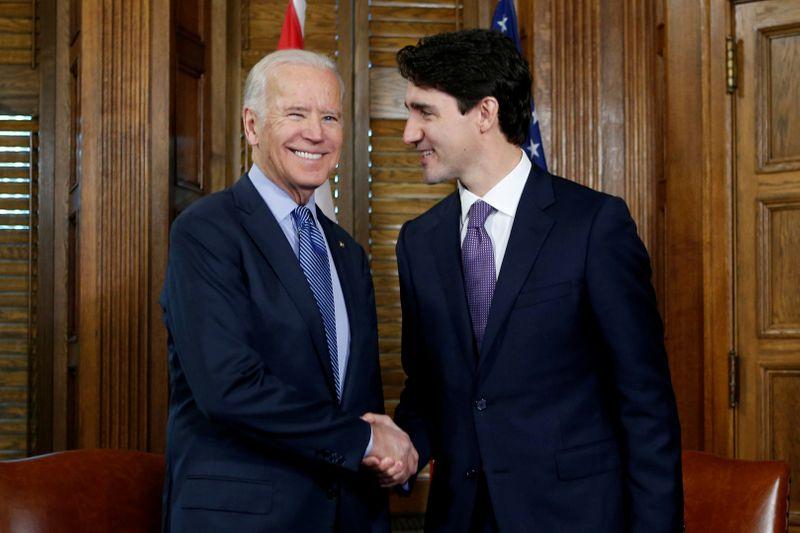 The meeting, which will be virtual due to the coronavirus crisis, will aim to elevate collaboration on shared concerns at a time when the relationship between the close allies has been strained by Biden's decision to block the Canada-backed Keystone XL pipeline.

In a statement on Saturday, the White House said Biden and his Cabinet will also meet virtually with Canadian ministers on a range of bilateral and global issues.

White House spokeswoman Jen Psaki said it would be "an opportunity for the two leaders to review joint efforts in areas of mutual interest such as the COVID-19 response, climate change, and the economic ties that bind our countries, as well as the deep people-to-people bonds we share.

"The President will highlight the strong and deep partnership between the United States and Canada as neighbors, friends and NATO Allies," she said.

Trudeau called the U.S.-Canada relationship "one of the strongest and deepest friendships between any two countries."

"It is built on common values, strong ties between our people, and a shared geography ... We will work together to end the COVID-19 pandemic and support people in both our countries," he said in a statement.

Trudeau was the first world leader to congratulate Biden when he was declared the winner of the November U.S. election and his swift embrace illustrates the degree to which Canada, one of America's closest allies, is looking forward to turning the page on the Donald Trump era.

Biden later tweeted that he looked forward "to renewing the strong friendship between the United States and Canada and working to tackle the shared challenges we face."

While Biden has had at-times lengthy calls with several foreign leaders, next week's meeting goes further by extending to lower-level meetings between Cabinet ministers, as have interactions with Mexico and several European allies.

Biden revoked a permit for the Keystone pipeline, which would transport 830,000 barrels a day of carbon-intensive heavy crude from Canada's Alberta to Nebraska, on his first day in office last month, as part of a flurry of executive orders aimed at curbing climate change.

The two countries are in a shared standoff with China after Canada's detention of Meng Wanzhou, chief financial officer of China's Huawei Technologies on a U.S. arrest warrant. Beijing detained and charged two Canadians with espionage after the detention of Meng, who remains under house arrest. {nL1N2K42M6]