By Stephen Kalin and Asma Alsharif RIYADH/DUBAI (Reuters) - U.S. Secretary of State Mike Pompeo discussed Iran and maritime security with rich Gulf Arab allies during a trip to the region on Monday after President Donald Trump called off a military strike to retaliate for Tehran's downing of a U.S. drone. 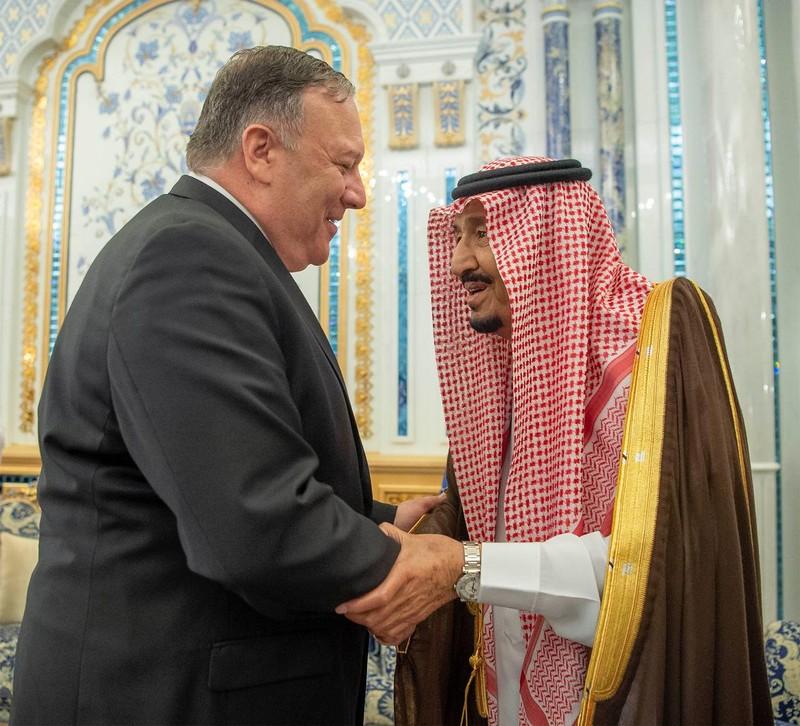 By Stephen Kalin and Asma Alsharif

RIYADH/DUBAI (Reuters) - U.S. Secretary of State Mike Pompeo discussed Iran and maritime security with rich Gulf Arab allies during a trip to the region on Monday after President Donald Trump called off a military strike to retaliate for Tehran's downing of a U.S. drone.

A senior U.S. State Department official said the United States is building a coalition with its allies to protect Gulf shipping lanes by having "eyes on all shipping" following recent attacks on oil tankers that Washington blamed on Iran.

Pompeo arrived in the United Arab Emirates after meeting with King Salman and Crown Prince Mohammed bin Salman in Saudi Arabia where talks covered protection for ships in the Gulf.

"Freedom of navigation is paramount," Pompeo tweeted from the Saudi city of Jeddah.

The senior U.S. official told reporters en route to Abu Dhabi that the U.S. Navy was building a "Sentinel" programme for "proactive deterrence". He said a coalition of nations would provide both material and financial contributions, but did not name the countries.

"What the Iranians are doing by shooting down American drones, shooting at other drones in the region not even necessarily over the Gulf, anywhere, is to prevent us from having eyes on them," the official said.

A second U.S. official, also speaking on condition of anonymity, told Reuters that the plan aimed to see U.S. partners providing the majority of ships that would be positioned in intervals in the Gulf of Oman or the Strait of Hormuz, keeping watch.

"It's not in operation (yet) but it's something we're looking at with our partners," the official said, describing the concept.

In his meeting with Abu Dhabi Crown Prince Mohammed bin Zayed al-Nahyan, Pompeo pressed him on increased maritime security in the Strait of Hormuz.

"We'll need you all to participate, your military folks," Pompeo said. "The President is keen on sharing that the United States doesn’t bear the cost of this," he added, noting that the UAE, Saudi Arabia and "another 20 countries" would "need to help advance" the exercise.

Tehran has denied any involvement in the explosive blasts that have hit six vessels, including two Saudi oil tankers, near the Strait of Hormuz, through which almost a fifth of the world's oil passes.

The U.S. official said the deterrents include cameras, binoculars and ships, including from the United States.

In an apparent sign of how quickly the United States has mobilised diplomatic efforts as the confrontation escalates, Pompeo thanked King Salman for meeting on "such short notice".

Pompeo and Prince Mohammed reiterated that the "two countries stand side by side in confronting the hostile Iranian activities and in combating terrorism", the Saudi media ministry said.

The United States has protected the strait for decades with its naval Fifth Fleet based in Bahrain. U.S. President Donald Trump said on Monday that other countries, including China and Japan, should protect their own ships there.

"There will be military ships from foreign countries, from a broad coalition of countries who participate in this. I don't think they’re escorting. I think they’re observing,” the U.S. official said.

It was not clear what role Saudi Arabia and the UAE would play in the coalition.

Relations between longtime foes Iran and the United States have deteriorated since Trump withdrew Washington a year ago from a 2015 accord that curbed Tehran's nuclear programme in exchange for easing sanctions.

Pompeo did not discuss last year's murder of U.S.-based Saudi journalist Jamal Khashoggi with Saudi Arabia's king on Monday and it was unclear whether the issue was raised in a separate meeting with the crown prince.

"It did not" come up, the official said of Pompeo's meeting with the king. He could not confirm if the case was raised with the crown prince, whom Pompeo met later.

A U.N. report last week called for the crown prince and other senior officials to be investigated, given credible evidence against them.

The Trump administration is pressing the Saudis to show progress toward holding to account those behind the killing of Khashoggi in the kingdom's Istanbul consulate.

The murder tarnished the crown prince's international standing. The CIA and some Western countries believe he ordered the killing, which Saudi officials deny.