By Hyonhee Shin and Alexandra Alper SEOUL/WASHINGTON (Reuters) - The United States is in behind-the-scenes talks with North Korea over a possible third summit and has proposed reviving working-level negotiations stalled since a second meeting between U.S. 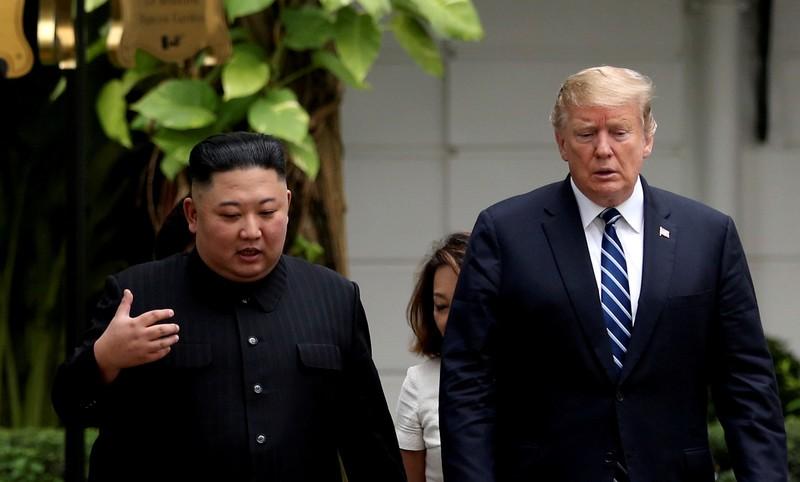 By Hyonhee Shin and Alexandra Alper

Trump said on Wednesday he would not meet with the North Korean leader during his trip to Asia for the G20 summit, which will include a visit to South Korea at the weekend.

"But I may be speaking with him in a different form," he told reporters before heading to Asia. He did not elaborate, but a White House official said he may have been talking about exchanging more letters with Kim.

U.S. Secretary of State Mike Pompeo said on Sunday that a recent exchange of letters between Trump and Kim boosted hopes for a restart of talks, calling it a "very real possibility."

North Korea's official KCNA news agency said on Sunday that Trump's letter had "excellent content" and Kim would "seriously contemplate" it, without elaborating.

Trump told reporters on June 11 he had received a very warm "beautiful letter" from Kim. He has not divulged its contents, but the White House official, who did not want to be identified, described the letter as "very flowery".

Earlier on Wednesday, Moon, in written answers to questions from news agencies, including Reuters, said there was no reason to talk of a "stalemate" with North Korea just because the pace of progress had been slow.

A second summit between Trump and Kim held in February in Hanoi collapsed over differences between U.S. calls for North Korea to give up its nuclear weapons and Kim's demands for relief from punishing sanctions.

"Both sides have been engaged in dialogue in regard to a third summit," Moon said. "It's noteworthy that the behind-the-scenes talks have been preceded by the mutual understanding of each other's position gained through the Hanoi summit."

Moon said the United States had made a proposal for working-level talks and he urged Pyongyang to return to negotiations "at the earliest date possible in order to convince the international community of its willingness for complete nuclear dismantlement".

North Korea has pursued nuclear and missile programmes for years in defiance of U.N. Security Council resolutions and sanctions.

Moon has been an ardent champion of efforts to end the confrontation, vowing to play a mediator role in nudging North Korea into giving up its nuclear weapons in exchange for an end to sanctions and security guarantees.

Trump said on Tuesday he would hold another meeting with Kim at "at some point."

The Hanoi breakdown was a blow for Moon, who days before the summit offered to "ease the burden" of the United States by providing concessions to North Korea through inter-Korean economic initiatives which he seeks to revive.

Despite Kim's positive comments about Trump's letter, on Wednesday North Korea's foreign ministry called a recent U.S. extension of sanctions "a manifestation of the most extreme hostile acts by the United States" and an outright challenge to the joint statement issued at the first Trump-Kim summit in Singapore in June last year, in which the two sides agreed to foster a new era of relations.

Stephen Biegun, the U.S. special envoy for North Korea who led working-level talks ahead of the Hanoi summit, is visiting Seoul from Thursday for meetings with South Korean officials ahead of Trump, who is due in South Korea at the weekend.

U.S. officials have declined to comment on whether Trump will go to the DMZ. He had wanted to travel there on a 2017 visit to South Korea, but heavy fog prevented it.

Moon said the resumption of negotiations between North Korea and the United States would take things "to the next level," and added: "I believe everything has now fallen into place for that to happen."

The Hanoi summit cast doubt on Kim's willingness to denuclearise and Pyongyang increased worries about the future of dialogue when it tested short-range missiles last month and appeared to ignore repeated offers of dialogue from Washington and Seoul.

Moon said Kim had told him he wanted to "finalise a denuclearisation process as soon as possible and to concentrate on economic development".

However, Biegun has admitted that the two sides have yet to agree on what is meant by denuclearisation, which North Korea has taken to include the U.S. nuclear umbrella protecting Japan and South Korea.

(Reporting by Hyonhee Shin in Seoul and Alexandra Alper, Steve Holland and David Brunnstrom in Washington; editing by James Dalgleish and Alistair Bell)