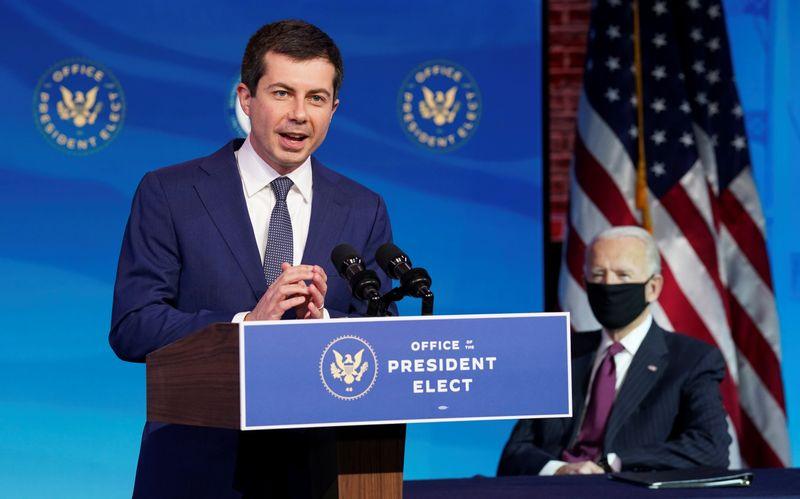 "We also have a lot of work to do to improve the infrastructure in this country, a mission that will not only keep more people safe, but also grow our economy as we look to the future," former South Bend, Indiana, Mayor Pete Buttigieg will say, according to a copy of his prepared remarks.

Biden put Buttigieg - a rival for the Democratic presidential nomination last year - in charge of the department that oversees aviation, highways, vehicles, pipelines and transit.

In April 2019, then President Donald Trump and Democratic leaders agreed to spend $2 trillion over a decade - but the president never proposed any new revenue source to pay for the upgrades - and never made it a priority.

"Infrastructure Week" became a long-running joke in the Trump administration as other unrelated events often overtook the effort to rebuild roads, bridges and airports.

"Now is the time, and we have a real chance to deliver for the American people," Buttigieg will say in his testimony.

Biden said last week he will ask Congress in February for "historic investments in infrastructure and manufacturing, innovation, research and development, and clean energy."

Biden has also vowed to boost fuel economy standards that were slashed under Trump and take steps to increase the number of electric vehicles on American roads.

Since 2008, Congress has transferred about $141 billion to the Highway Trust Fund, according to the Government Accountability Office.

Congress has not boosted the 18.4-cents-per-gallon federal gasoline tax since 1993. That tax is now worth just 10.2 cents after adjusting for inflation.