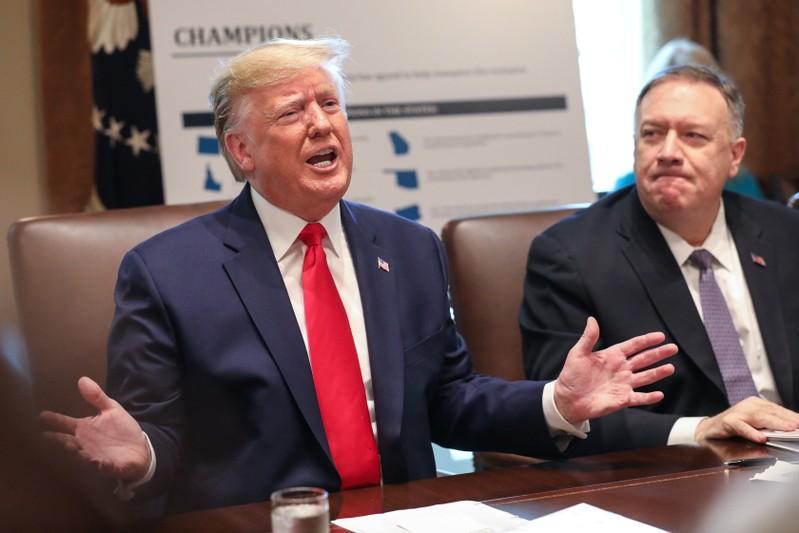 "All Republicans must remember what they are witnessing here - a lynching. But we will WIN!" Trump wrote on Twitter, referring to the impeachment inquiry https://www.reuters.com/article/us-usa-trump-whistleblower/envoy-testifies-trump-tied-ukraine-aid-to-politically-motivated-investigations-idUSKBN1X10BC in the Democratic-led House of Representatives focusing on his request that Ukraine investigate a domestic political rival, Democrat Joe Biden.

Lynching refers to the murder of thousands of Americans, most of them black, between the 1880s and 1960s, as African-Americans struggled for their rights as U.S. citizens in the aftermath of the Civil War in which Southern states fought in vain to maintain black slavery.

"The president should not compare a constitutionally mandated impeachment inquiry to such a dangerous and dark chapter of American history. It's irresponsible for him to do so, and I hope that he will apologize," said House Democratic Caucus Chairman Hakeem Jeffries, who is black.

Senate Majority Leader Mitch McConnell, a Republican, said, "Given the history in our country, I would not compare this to a lynching. That was an unfortunate choice of words." McConnell added that he viewed the House inquiry as "an unfair process" that is denying Trump "procedural safeguards."

Democrats and other critics have previously accused Trump of stoking racial divisions while trying to appeal to his largely white core of conservative Republican voters, noting his comment in 2017 that there were "very fine people on both sides" at a rally by white nationalists in Charlottesville, Virginia in which a counter-protester was killed.

Some Republican allies agreed with Trump's use of the word lynching.

"It shows a lot of things about our national media. When it's about Trump, who cares about the process, as long as you get him. So, yeah, this is a lynching in every sense. This is un-American," Republican Senator Lindsey Graham, whose home state of South Carolina has a large black population, told reporters.

Trump has a long and controversial history on race including decades-old allegations of discrimination in his family's real estate business. He also championed the death penalty for five black and Latino teens wrongly accused of raping a white woman in 1989 in New York's Central Park, used an expletive to describe African countries in 2018, and singled out black athletes for criticism after they failed to stand for the national anthem while protesting racial inequity.

Trump's lynching comment was immediately condemned by critics as unbecoming of a president.

"For him to say something like that was disgusting, reflects his insensitivity toward the historical tragedies of this country," said Representative Barbara Lee, who said she was not surprised or shocked but Trump's comments but "just very, very disappointed."

"For Trump to characterize a legal impeachment inquiry as a lynching shows a complete disrespect for the thousands of Black people lynched - murdered - throughout our nation's history in acts of racism and hatred," said Karen Baynes-Dunning, interim president of the Southern Poverty Law Center, which advocates for equal opportunity and fights bigotry.

The impeachment inquiry is focused on Trump's request during a July 25 phone call with Ukrainian President Volodymyr Zelenskiy that he investigate a domestic political rival, former vice president Joe Biden. Biden is a leading contender to become the Democratic 2020 presidential nominee to run against Trump.

Senator Tim Scott, the only black Republican U.S. senator and one of just two black Republicans in Congress, said, "I get his absolute rejection of the process," but said he would not use the word lynching. Scott, like Graham, represents South Carolina.

Republican Jeb Bush, a former Florida governor who ran in the party's 2016 presidential nomination contest won by Trump, wrote on Twitter: "The President is not a victim. He should be the most powerful person on the planet. To equate his plight to lynching is grotesque."

Senator Elizabeth Warren, a leading Democratic presidential candidate, wrote on Twitter, "Lynching is a horrific stain on our country's history, and it is beyond disgraceful for Donald Trump to invoke one to avoid being held accountable for his crimes."

"The president was clearly articulating the way he feels and the way you guys have treated him from day one," Gidley told reporters.

(Reporting by Patricia Zengerle and Richard Cowan; Additional reporting by Alexandra Alper and Susan Heavey; editing by Will Dunham and Grant McCool)