By Bryan Woolston and Jonathan Allen TERRE HAUTE, Indiana (Reuters) - A U.S. federal judge issued an injunction on Monday delaying what would have been the first federal execution in 17 years, scheduled for later in the day, thwarting at least for now the Trump administration's goal of reviving capital punishment at the federal level. Judge Tanya Chutkan of the U.S 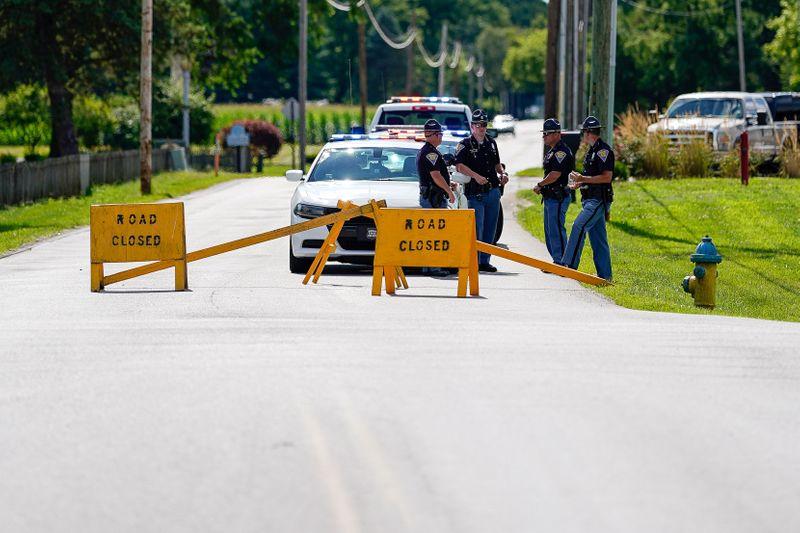 By Bryan Woolston and Jonathan Allen

TERRE HAUTE, Indiana (Reuters) - A U.S. federal judge issued an injunction on Monday delaying what would have been the first federal execution in 17 years, scheduled for later in the day, thwarting at least for now the Trump administration's goal of reviving capital punishment at the federal level.

Judge Tanya Chutkan of the U.S. district court in Washington ordered the U.S. Department of Justice to delay four executions scheduled for July and August to allow continuation of the condemned men's legal challenges against a new lethal injection protocol announced in 2019.

"The scientific evidence before the court overwhelmingly indicates that the 2019 Protocol is very likely to cause Plaintiffs extreme pain and needless suffering during their executions," Chutkan wrote in her order.

She said the inmates were likely to succeed in their claim that the new one-drug protocol using pentobarbital, a powerful barbiturate, breached a constitutional ban on "cruel and unusual" punishments.

Chutkan sided with a medical expert cited by the inmates who said that a high-dose injection of pentobarbital was caustic enough to rapidly fill a condemned man's lungs with bloody fluid, causing him to feel as if he were drowning for some time before losing consciousness.

To make their deaths less painful, the inmates have proposed that the Justice Department add morphine or a similar painkiller to the lethal injection protocol, or arrange for them to be executed by firing squad, a method last used a decade ago by Utah's government.

The Trump administration asked the U.S. Supreme Court to overturn Chutkan's order, writing in its application that it was a "meritless injunction" that would "scramble" its plans to "administer a dignified and humane lethal injection."

The Justice Department also challenged the injunction in the U.S. Court of Appeals for the D.C. Circuit, saying in a court filing its extensive planning for the July and August dates, including training drills for the 40-member execution team and the booking of transportation and hotel rooms, "cannot easily be undone."

A previous injunction issued by Chutkan on different grounds last year, postponing the original execution dates set in December, was overturned on appeal.

Chutkan's new order came down less than seven hours before Daniel Lewis Lee was due to be put to death at 4 p.m. using a lethal injection at the Justice Department's execution chamber in Terre Haute, Indiana.

Lee was sentenced to death for his role in the 1996 murders of three members of an Arkansas family, including an 8-year-old child. Relatives of his victims have opposed his execution.

"The government has been trying to plow forward with these executions despite many unanswered questions about the legality of its new execution protocol," Shawn Nolan, one of the public defenders representing the inmates, said in a statement.

Efforts to resume capital punishment at the federal level were underway within a few months of President Donald Trump's inauguration in 2017, ending a de facto moratorium that began under his predecessor, Barack Obama, due to problems getting execution drugs and while long-running legal challenges to lethal injections played out in federal courts.

A European Union ban on selling drugs for use in executions or torture has led to pharmaceutical companies refusing to sell such drugs to U.S. prison systems.

The Justice Department spent much of 2018 and 2019 building a secret supply chain of private companies to make and test its drug of choice, pentobarbital, which replaces a three-drug protocol used in previous executions. Some of the companies involved said they were not aware they were testing execution drugs, a Reuters investigation found last week.

One laboratory has since announced it will refuse to test pentobarbital intended for executions.

The Justice Department had scheduled two more executions for later in the week and a fourth in August, of Wesley Purkey, Dustin Honken and Keith Nelson, all convicted of murdering children.

The coronavirus pandemic has prompted separate lawsuits from relatives of Lee's victims and Purkey's spiritual adviser to delay the executions until the pandemic has passed so they can safely attend. At least one employee involved in the executions has tested positive for COVID-19, the Justice Department said.