By Richard Cowan WASHINGTON (Reuters) - Nancy Pelosi, a mainstay of American politics for nearly two decades, on Wednesday was nominated by her fellow Democrats to again be the speaker of the U.S. House of Representatives as she manoeuvred to squelch a small group demanding younger leadership. As Democrats prepare to retake control of the House, Pelosi, 78, won the secret ballot contest in which she had no opponent 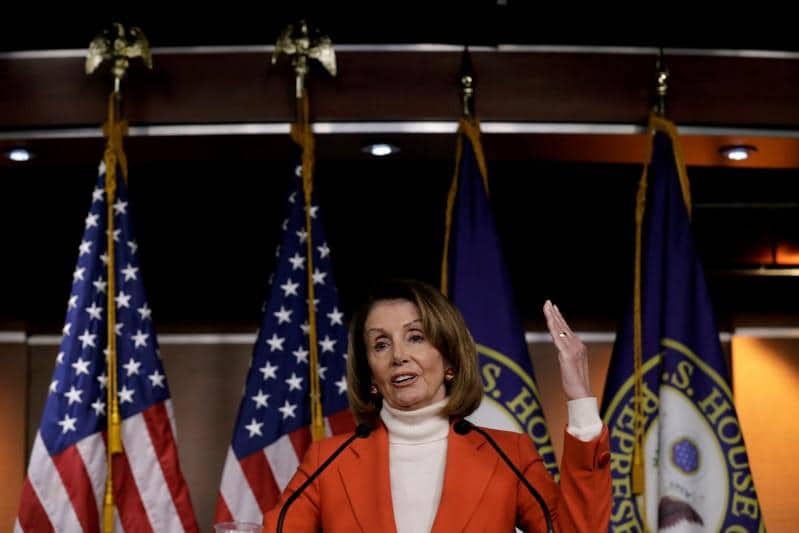 WASHINGTON (Reuters) - Nancy Pelosi, a mainstay of American politics for nearly two decades, on Wednesday was nominated by her fellow Democrats to again be the speaker of the U.S. House of Representatives as she manoeuvred to squelch a small group demanding younger leadership.

As Democrats prepare to retake control of the House, Pelosi, 78, won the secret ballot contest in which she had no opponent.

Over the next few weeks she will try to win over enough naysayers within her own party to nail down a victory in early January when the full House convenes to elect a new speaker. On Wednesday she made progress when some of the potential renegades announced their support for her.

If Pelosi does come up short, Democrats likely will scurry before the January House vote to find an acceptable replacement and avoid a messy floor fight at the start of the year.

Republicans, who next year will be in the minority for the first time since 2010, are expected to vote against any Democratic nominee for speaker.

Democrats are fresh off of their Nov. 6 election victories giving them majority control of the House next year and Pelosi, who is currently House Democratic leader, wants to lead the party's challenge to President Donald Trump's political and legislative agendas in 2019-2020.

Pelosi, a House veteran from California, is attempting the rare feat of securing the speaker's gavel for a non-consecutive term, having become the first female speaker in U.S. history in 2007.

Her run as speaker ended in 2011, however, when Republicans held a majority in the House.

The House speaker sets the chamber's legislative agenda and is second, behind the vice president, in the line of succession to the president.

A leading critic of Pelosi, Representative Tim Ryan, left a morning session refusing to comment on whether he thought his group of dissenters can stop her from becoming speaker.

Pelosi's detractors have argued that they could control just enough votes to topple her during the vote by the full House.

When the new Congress convenes in January, Democrats will hold at least 233 of the House's 435 seats. Assuming that all Republicans vote against Pelosi for speaker, just 17 or 18 Democratic opponents could be enough to block her from becoming speaker.

In that case, the renegades argue, Democrats would be forced to find another candidate.

Democrats clamouring for fresh faces to rise into House leadership got a boost on Wednesday when Representative Hakeem Jeffries, 48, defeated Representative Barbara Lee, 72, to head the Democratic caucus.

Pelosi has pledged to pursue an agenda next year that includes investing in infrastructure projects, lowering prescription drug prices and changing campaign finance laws to give small donors more sway in elections.

Pelosi also has promised to hold investigations into Trump administration activities following two years of lax oversight by Republicans who will still hold their majority in the Senate.