By John Walcott and Daphne Psaledakis WASHINGTON (Reuters) - The United States hopes North Korea will return the remains of about 50 American Korean War dead within two weeks, the first of thousands President Donald Trump says Pyongyang has promised to hand over, a senior U.S. defence official said on Tuesday. 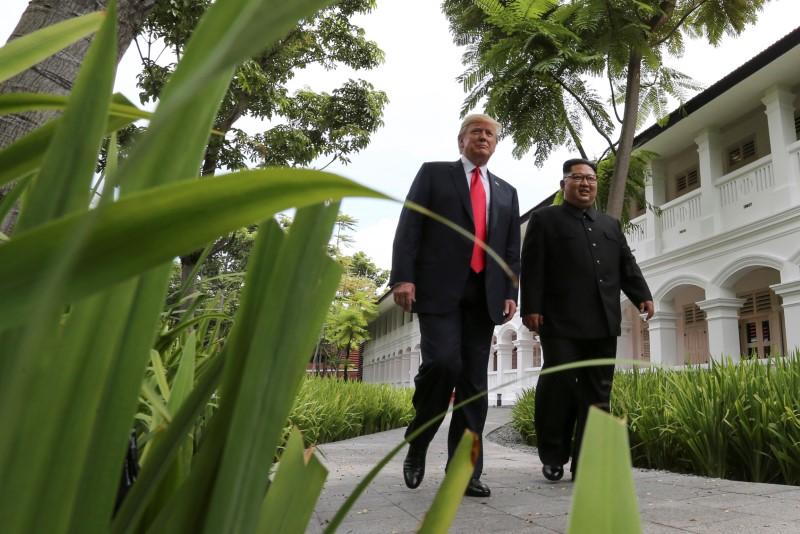 By John Walcott and Daphne Psaledakis

WASHINGTON (Reuters) - The United States hopes North Korea will return the remains of about 50 American Korean War dead within two weeks, the first of thousands President Donald Trump says Pyongyang has promised to hand over, a senior U.S. defence official said on Tuesday.

However, the timing of the handover and the number of sets remains to be returned is still uncertain, in spite of two days of talks between U.S. and North Korean officials on Sunday and Monday, said the official, who did not want to be identified.

U.S. President Donald Trump announced after an unprecedented June 12 summit with North Korean leader Kim Jong Un aimed at persuading North Korea to give up its nuclear weapons that Kim had agreed to return the remains of "thousands and thousands" of Americans killed in the 1950-53 Korean War.

Trump subsequently said the remains of 200 American servicemen had already been sent back, but so far none have been handed over.

U.S. and North Korean officials met on the inter-Korean border on Sunday to discuss the issue and again on Monday.

The first meeting had initially been scheduled for July 12, but the North Koreans failed to show up, the senior U.S. official said, saying this was "a reminder that this process is off to a slow start and isn’t likely to get any faster or easier as we try to repatriate thousands more of our people.”

U.S. Secretary of State Mike Pompeo unveiled the plan for talks on the remains issue after visiting Pyongyang this month to press North Korea to agree to a specific time line for giving up its nuclear weapons.

He touted it as one of the key issues on which the two sides had made progress, though North Korea accused his delegation of making "gangster-like" demands in connection with denuclearisation during the trip, adding to doubts about Pyongyang's intentions.

According to South Korean media, U.S. forces brought about 100 wooden coffins into the Demilitarized Zone between the Koreas last month to prepare for the handover of remains.

The Pentagon declined official comment but said the talks on Monday were to "continue coordination on the transfer of remains already collected in (North Korea) and the recommencing of field operations in (North Korea)."

About 7,700 U.S. military personnel remain unaccounted for from the Korean War, in which the United States fought alongside South Korea against the North.

The Pentagon has said North Korean officials have indicated in the past they have the remains of as many as 200 U.S. troops, but if and when they are handed over, their identities will have to be confirmed at the U.S. casualty identification facility in Hawaii before families can be notified.

The United States conducted joint operations in North Korea to recover remains from 1996 to 2005, but the programme was halted amid rising tensions over Pyongyang's pursuit of nuclear weapons.

The programme helped bring in vital hard currency to North Korea, which has been under U.S.-led sanctions for decades.

According to the Pentagon's Defense POW/MIA Accounting Agency, the United States conducted 33 joint field activities in North Korea between 1996 and 2005.

A Congressional Research Service report said the missions recovered over 220 sets of remains, while the United States paid $28 million to North Korea for assistance in the effort.