WASHINGTON (Reuters) - The United States is closely watching the more infectious variant of COVID-19 after British officials warned that it may also be more deadly, two top U.S. health officials said on Saturday, cautioning more data is needed. Officials are somewhat more worried about a separate variant from South Africa, although it has not yet been identified among U.S 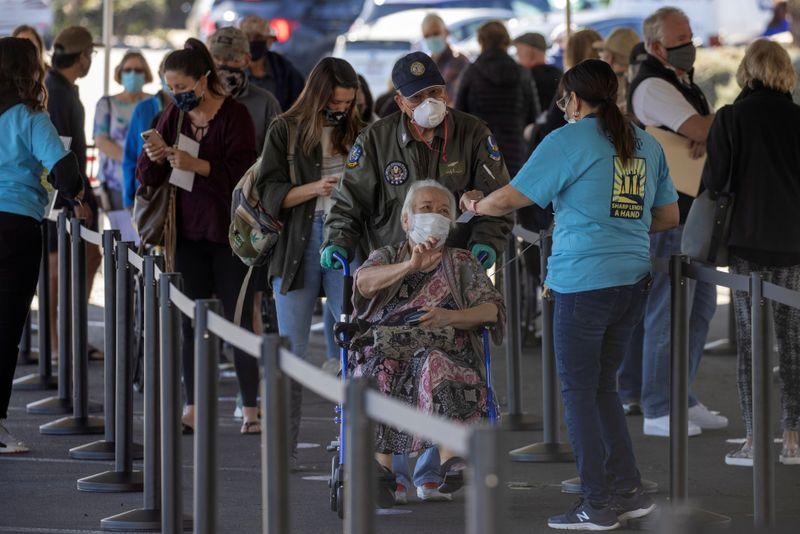 Officials are somewhat more worried about a separate variant from South Africa, although it has not yet been identified among U.S. cases of the novel coronavirus, National Institutes of Health (NIH) Director Francis Collins and Dr. Anthony Fauci, President Joe Biden's top COVID-19 medical adviser, also said.

Collins noted the UK's data was preliminary, and said it was unclear why those with the UK variant faced a higher risk of death, whether by changes in the virus itself or other external causes such as pressures on the healthcare system.

"Let's take this as something to watch closely," he told MSNBC in an interview.

Fauci separately told MSNBC that he needed to see the raw data from the UK before fully assessing the mortality risk and that U.S. officials were weighing how the two new strains could impact vaccine efficacy.

"These are serious situations that we are following very closely and, if necessary, we will adapt to it," Fauci said, adding vaccines could be altered in coming months if needed.

Their comments come as Democratic President Joe Biden takes the reins of the nation's COVID-19 response, seeking to re-energize the fight against the highly infectious disease and urging a war-like stance. In a flurry of actions since taking office Wednesday, Biden unveiled a new U.S. strategic plan to curtail the outbreak and signed numerous executive orders to boost vaccines and increase mask use, among other measures.

The United States is the nation hardest-hit by COVID-19, with 24.70 million cases and 413,775 deaths by midnight Friday. Over the past week, 3,089 Americans have died of the disease on average, while 20 U.S. states reported record deaths this month.

British Prime Minister Boris Johnson on Friday warned that the UK variant was associated with higher level of mortality.

The U.S. Centers for Disease Control and Prevention last week warned the UK variant, already circulating in at least 10 U.S. states, could become the dominant variant in the United States by March. The variant, known as B.1.1.7, is believed to be twice as contagious as the current one circulating nationwide.

"At the moment we are not alarmed about that," Collins said, given that vaccines still appeared effective against it. "We are somewhat more concerned about a South African variant."

Scientists on Wednesday said the South African variant may reduce the efficacy of current vaccines, which also raises the prospect of re-infection.

Britain has banned travelers from some African countries in an attempt to stop the spread of that strain in the United Kingdom and is weighing further restrictions.

Biden has moved to impose a mandatory quarantine for air passengers arriving in the United States, although details have not yet been released. He is also requiring U.S.-bound passengers to have a negative COVID-19 test starting on Tuesday.

Even without a greater mortality risk, more contagious variants increase the pressure on officials to vaccinate the population -- a campaign many state and local officials have said has been slow and chaotic and one Biden has pledged to improve.