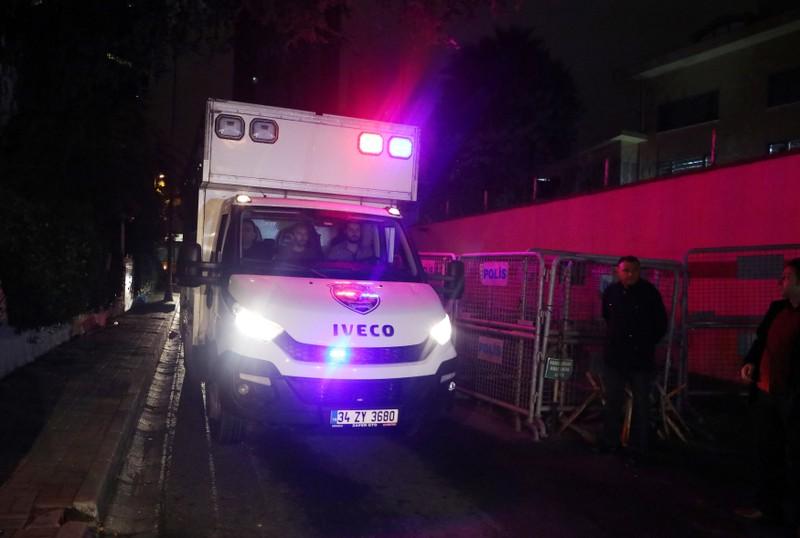 By Steve Holland and Bulent Usta

In Istanbul, Turkish investigators for a second time searched the Saudi consulate where Khashoggi - a U.S. resident and Washington Post columnist who was a strong critic of Crown Prince Mohammed bin Salman - vanished on Oct. 2, seeking clues about an incident that has caused an international outcry.

President Donald Trump met at the White House for less than an hour with U.S. Secretary of State Mike Pompeo, who provided an update on his talks this week with Saudi and Turkish officials. Turkish officials have said they believe the Saudi journalist was murdered at the consulate and his body chopped up and removed.

Referring to the Saudis, Pompeo said he told Trump "we ought to give them a few more days to complete" their investigation in order to get a full understanding of what happened, "at which point we can make decisions about how - or if - the United States should respond to the incident surrounding Mr. Khashoggi."

By casting doubt on whether the United States will respond at all, Pompeo reflected the internal struggle among Trump and his national security advisers on what to do should the Saudi leadership be blamed for what happened to Khashoggi.

Saudi Arabia has denied involvement in the disappearance.

The United States considers Riyadh a linchpin in efforts to contain Iran's regional influence and a key global oil source, and Trump has shown no inclination to mete out harsh punishment to the Saudis.

"I think it's important for us all to remember, too - we have a long, since 1932, a long strategic relationship with the Kingdom of Saudi Arabia," Pompeo told reporters after meeting with Trump, also calling Saudi Arabia "an important counterterrorism partner."

Trump is under pressure including from fellow Republicans in Congress who have said the United States must not let Saudi Arabia escape without punishment.

"Must not accept a strategic alliance with #SaudiArabia which requires our silence when they butcher a political critic," Republican Senator Marco Rubio wrote on Twitter. "We must: 1. Hold everyone responsible for #KashoggiMurder accountable; & 2. Be clear on what is expected moving forward if they want to preserve our alliance."

Mnuchin became the latest Western official to pull out of the investment conference in Riyadh scheduled for Oct. 23-25, joining a list of international officials and business executives. Earlier on Thursday, senior government ministers from France, Britain and the Netherlands withdrew, too.

As of Thursday, the conference was still going on. The spokesman for Saudi Arabia's Public Investment Fund, which is hosting the event, was not immediately available for comment. The organizers could not be reached for comment.

Mnuchin wrote on Twitter he had met with Trump and Pompeo "and we have decided, I will not be participating in the Future Investment Initiative summit in Saudi Arabia."

Pompeo told reporters that he made clear to the Saudis in his visit to Riyadh that "we take this matter with respect to Mr. Khashoggi very seriously."

Turkish investigators left the Saudi consulate in Istanbul early on Thursday after searching the building and consular vehicles, a Reuters witness said. They used bright lights to illuminate the garden. Earlier, they spent nearly nine hours in the Saudi consul's residence along with Saudi investigators.

The Turkish search, which used a drone, included the roof and garage.

The pro-government Sabah newspaper published a series of photos of a man it identified as someone who travels with the Saudi crown prince. The time-stamped photos showed the man outside the Saudi consulate building in Istanbul on the morning Khashoggi disappeared, Sabah said.

Khashoggi went to the consulate seeking documents for his planned upcoming marriage and has not been seen since.

The incident poses a dilemma for the United States and other Western nations, which have lucrative business dealings with the authoritarian kingdom and count on it as a leading Middle East ally and opponent of their common enemy Iran. Saudi Arabia also wields significant influence as the world's top oil exporter.

How Western allies deal with Riyadh will hinge on the extent to which they believe responsibility for Khashoggi's disappearance lies with Prince Mohammed and the Saudi authorities.

Trump, who has forged closer ties with Saudi Arabia and the 33-year-old prince, has speculated without providing evidence that "rogue killers" could be responsible.

"U.N. involvement is the best guarantee against a Saudi whitewash or attempts by other governments to sweep the issue under the carpet to preserve lucrative business ties with Riyadh," said Robert Mahoney, deputy executive director of the Committee to Protect Journalists.

Russian President Vladimir Putin said Moscow did not have enough information about Khashoggi's disappearance to justify harming ties with Riyadh. His government will wait for details, Putin told a forum in the Black Sea resort of Sochi.

A U.S. government source said that U.S. intelligence agencies are increasingly convinced of the crown prince's culpability in the operation against Khashoggi, which they believe resulted in his death.