By Michelle Nichols UNITED NATIONS (Reuters) - U.S. envoy to the United Nations Nikki Haley on Tuesday slammed Arab and Islamic states for talking a lot about supporting the Palestinians but not giving more money to help, calling out countries like Egypt, Kuwait and the United Arab Emirates. 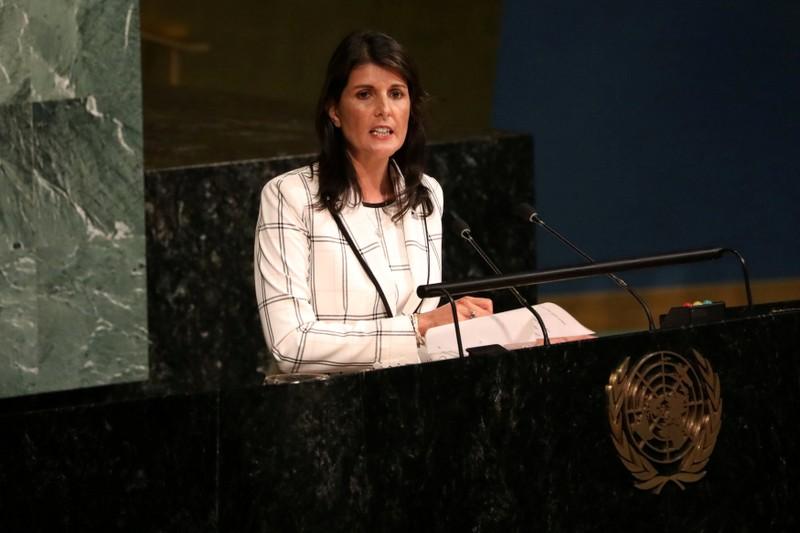 UNITED NATIONS (Reuters) - U.S. envoy to the United Nations Nikki Haley on Tuesday slammed Arab and Islamic states for talking a lot about supporting the Palestinians but not giving more money to help, calling out countries like Egypt, Kuwait and the United Arab Emirates.

Haley listed how much those countries, along with Algeria, Tunisia, Pakistan, Oman, Iran and Turkey, had given - or not given - to the U.N. Relief and Works Agency (UNRWA), which helps Palestinian refugees. Washington, long the biggest donor, cut its aid to $60 million from a promised $365 million this year.

"No group of countries is more generous with their words than the Palestinians' Arab neighbours, and other OIC member states," Haley told a U.N. Security Council meeting on the Middle East, citing the Organization of Islamic Cooperation.

"But all of the words spoken here in New York do not feed, clothe, or educate a single Palestinian child. All they do is get the international community riled up," she said.

Haley also called out China and Russia for talking "a big game about the Palestinian cause" but providing only $350,000 and $2 million respectively to UNRWA in 2017. China's U.N. Ambassador Ma Zhaoxu told the council: "We have no intention of competing with any other countries."

Haley said it was time for the "regional states in particular to step up."

According to IRIN, a nonprofit that reports on humanitarian issues, the UAE and Kuwait were ranked in the top five most generous aid donors compared with national income globally in 2017, while the United States came in at 16.

"With our total donation of more than $125 million just last year, we believe that we are doing our part to address the immediate needs of the Palestinians," she said.

"It is now gone about a year since we discussed this here and we were informed about plans and we haven't seen it yet, Sweden's U.N. Ambassador Olof Skoog, president of the Security Council for July, told reporters. "I think there is a problem that there's no credible plan on the table."