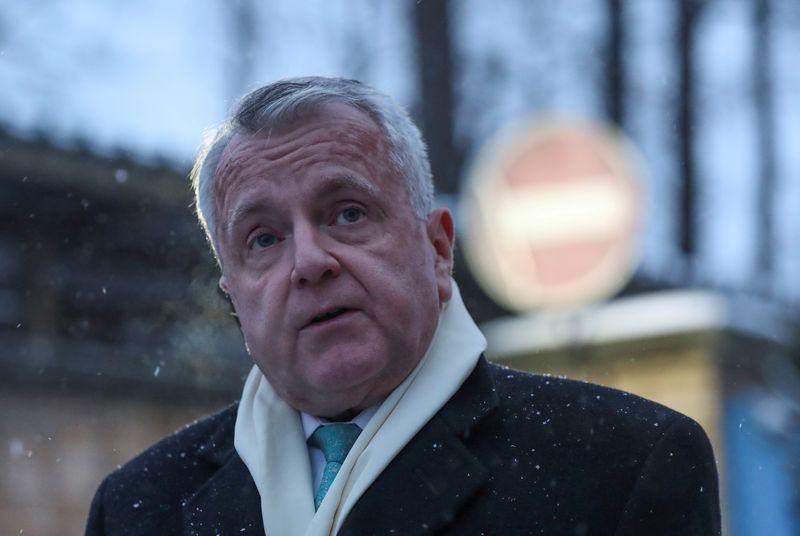 MOSCOW (Reuters) - The U.S. ambassador in Moscow accused Russian authorities on Monday of making a mockery of justice after he was turned away for a second time from what he called a "secret" trial behind closed doors of an ex-U.S. Marine charged with espionage.

Russia last month began the trial of U.S. national Paul Whelan on charges of spying after his arrest by Russian security agents in a hotel room sting operation in December 2018. He denies the charge.

The case, as well as that of Michael Calvey, a U.S. investor charged with embezzlement in Russia, has complicated already strained relations between Moscow and Washington.

Whelan, who also holds British, Canadian and Irish citizenship, faces up to 20 years if found guilty.

The Moscow court had said the trial would involve classified information and would therefore not be open to the public, but U.S. Ambassador John Sullivan said he had tried to attend the hearing in Moscow on Monday and had been turned away.

"The fact that it is a closed hearing, that it is a secret trial – Paul hasn't seen the evidence against him – it makes a mockery of justice," Sullivan said in remarks carried on the U.S. Embassy's website.

He urged Russia's authorities to ensure Whelan would receive a fair and impartial trial, to grant him a phone call to his family and to allow him medical treatment.

"He hasn't been allowed to make a phone call, to speak to anyone in his family in 16 months," Sullivan said.

Whelan, who turned 50 in custody last month, has used his appearances at hearings since his arrest to allege he has been ill-treated by prison guards and also denied medical attention.

Russian authorities have dismissed his remarks and accused Whelan of faking health problems in custody to draw attention to his case.

The trial's preliminary hearings began on March 23 even as many court hearings have been put on hold because of the coronavirus lockdown.

Moscow says Whelan was caught red-handed with classified information, but his lawyer has said he was set up and thought he was receiving holiday photos from a Russian acquaintance.