By David Morgan WASHINGTON (Reuters) - Talks aimed at delivering a fresh infusion of coronavirus relief to American families and businesses gathered momentum in the U.S. 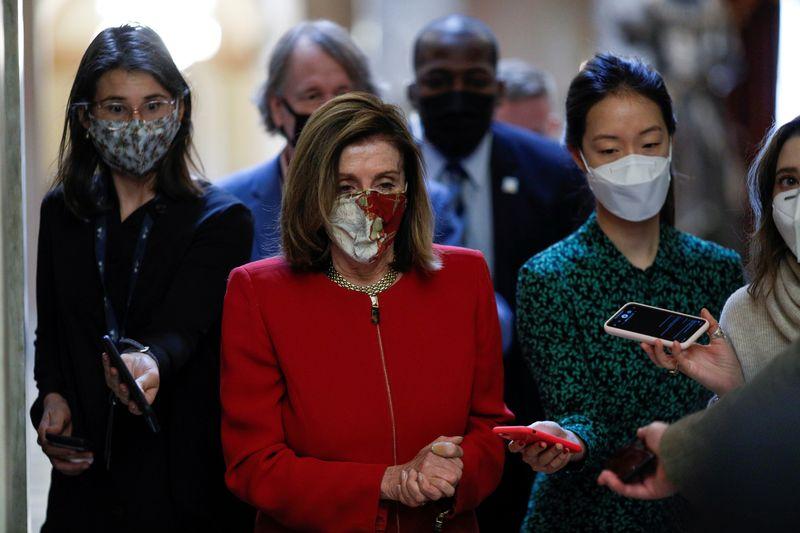 WASHINGTON (Reuters) - Talks aimed at delivering a fresh infusion of coronavirus relief to American families and businesses gathered momentum in the U.S. Congress on Friday, as a bipartisan group of lawmakers worked to put the finishing touches on a new $908 billion bill.

"There is momentum. There is momentum," U.S. House of Representatives Speaker Nancy Pelosi told a news conference, after a government report showed job growth slowing in early November amid a resurgence of coronavirus infections.

Republican and Democratic lawmakers from the House and Senate continued work on a bipartisan bill that congressional leaders view as the basis for COVID-19 legislation they hope to get through Congress next week.

"We're in the middle of drafting as we speak, and so ... Monday is kind of the goal," U.S. Representative Tom Reed, Republican co-chair of the bipartisan Problem Solvers Caucus, told reporters. "This is about making sure that the money is allocated to those that are most in need."

Pressure is mounting on Congress to help people and businesses hit hard by the surging pandemic, which has now infected 14.1 million Americans and killed more than 276,000. Health officials have warned of a dark winter ahead, saying the spread is likely to accelerate into the approaching holiday season.

A range of emergency aid programs set in place in response to the pandemic, including additional unemployment benefits and a moratorium on renter evictions, will expire at the end of December.

"Soon approximately 12 million Americans will lose their unemployment assistance. The fire alarm is sounding on our economy and the only question is whether Congress will respond," the U.S. Chamber of Commerce said on Friday.

Lawmakers enacted $3 trillion in aid earlier this year but have not been able to agree on fresh relief since the spring.

Underscoring the urgency of a new aid package, a government report on Friday showed slowing U.S. job growth in November, with 3.9 million people out of work for at least six months and many giving up.

"The situation requires urgent action," President-elect Joe Biden in a statement that called on the Trump administration and Congress to reach agreement on coronavirus relief.

"But any package passed in the lame duck session is not enough. It's just the start," Biden added. "Congress will need to act again in January."

The bipartisan group has opted not to include stimulus checks for individuals in the $908 billion bill.

But she added that there were still issues to be resolved on the omnibus package.

"The tone of our conversation is one that is indicative of a decision to get the job done," Pelosi said.

Reed told reporters that disagreements over rival COVID-19 demands for state and local government aid from Democrats and liability protection for businesses from Republicans continue to pose issues.

The bipartisan framework, put forward this week by Reed's group and members of the Senate, has won important support from conservative Senate Republicans.

But it is unclear whether McConnell would agree to such a large package after pushing to keep COVID-19 relief spending near the $500 billion mark. Earlier this week, the Kentucky Republican circulated a list of provisions that he said President Donald Trump would be willing to sign.

White House economic adviser Larry Kudlow, speaking to reporters at the White House on Friday, declined to comment on whether the $908 billion bipartisan proposal was too expansive.