(Reuters) - The U.S. death toll from COVID-19 fell 16% to about 7,200 people last week, the first decline in deaths after four weeks of increases, according to a Reuters tally of state and county reports. The country posted more than 376,000 new COVID-19 cases for the week ended August 9, or an average of roughly 53,000 per day 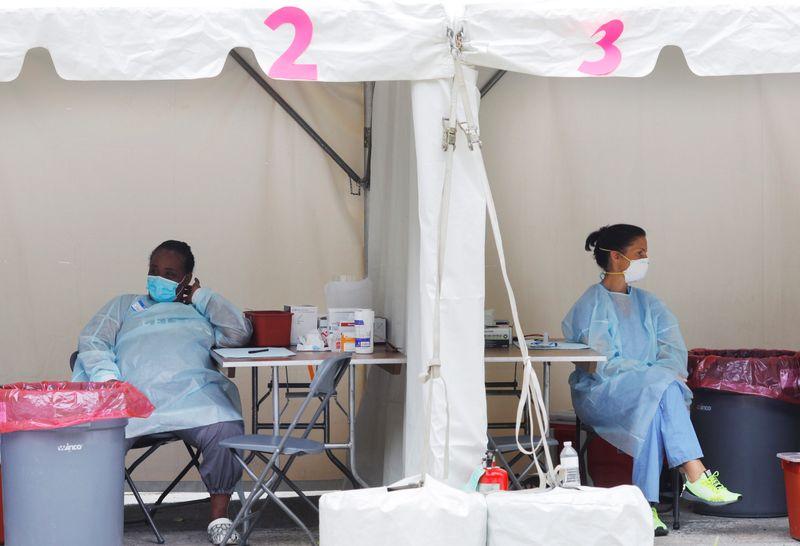 (Reuters) - The U.S. death toll from COVID-19 fell 16% to about 7,200 people last week, the first decline in deaths after four weeks of increases, according to a Reuters tally of state and county reports.

The country posted more than 376,000 new COVID-19 cases for the week ended August 9, or an average of roughly 53,000 per day. New cases have now fallen for three straight weeks, though the United States still accounts for a quarter of the global total of 20 million cases.

Last week's decline in new cases came largely from recent hot spots. For instance, new cases in Arizona fell by more than 48% in the last week, and on Aug. 9 the state reported fewer than 1,000 cases for the first time since June 29.

The rate of community spread in Florida, California and Tennessee remained high, but they all reported fewer cases than in the previous week, according to the Reuters tally. (Open https://tmsnrt.rs/2WTOZDR in an external browser for a Reuters interactive)

Hawaii had kept the virus at bay for most of the summer, but new cases more than doubled last week to over 1,200. On August 6, Hawaii Governor David Ige said he would reinstate inter-island travel restrictions that require people to quarantine for 14 days.

In South Dakota, new cases increased for the third straight week. More than 100,000 motorcycle enthusiasts are expected to travel from all over the country to attend an annual rally in Sturgis, South Dakota, which began on Aug. 7.

Nationally, the share of all tests that came back positive for the novel coronavirus held steady at 8%, according to data from The COVID Tracking Project, a volunteer-run effort to track the outbreak. Mississippi and Texas had the highest positive rates in the country at 21%.

Only 15 states reported a positive rate under 5%, which is the threshold that the World Health Organization considers concerning because it suggests there are more cases in the community that have not yet been uncovered.