By Luc Cohen and Vivian Sequera CARACAS (Reuters) - A conservative U.S. activist has teamed up with a prominent Venezuelan evangelical pastor to bring a $500,000 humanitarian aid shipment to the crisis-stricken country, the two men said in interviews this week 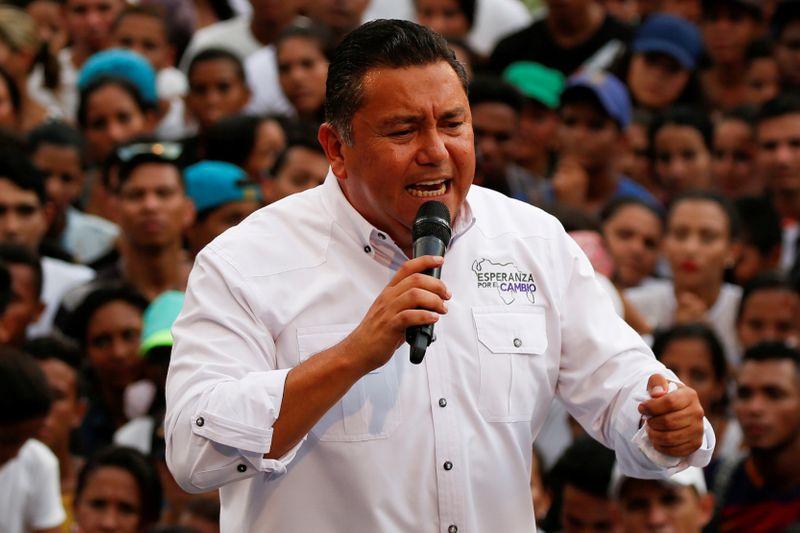 By Luc Cohen and Vivian Sequera

CARACAS (Reuters) - A conservative U.S. activist has teamed up with a prominent Venezuelan evangelical pastor to bring a $500,000 humanitarian aid shipment to the crisis-stricken country, the two men said in interviews this week.

Randy Brinson, an Alabama-based gastroenterologist who also runs a voter-registration nonprofit, said the delivery of two shipping containers filled with medicine and ready-to-eat meals would arrive in January thanks to a deal brokered by the pastor, Javier Bertucci, with Venezuelan President Nicolas Maduro's government.

Bertucci challenged Maduro in a May 2018 vote boycotted by mainstream opposition leaders who called it a sham meant to legitimize a dictatorship. He was also among politicians from small political parties who inked a deal with Maduro earlier this year to try to end the country's deep political crisis.

That group has criticized Trump administration sanctions intended to force out Maduro and promoted aid efforts in the once-prosperous OPEC nation, where six years of economic contraction have prompted millions to emigrate and led to growing child malnutrition.

The opposition parties who hold a majority in Venezuela's congress say the political deal reached by Bertucci and others with the government ignores the will of most Venezuelans, who want Maduro gone.

"No matter what the political outlook is, we've got to find a way to save lives within Venezuela," Brinson, who plans to spend the weekend in Venezuela, said by phone. "To criticise someone finding a way to get food and medicine to the people is not advantageous at all."

Brinson, who ran unsuccessfully for the U.S. Senate seat in Alabama formerly occupied by ex-Attorney General Jeff Sessions, heads up a nonprofit called Redeem the Vote, which he founded in 2006 to register religious U.S. voters. He said he previously worked on humanitarian relief efforts in Zambia, Congo and Honduras.

Bertucci said in a Thursday interview that the aid will be distributed through a network of doctors and volunteers he works with across the country.

Venezuela's Information Ministry did not respond to a request for comment.

Opposition politicians - whose leader, Juan Guaido, is recognized by the Trump administration and dozens of other governments as Venezuela's legitimate president - have accused authorities of using food and medicine distribution for political purposes.

Brinson described this shipment as a trial run, and said he had preliminary plans for two larger shipments if the delivery is successful.