By Patricia Zengerle and David Lawder WASHINGTON (Reuters) - Members of the U.S. Congress scrambled on Saturday to resolve the last obstacles to completing a $900 billion package of legislation to help Americans struggling with the steep health and economic costs of the coronavirus pandemic. 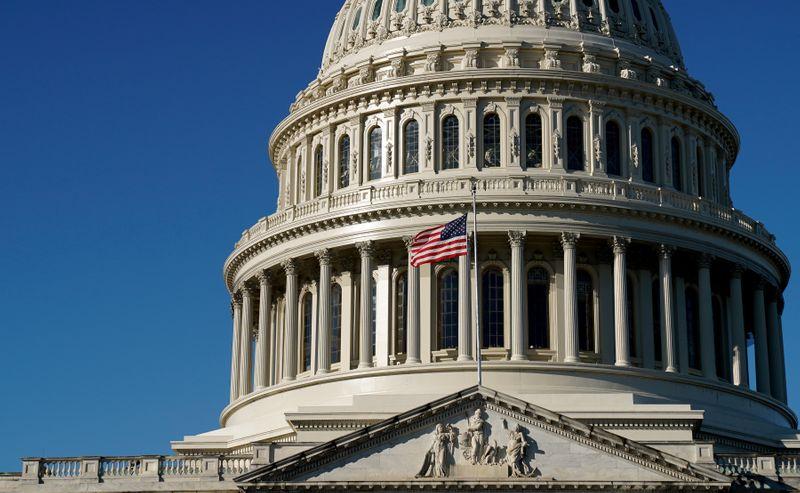 By Patricia Zengerle and David Lawder

WASHINGTON (Reuters) - Members of the U.S. Congress scrambled on Saturday to resolve the last obstacles to completing a $900 billion package of legislation to help Americans struggling with the steep health and economic costs of the coronavirus pandemic.

"We're right within reach," Democratic House of Representatives Speaker Nancy Pelosi told members of her party on a call discussing the overnight deal talks, according to a person who was on the call.

And in the Senate, which held an unusual weekend session as negotiations went on, Republican Majority Leader Mitch McConnell said he hoped for an agreement as soon as Saturday.

"We need to pass these measures with a big, bipartisan vote and get them signed into law without further delay," he said, calling the pandemic "an ongoing five-alarm national crisis."

Both Republicans and Democrats said the last major sticking point was a Republican-led push, spearheaded by Senator Pat Toomey this week, to rein in Federal Reserve lending programs.

"That's the big thing," Pelosi told reporters. "And that's the thing that's harmful to our economy, and pushing back an agreement on this."

Members of Congress are under intense pressure to finish the largest relief package since the early weeks of the pandemic, when Congress approved more than $4 trillion in aid. COVID-19 has killed 311,000 Americans, by far the most in the world, and put millions out of work, with unemployment rising. Economists say growth will likely remain sluggish until vaccines are widely available in mid-2021.

Adding urgency to calls for action are the looming Christmas holiday, a government shutdown possibly at midnight on Sunday and two runoff elections in Georgia on Jan. 5 that will determine whether Republicans keep control of the U.S. Senate.

Lawmakers were not sure when this weekend a deal would be announced, but no vote was expected before Sunday afternoon. John Thune, the Senate's No. 2 Republican, said the vote could slip to Monday, but that the last issues were resolveable.

"We're on the home stretch, we're on the glide path and I think we're going to get this done, and help out the American people," Thune said.

Toomey's proposal would guarantee that the Federal Reserve cannot renew emergency lending programs for small businesses and state and local governments after Jan. 1, when they expire under a coronavirus economic relief bill passed in March.

Republican opponents said those programs are an unnecessary government interference in private business and accused Democrats of seeking to extend them into 2021 as a backdoor way to provide unchecked funds for state and local governments controlled by members of their party.

The administration of Republican President Donald Trump, who insists Biden did not win the Nov. 3 election and talks of running again in 2024, said it supports Toomey's initiative.

The deal does not include liability protections for businesses from coronavirus-related lawsuits, a provision pushed by Republicans that has long been unacceptable to Democrats. Nor does it include the extensive aid to state and local governments Democrats wanted.

Congressional leaders plan to attach the package to a $1.4 trillion spending bill that would fund U.S. government activity through September 2021. Government funding was due to expire on Friday, but lawmakers approved a two-day stopgap bill to buy more time that Trump signed into law late on Friday.