By Susan Cornwell WASHINGTON (Reuters) - After months of feuding, U.S. congressional negotiations over final details of a $900 billion COVID-19 aid bill advanced, although it was unclear whether the work could be completed before a fast approaching weekend deadline. 'We made some progress this morning and we’re waiting to hear back' from the other side, House Speaker Nancy Pelosi, a Democrat, told reporters in the Capitol. 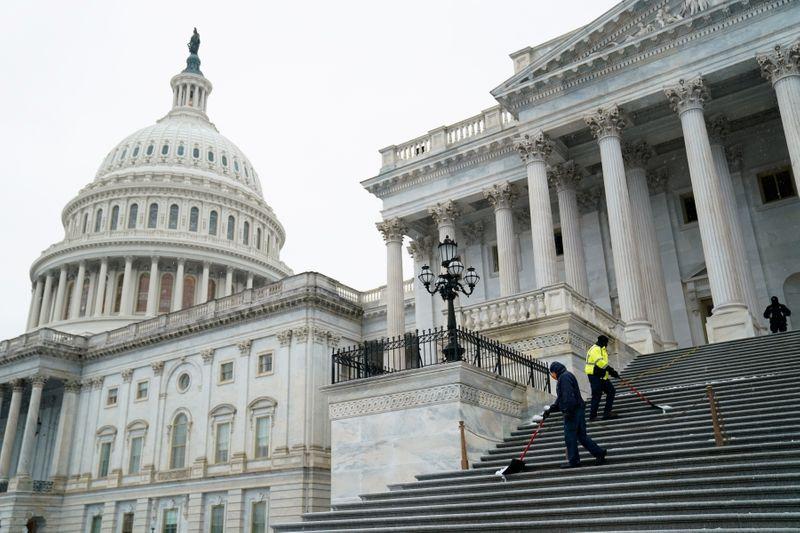 WASHINGTON (Reuters) - After months of feuding, U.S. congressional negotiations over final details of a $900 billion COVID-19 aid bill advanced, although it was unclear whether the work could be completed before a fast approaching weekend deadline.

"We made some progress this morning and we’re waiting to hear back" from the other side, House Speaker Nancy Pelosi, a Democrat, told reporters in the Capitol.

"Hopefully, we will get to an agreement today, put it on the floor, pass it and give some relief in this crisis ... let's hope we can get there," House of Representatives Majority Leader Steny Hoyer told MSNBC.

Two senior House Democratic aides said, however, that the focus was on getting a deal, and not resorting to another stopgap bill.

The legislation is expected to include stimulus checks of about $600, extend unemployment benefits, help pay for vaccine distribution and assist small businesses struggling in a crisis that has killed more than 304,000 Americans and thrown millions out of work.

Congressional leaders want to attach such a proposal to a must-pass $1.4 trillion government funding bill before existing money for federal agencies expires at midnight on Friday.

If the House and Senate are not be able to pass such a hefty bill by Friday night they will need to approve a stopgap funding measure to keep the government operating and give lawmakers a little more breathing space to finalize the coronavirus stimulus bill.

Congress passed $3 trillion in economic aid last spring, but lawmakers have argued ever since about how much more may be needed. With rates of COVID-19 infections soaring to new highs, and with the American economy showing signs of weakening, leaders of both parties in the House of Representatives and the Senate this month began to compromise in hopes of passing a bill.

Hoyer said negotiators were still haggling over emergency aid for nutrition programs, which are stretched during the coronavirus pandemic that has left millions unemployed.

The rough outlines of the legislation emerged from various lawmakers' accounts, but negotiators and aides were still working on several sticking points.

Two contentious issues appear to have been left by the wayside. The measure was not expected to include a dedicated funding stream for state and local governments, which has long been a Democratic priority but opposed by Republicans, or new protections for companies from lawsuits related to the pandemic, something high on the Republican agenda.

But an argument broke out over whether to increase reimbursements from the Federal Emergency Management Agency to local governments for expenses related to COVID-19, like personal protective equipment for schools. Republicans were wary.

"If it’s simply a way of disguising money for state and local governments, we’ll have a lot of opposition," said the Senate's No. 2 Republican, John Thune.

Thune said the proposed direct payments to individuals would be around $600 to $700 per person, roughly half the amount lawmakers approved last spring. Some lawmakers such as Senator Bernie Sanders, an independent who caucuses with Democrats, were pushing for more.

Lawmakers were discussing $300 weekly in federal unemployment benefits - which would also be half the amount passed last spring, that expired in the summer - and about $330 billion to help small businesses, Thune said.

The $900 billion price tag for the package would be paid for by $600 billion in repurposed funds from other parts of the budget, and $300 billion in new money, according to a senator privy to the discussions.