By Nailia Bagirova and Humeyra Pamuk BAKU/WASHINGTON (Reuters) - The United States on Sunday said a new humanitarian ceasefire will take effect on Monday in the conflict between Azerbaijan and Armenia over the enclave of Nagorno-Karabakh, even as fresh fighting erupted between the two sides who blame each other for the failure of previous truces. 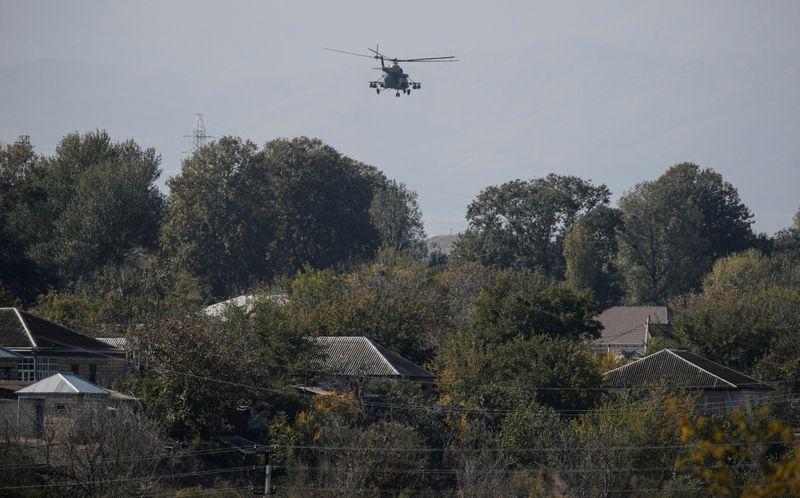 BAKU/WASHINGTON (Reuters) - The United States on Sunday said a new humanitarian ceasefire will take effect on Monday in the conflict between Azerbaijan and Armenia over the enclave of Nagorno-Karabakh, even as fresh fighting erupted between the two sides who blame each other for the failure of previous truces.

The ceasefire is due to take effect at 8 a.m. local time (12 a.m. EDT) on Oct. 26, the U.S. State Department and the governments of Azerbaijan and Armenia said in a joint statement.

The announcement came after U.S. Secretary of State Mike Pompeo held separate meetings with the foreign ministers of Armenia and Azerbaijan in Washington on Friday.

Those meetings were joined by the co-chairs of the OSCE Minsk Group, formed to mediate the conflict and led by France, Russia and the United States, which described them as "intensive discussions" on the ceasefire and the beginning of talks about core elements of a comprehensive solution.

The Minsk Group said its co-chairs and the foreign ministers agreed to meet again in Geneva on Oct. 29.

But the eruption of new fighting on Sunday and the collapse of two previous ceasefires brokered by Russia raised questions about the prospects for this fresh push to end the clashes in Nagorno-Karabakh, a part of Azerbaijan populated and controlled by ethnic Armenians.

The fighting that broke out on Sept. 27 over the disputed territory has surged to its worst level since the 1990s, when some 30,000 people were killed.

Local officials in Nagorno-Karabakh on Sunday accused Azeri forces of firing artillery on settlements in the areas of Askeran and Martuni during the night. Azerbaijan said its positions had been attacked with small arms, mortars, tanks and howitzers.

The defence ministry of the Nagorno-Karabakh region said on Sunday it had recorded another 11 casualties among its forces, pushing the military death toll to 974.

Earlier on Sunday during a meeting with defense officials, Azerbaijan President Ilham Aliyev accused Armenia of bombarding civilian sites and launching two ballistic missiles on the city of Ganja.

World powers want to prevent a wider war that draws in Turkey, which has voiced strong support for Azerbaijan, and Russia, which has a defence pact with Armenia.

Differences over the conflict have further strained relations between Ankara and its NATO allies, with Pompeo accusing Turkey of fuelling the conflict by arming the Azeri side. Ankara denies it has inflamed the conflict.

Sarkissian, in comments reprinted by the Armenpress news agency, called on "global players" to step in immediately to bring about a ceasefire and said Russia was "a trusted and pro-active mediator" between the conflicting sides.

Aliyev said it was "very hazardous" for Armenia to want Russian military support in the conflict and third parties should not get involved militarily.

Russian President Vladimir Putin has said he speaks to leaders of Armenia and Azerbaijan several times a day by phone, and that he hopes the United States will help Moscow broker a solution to the conflict.

About 30,000 people were killed in a 1991-94 war over Nagorno-Karabakh. Armenians regard the enclave as part of their historic homeland; Azeris consider it illegally occupied land that must be returned to their control.