By Stanis Bujakera and Lesley Wroughton KINSHASA/WASHINGTON (Reuters) - Democratic Republic of Congo's new President Felix Tshisekedi won important endorsements from the United States and two African neighbours as international acceptance of his disputed election win grew on Wednesday. Congo's highest court certified opposition leader Tshisekedi on Sunday as the winner of the Dec. 30 poll despite widespread doubts over the credibility of the result. 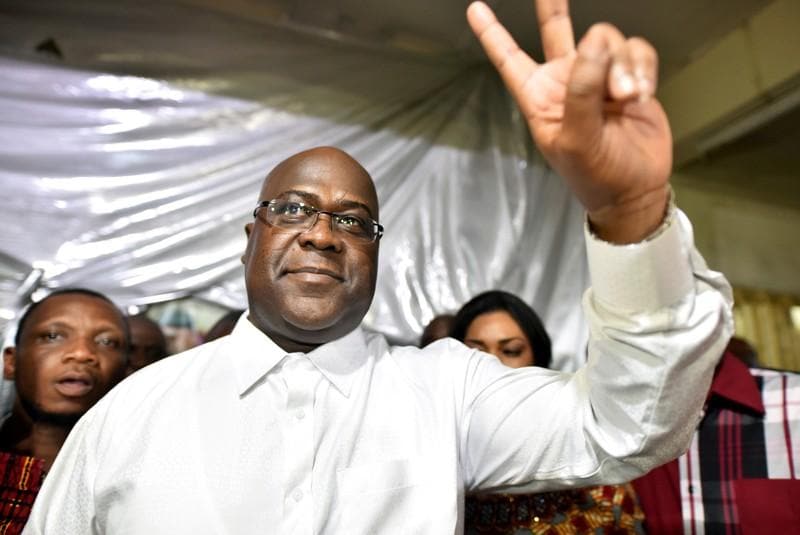 By Stanis Bujakera and Lesley Wroughton

Congo's highest court certified opposition leader Tshisekedi on Sunday as the winner of the Dec. 30 poll despite widespread doubts over the credibility of the result.

Support of international and regional powers is vital to Tshisekedi, who is due to be sworn in on Thursday, as he tries to reduce poverty and stamp out militia violence in the vast central African country.

The United States was among the countries most critical of the election, deploring a lack of transparency and threatening sanctions for interference in the process.

But it changed its tune on Wednesday, following the lead of other international powers who fear a protracted dispute could further destabilise Congo, where wars around the turn of the century sucked in regional armies and led to millions of deaths.

"We are committed to working with the new DRC government ... We encourage the government to include a broad representation of Congo's political stakeholders and to address reports of electoral irregularities."

Angolan President Joao Lourenco wished Tshisekedi "success in carrying out the noble and difficult task entrusted to him by the Congolese people". Angola is a longtime Kinshasa ally but relations were strained during a two-year delay in the election.

The vote was meant to mark the first democratic transfer of power in Congo, where conflicts have long destabilised the region.

President Joseph Kabila, who has governed since his father's assassination in 2001 and overstayed the official end of his mandate by two years, was due to address the nation later on Wednesday.

Congolese sources in contact with senior officials told Reuters that Fayulu, also an opposition leader, had won decisively, but top officials instructed the electoral commission to award the vote to Tshisekedi, seen as more open to compromise with Kabila and his allies.

Tshisekedi and Kabila's camps deny there was a deal or that results were rigged.

The African Union, which last week expressed "serious doubts" about the credibility of the results, said on Tuesday it would work with Tshisekedi's government but declined to congratulate him, as did the European Union.