By Stephanie Nebehay and Emma Farge GENEVA (Reuters) - The United Nations agreed on Friday to step up monitoring of reported rights abuses during Belarus's crackdown on protests, angering Minsk and its ally Moscow and raising the diplomatic stakes in the crisis. During a highly charged debate at the U.N. 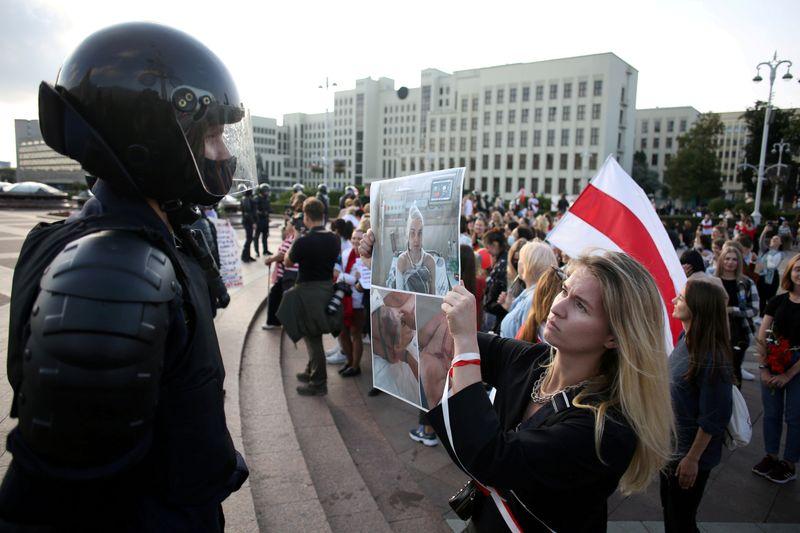 GENEVA (Reuters) - The United Nations agreed on Friday to step up monitoring of reported rights abuses during Belarus's crackdown on protests, angering Minsk and its ally Moscow and raising the diplomatic stakes in the crisis.

During a highly charged debate at the U.N. Human Rights Council, European ministers denounced the repression of demonstrations since Belarus's Aug 9. elections, and Britain's envoy said it would support sanctions. Belarus said the Council's decision on monitoring set "a dangerous precedent".

U.N. rights investigator Anaïs Marin earlier told a meeting of the Council that states needed to act to prevent a major geopolitical rift. "Let's not allow another Iron Curtain to descend on the European continent," she said.

Marin said more than 10,000 people have been "abusively arrested", with more than 500 reports of torture and thousands "savagely beaten", since President Alexander Lukashenko claimed victory in the vote.

Protesters say the election was fraudulent. Lukashenko says he won the vote fairly by a landslide and dismisses accusations of abuses as part of a Western smear campaign.

There were no reports of big demonstrations in Minsk, though the opposition has announced marches for Saturday and Sunday.

A man set himself on fire outside a police station in the town of Smolevichi on Friday, the interior ministry said, though it was not immediately clear if that was linked to the unrest. The ministry said the man had a history of mental illness.

The U.N. debate in Geneva, called to vote on an EU proposal for increased monitoring, was interrupted repeatedly by the delegations of Belarus, Russia, China and Venezuela raising procedural objections.

Russia - there as an observer without voting rights - proposed 17 amendments to the motion, but they were all rejected.

The council agreed - with 23 votes in favour, two against (Venezuela, Eritrea) and 22 abstentions - to give the office of U.N. rights boss Michelle Bachelet a mandate to monitor the situation in Belarus and submit an oral report with recommendations by the end of the year.

The Belarus Foreign Ministry described the vote as a "dangerous precedent" and accused the Council of meddling in its internal affairs.

Belarusian opposition leader Sviatlana Tsikhanouskaya had earlier called in a video message for the monitoring mission, but said she was still open to talks with the government to try and resolve the crisis.

Russia's defence ministry said on Friday that special forces from Russia and Belarus had rehearsed a counter-terrorism scenario involving freeing hostages from a building in their "Slavic Brotherhood 2020" drills.

It said more than 800 military personnel from the two countries were taking part in the training near the Belarusian city of Brest.

During the U.N. debate, Ukraine's foreign minister warned Russia against taking steps that may undermine the sovereignty of Belarus and destabilise the region.

"It is heartbreaking to watch the footage of our close neighbours viciously beaten down and arbitrarily detained on the streets of their native cities," Dmytro Kuleba told the debate.

Wendy Morton, Britain's junior foreign minister, told the talks: "The UK also supports sanctions against those responsible. We are working with our international partners to hold the Belarusian authorities to account."

Internal divisions have up to now hampered an EU push to impose sanctions on Belarus.