By Juan Medina ON BOARD OPEN ARMS, Mediterranean (Reuters) - A woman and a boy adrift in the Mediterranean died just hours before help reached their damaged dinghy, Spanish rescuers said on Tuesday after finding a second woman alive in the vessel, which had been carrying migrants towards Europe. A rescue boat operated by the Spanish charity Proactiva Open Arms, with a Reuters photographer aboard, went to help the three migrants, stranded about 80 nautical miles off Libya's coast, but found two already dead. 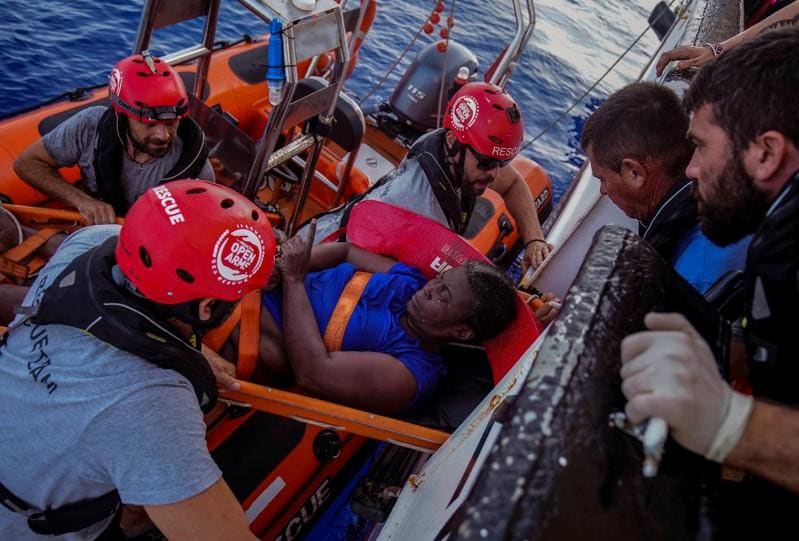 ON BOARD OPEN ARMS, Mediterranean (Reuters) - A woman and a boy adrift in the Mediterranean died just hours before help reached their damaged dinghy, Spanish rescuers said on Tuesday after finding a second woman alive in the vessel, which had been carrying migrants towards Europe.

A rescue boat operated by the Spanish charity Proactiva Open Arms, with a Reuters photographer aboard, went to help the three migrants, stranded about 80 nautical miles off Libya's coast, but found two already dead.

Proactiva Open Arms said the three were left helpless after being abandoned by Libyan coast guards. The Libyans had left the scene after the two women refused to board their patrol ship along with a boy of about four, it said.

Libya's coast guard disputed the account, saying it had rescued 165 migrants from the damaged boat, and recovered the body of one baby. But it offered no explanation for how the three migrants came to be stranded on the remains of the dinghy.

"It is not in our religion, our ethics or our conduct to abandon human lives at sea, where we only came to save them," it said in a statement. The migrants were sunburnt and dehydrated after spending more than 60 hours stranded at sea, it said.

Proactiva Open Arms operates in the deadly central Mediterranean route, where charity boats have been locked out of Italian ports since a vow by Italy's new populist government to crack down on illegal immigration from Libya.

The rescue ship found itself the focus of European political tension this month when it rescued 60 migrants and took them to Barcelona after being turned away by Malta and Italy.

Charity rescuers pulled the woman from the wreckage where she had lain beside the corpses of another woman and the young boy. One rescuer dived into the sea and grabbed her as she clung to the remains of the boat.

"When we arrived we found one of the women still alive. We could do nothing to save the other woman and the boy who appeared to have died a few hours before we found them," said Proactiva Open Arms founder Oscar Camps in a tweet.

Proactiva said the coast guard had intercepted the dinghy, but when it became clear the two women and the boy did not want to board the coast guard vessel, the Libyans damaged the craft and left the three stranded in its remains.

Camps told Reuters TV: "I want to denounce .... the Libyan coast guard that did not know how to manage an emergency situation, arriving two days, two nights late, and abandoned two women and a child in the remains of a vessel that they themselves destroyed."

Camps said a merchant ship sailing in the area had also failed to provide help to the migrant dinghy.

In a criticism of Italy, he added: "This is the direct consequence of not allowing NGOs which rescue lives in the Mediterranean to work there; this is the consequence."

Italian Interior Minister Matteo Salvini, also the head of the far-right League, is leading a high-profile campaign to shut humanitarian ships out of Italian ports. He says any rescue operations off the Libyan coast should be handled by Libya's limited coast guard.

On Tuesday, Italian Prime Minister Giuseppe Conte hit back at Czech Prime Minister Andrej Babis, who on Saturday called the Italian approach to immigration a "road to hell", and reiterated his stance that boats should be turned back and migrants helped in their home countries instead of being let into the European Union.

In an open letter to Babis, whose country refused to take any of the 450 migrants rescued by Italy at the weekend, Conte said Rome had the "high road of legality and shared responsibility", adding "those who set foot in a European country set foot in Europe".

Rome has played a central role in training the Libyan coast guard, which has been accused of abuses, including shooting at aid workers trying to rescue migrants.

Illegal immigration across the Mediterranean has fallen dramatically, with about 50,000 people making it to Europe this year compared to over a million in 2015. Hundreds have nevertheless died trying to make the crossing from Libya.

By Paul Carrel BERLIN (Reuters) - European Union sanctions against 40 officials in Belarus are "a small victory" but should be widened, opposition leader Sviatlana Tsikhanouskaya said on Monday, adding she would press Germany's Angela Merkel to do more at a meeting on Tuesday. Tsikhanouskaya fled her homeland for Lithuania amid a police crackdown in Belarus following an Aug. 9 presidential election, which official results said incumbent Alexander Lukashenko won, but which Tsikhanouskaya's supporters say was rigged

WASHINGTON (Reuters) - White House Press Secretary Kayleigh McEnany said on Monday she tested positive for COVID-19, while several U.S. media outlets reported that a number of other White House staff members also were confirmed to have been infected with the novel coronavirus