Johannesburg: Suggesting a new poaching trend in the heavily-guarded reserve, two lions and over 100 vultures in South Africa's Kruger National Park died after eating the poisoned carcass of an elephant, officials said on Tuesday. 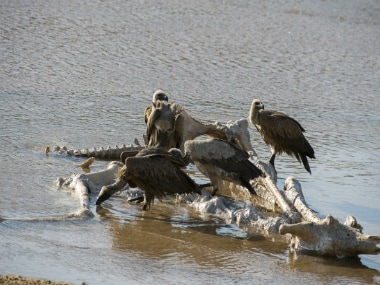 "It seems poachers have resorted to wildlife poisoning in the national parks and other protected areas in Southern Africa," Glenn Phillips, the park's managing executive, said in a statement.

It was unclear when the poisoning occurred, but the animals' carcasses were discovered by rangers at the weekend.

Initial investigations showed the elephant was shot in the head, its tusks removed and its carcass laced with poison.

Two lions, 110 white-back vultures and two jackals then died after feeding on the poisoned carcass. The poisoning left authorities puzzled as to the poachers'ultimate target. Tusks and horns are smuggled to eastern Asian countries where they are highly prized.

Poisoning of wildlife has occurred at a lower level in South Africa compared to its neighbours Zimbabwe and
Mozambique.

In Zimbabwe, more than 370 elephants have died after being poisoned over the past two years, with the deaths blamed on poachers.

The park, which is faced with a poaching crisis targeting rhino, is one of the most heavily-protected in the country.

Rangers are equipped with infra-red binoculars to try and catch poachers who normally operate at night.