By Richard Cowan and David Morgan WASHINGTON (Reuters) - On the second day of House Democrats laying out their case in the U.S. Senate for removing President Donald Trump, there was little sign on Thursday that their arguments had changed any minds among Republican senators who control the chamber. 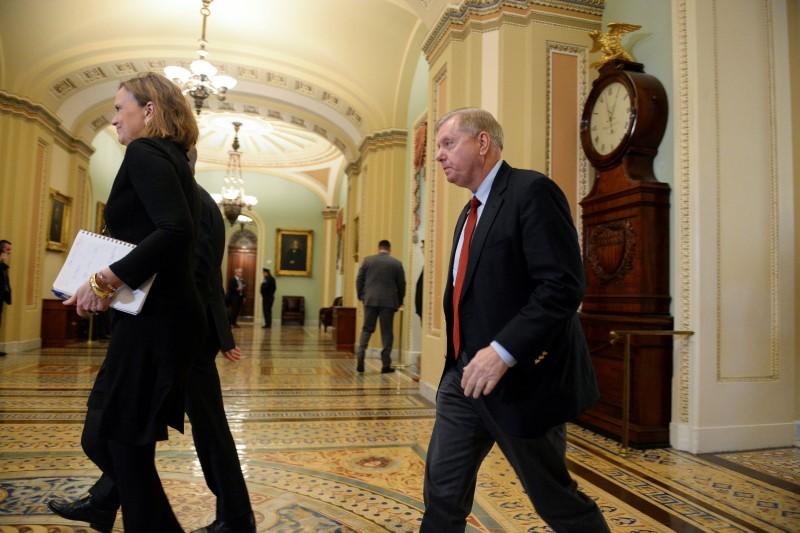 WASHINGTON (Reuters) - On the second day of House Democrats laying out their case in the U.S. Senate for removing President Donald Trump, there was little sign on Thursday that their arguments had changed any minds among Republican senators who control the chamber.

No Republican senators who spoke to reporters during breaks in the proceedings on Wednesday and Thursday said they had heard anything to convince them that Trump's interactions with Ukraine warranted his removal from office. A handful said they had already made up their minds to acquit their party's leader.

Their comments underscore that Trump is almost certain to be acquitted in the third presidential impeachment trial in U.S. history. Democrats have expressed concerns that Republicans, who hold 53 of the Senate's 100 seats, are not keeping an open mind about the evidence they have gathered.

Republicans counter that the Democrats have failed to make their case against Trump.

Democrats in the House of Representatives have accused Trump of withholding military aid and a White House meeting to pressure Ukraine to investigate a political rival, former Vice President Joe Biden, who is seeking the Democratic nomination to face off against Trump in November's presidential election.

Republican Senator Mike Braun of Indiana told reporters he would likely vote to acquit Trump absent surprising new details from the House Democratic lawmakers, who are due on Friday to wrap up their opening arguments on why Trump should be convicted.

"If I don't hear any more information that would sway me otherwise ... that would be for acquittal," Braun said.

The Senate's top Republican, Mitch McConnell, has resisted calling any witnesses or allowing any new evidence to be admitted, angering Democrats who say that a proper trial cannot take place without them.

Given that reality, the seven Democratic impeachment managers led by Representative Adam Schiff have devoted their time since Wednesday to recounting what the House learned in their monthslong inquiry, peppering their presentations with video clips of impeachment inquiry witnesses and Trump himself.

Other Republican senators professed boredom, including Senator Thom Tillis, who said he has made up his mind to acquit Trump and dismissed the House presentation as repetitive.

Several other senators said they did not believe that the allegations against Trump, who has denied any wrongdoing, rose to the level of impeachment, the ultimate sanction against a U.S. president.

Some Republican senators voiced grudging admiration for the Democrats' presentation.

"Quite frankly, I thought they did a good job of taking bits and pieces of the evidence and creating a quilt out of it," said Senator Lindsey Graham, one of Trump's loudest Senate defenders.

But he looked forward to Trump's lawyers' case beginning on Saturday: "What I will tell my colleagues is the other side gets to talk and see if they can pull a thread here and pull a thread there and see if it holds up."

While the U.S. Constitution charges senators to serve as impartial jurors in an impeachment trial, they are afforded far more leeway than jurors in American courts. A juror in a high-profile criminal case who offered their opinion publicly before the trial was over would be tossed from the jury and perhaps face jail time.

Some prominent Republicans, including those facing competitive re-election bids and critics of Trump, said they were holding off on making a decision.

"Sorry, but I'm not going to be commenting on the evidence or process until the entire trial is over," said Mitt Romney, a Utah Republican and sometimes Trump critic.