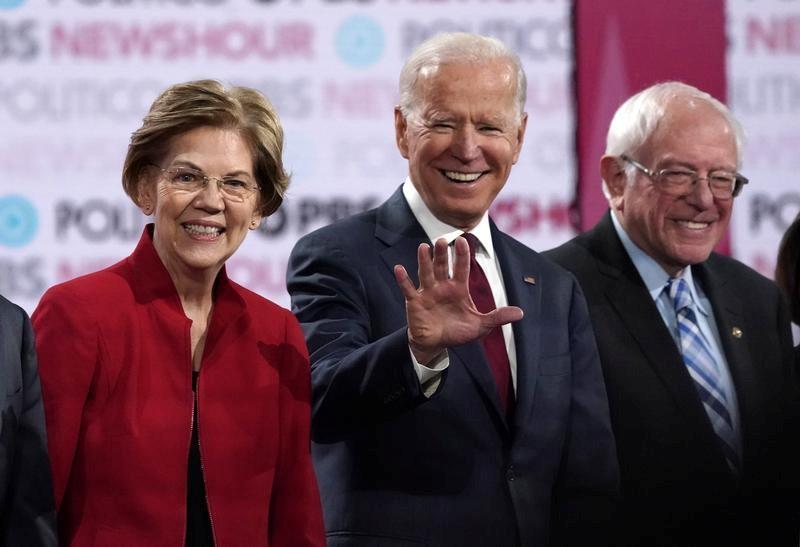 Four candidates have separated themselves thus far from the rest of the field among Democratic voters.

Biden, the early Democratic front-runner in opinion polls, entered the race in April, opening his campaign with a swipe at Trump. Biden, 77, served eight years as President Barack Obama's vice president and 36 years in the U.S. Senate.

He stands at the center of the Democratic debate over whether the party's standard-bearer should be a veteran politician or a newcomer, and whether a liberal or a moderate has a better chance of defeating Trump.

Biden, who frequently notes his "Middle-Class Joe" nickname, touts his working-class roots and ability to work in a bipartisan way.

Some fellow Democrats have criticized him for his role in passing tough-on-crime legislation in the 1990s.

Trump's request that Ukraine's president investigate Biden and his son Hunter Biden is at the center of the Democratic-led impeachment of the president.

The 70-year-old U.S. senator from Massachusetts is a leader of the party's liberals and a fierce critic of Wall Street. She was instrumental in creating the federal Consumer Financial Protection Bureau after the 2008 financial crisis.

Her campaign has surged in recent months, equaling Biden in some polls. She has focused her campaign on a populist anti-corruption message, promising to fight what she calls a rigged system that favors the wealthy.

She has released an array of policy proposals on everything from a Medicare For All healthcare plan to breaking up big tech companies to implementing a wealth tax on the richest Americans. Warren has sworn off political fundraising events to back her campaign.

The U.S. senator from Vermont lost the Democratic nomination in 2016 to Hillary Clinton but is trying again. For the 2020 race, Sanders, 78, is fighting to stand out in a field of liberals running on issues he brought into the Democratic Party mainstream four years ago.

Sanders suffered a heart attack while campaigning in Nevada in October, but there has been little impact so far on his support. His proposals include free tuition at public colleges, a $15-an-hour minimum wage and universal healthcare. He benefits from strong name recognition and an unmatched network of small-dollar donors.

The 37-year-old former mayor of South Bend, Indiana, emerged from virtual anonymity to become one of the party's brightest stars, building momentum with young voters. A Harvard University graduate and Rhodes scholar, he speaks seven languages conversationally and served in Afghanistan with the U.S. Navy Reserve.

He touts himself as representing a new generation of leadership needed to combat Trump. Buttigieg would be the first openly gay presidential nominee of a major American political party.

Recent polls in Iowa and New Hampshire, which hold the first nominating contests in February, have at or near the top even though his national standing is lower.

TRYING TO BREAK THROUGH

The rest of the Democratic field is a mix of seasoned politicians, wealthy business people and others looking to break into or regain their toehold in the top tier of contenders.

Former New York City mayor and billionaire media company founder Michael Bloomberg, 77, formally announced his candidacy in late November. The move was an about-face for Bloomberg, who had said in March that he would not make a run for the White House.

Ranked by Forbes as the eighth-richest American, with an estimated worth of $53.4 billion, Bloomberg will have the advantage of being able to self-finance his campaign and has already poured millions of dollars into advertising and hiring staff.

He has won allies in the Democratic Party with his advocacy and philanthropy on climate change and in fighting gun violence. Bloomberg served as mayor of New York from 2002 to 2013.

The New York entrepreneur and former tech executive is focusing his campaign on an ambitious universal income plan. Yang, 45, wants to guarantee all Americans between the ages of 18 and 64 a $1,000 check every month.

The son of immigrants from Taiwan, Yang supports the Medicare for All proposal, which is based on the existing government-run Medicare program for Americans aged 65 and older, and has called automation the biggest threat facing U.S. workers.

His campaign has released more than 100 policy ideas, including eclectic proposals like creating an infrastructure force called the Legion of Builders and Destroyers.

The U.S. senator from Minnesota was the first moderate in the Democratic field. Klobuchar, 59, gained national attention when she sparred with Brett Kavanaugh during his Supreme Court nomination hearings last year.

On the campaign trail, the former prosecutor and corporate attorney has said she would improve on the Affordable Care Act, popularly known as Obamacare, by adding a public option, and is taking a tough stance against rising prescription drug prices.

The Samoan-American congresswoman from Hawaii and Iraq war veteran is the first Hindu to serve in the U.S. House of Representatives and has centered her campaign on her anti-war stance.

Having previously worked for her father's anti-gay advocacy group and drafting relevant legislation, she later apologized for her past views on same-sex marriage.

Gabbard's populist, anti-war approach has won her fans among the far left and the far right, and she engaged in a Twitter war with Hillary Clinton, who she called the "personification of the rot" after Clinton suggested Gabbard was being groomed for a third-party run at the presidency.

Gabbard, 38, slammed Trump for standing by Saudi Arabia after the murder of journalist Jamal Khashoggi.

A billionaire environmentalist and force in Democratic fundraising over the past decade, Steyer said last January he was focusing on his efforts to get Trump impeached and Democrats elected to Congress.

Steyer, 62, reversed course in July, saying other Democrats had good ideas but "we won't be able to get any of those done until we end the hostile corporate takeover of our democracy."

The former U.S. representative from Maryland became the first Democrat to enter the 2020 race, declaring his candidacy in July 2017. Delaney, 56, says that if elected, he would focus on advancing only bipartisan bills during the first 100 days of his presidency.

He is also pushing for a universal healthcare system, raising the federal minimum wage, and passing gun safety legislation. A former business executive, Delaney is self-funding much of his campaign.

Bennet, 55, a U.S. senator from Colorado, has based his political career on improving the American education system. He previously ran Denver's public schools. Bennet is not well known nationally but has built a network of political operatives and donors helping elect other Democrats to the Senate.

During a partial U.S. government shutdown in January 2019, he garnered national attention criticizing Republicans for stopping the flow of emergency funds to Colorado.

Patrick was a late entry to the race, announcing his candidacy in November just days before early-state filing deadlines. The 63-year-old former Massachusetts governor said he was seeking to draw in Americans who felt left behind and to bridge a party he saw split between "nostalgia" or "big ideas" that left other voices out.

In 2014, Obama said Patrick would make "a great president or vice president." Patrick has said the former president was remaining neutral in the current race.

Trump is the clear favorite to win the Republican nomination, and there has been criticism among his opponents that party leadership has worked to make it impossible for a challenger. Still, the incumbent will face at least two rivals.

The 73-year-old real estate businessman shocked the political establishment in 2016 when he secured the Republican nomination and then won the White House. He was impeached in the House of Representatives for his request that Ukraine carry out investigations that could benefit him politically and for withholding witnesses and documents from the House probe of the issue.

The U.S. Senate is due to hold a trial to consider whether he should be removed from office, but it is unlikely that the Republican-controlled chamber will convict him.

After running as an outsider in 2016, Trump is focusing his policy message on the strong economy, while continuing the anti-immigration rhetoric that characterized his first campaign. He continues to draw enthusiastic crowds at raucous political rallies as he assails Democrats and the news media.

A former congressman, Walsh, 58, has become a vocal critic of Trump, who he argues is not a conservative and is unfit for public office.

Walsh won a House seat from Illinois as a candidate of the Republican Party's fiscally conservative Tea Party movement in 2010 but was defeated by Democrat Tammy Duckworth in his 2012 re-election bid. After leaving Congress, he became a Chicago-area radio talk-show host.

The 74-year-old former Massachusetts governor ran unsuccessfully for vice president in 2016 as a Libertarian. He has been a persistent critic of Trump, saying when he began his 2020 campaign that "the American people are being ignored and our nation is suffering."