ANKARA (Reuters) - Turkey's daily coronavirus death toll hit a record high 141 on Friday, according to the Health Ministry, as the country introduced new nationwide curbs amid a surge in cases in recent weeks. 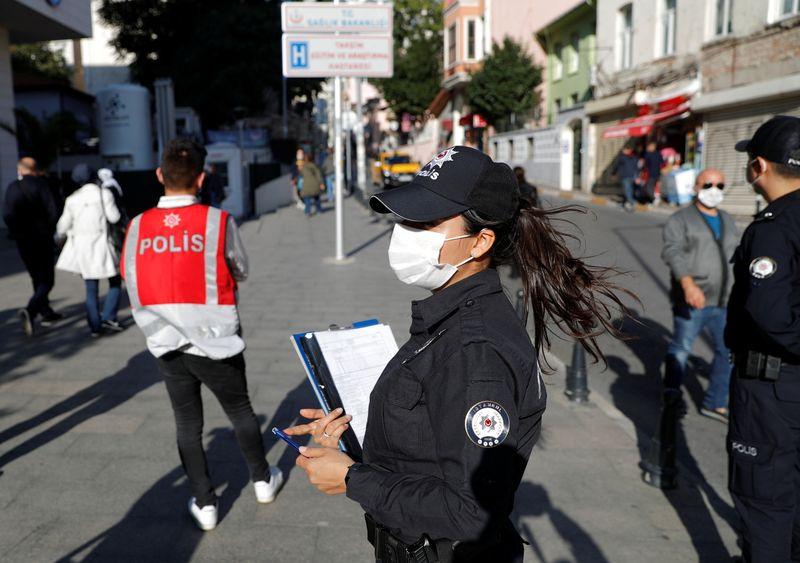 ANKARA (Reuters) - Turkey's daily coronavirus death toll hit a record high 141 on Friday, according to the Health Ministry, as the country introduced new nationwide curbs amid a surge in cases in recent weeks.

Under the new measures announced by President Tayyip Erdogan on Tuesday which became effective at 8 p.m. (1700 GMT), weekend curfews will be introduced and a limit on working hours of restaurants, cafes and shopping malls.

"We were once again obliged to impose restrictions in the battle against the outbreak. If we follow the measures together, if we impose our own restrictions, the battle will be easier," Health Minister Fahrettin Koca said on Twitter.

The government - which since July has not reported confirmed asymptomatic COVID-19 cases - said on Friday that there were 5,103 new symptomatic patients in Turkey, the second highest new daily figure since the beginning of the pandemic. It showed the overall death toll rose to 12,084.

Medics and opposition lawmakers have criticised the decision to only report symptomatic cases, saying it hides the true scale of the outbreak.

The Turkish Medics Association (TTB) said on Friday that its own calculations based on data from 1,270 medics in 76 different provinces showed daily COVID-19 cases had surged to more than 47,500. It reported a 300% increase in coronavirus cases in November.

Friday's Health Ministry data showed 435,273 total COVID-19 cases in the country since the beginning of the pandemic.