Tunisia says it will coordinate Arab response to U.S. move on Golan

TUNIS (Reuters) - Tunisia will coordinate with fellow Arab countries to contain any fallout from the U.S. decision to recognise Israeli sovereignty over the Golan Heights, Foreign Minister Khemaies Jhinaoui said on Friday. He was speaking to a meeting of Arab ministers ahead of the annual Arab League summit, hosted this year by Tunisia and likely to focus on Washington's decision and its earlier move to recognise Jerusalem as Israel's capital 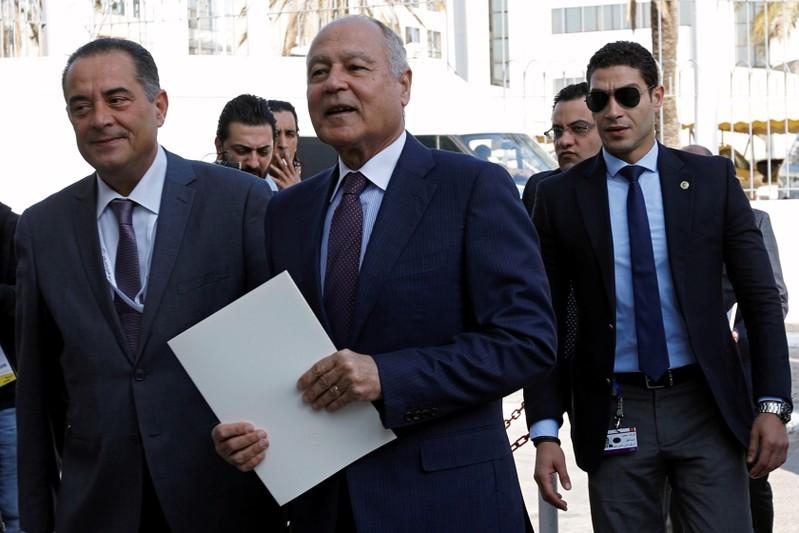 TUNIS (Reuters) - Tunisia will coordinate with fellow Arab countries to contain any fallout from the U.S. decision to recognise Israeli sovereignty over the Golan Heights, Foreign Minister Khemaies Jhinaoui said on Friday.

He was speaking to a meeting of Arab ministers ahead of the annual Arab League summit, hosted this year by Tunisia and likely to focus on Washington's decision and its earlier move to recognise Jerusalem as Israel's capital.

"We will work with fellow Arab countries and the international community to contain the expected repercussions of this decision in the various regional and international forums," Jhinaoui told the meeting in Tunis.

He did not elaborate, but Arab countries want Washington to retract its decision, and to stop other countries following suit.

But a person familiar with the matter said Washington's decisions did not appear to have blocked behind-the-scenes security contacts developed in recent years between Israel and the United States’ Gulf Arab allies over their common enemy, Iran.

Tunisia currently holds the rotating presidency of the Arab League and is vying for one of the rotating non-permanent seats on the U.N. Security Council.

Israel captured the Golan Heights from Syria and Arab East Jerusalem from Jordan in the 1967 Middle East war and annexed both in moves not recognised internationally.

A spokesman for the summit said Arab heads of state were expected to renew their commitment to an Arab initiative that calls for peace with Israel in exchange for full withdrawal from all lands occupied in 1967, but would reject any proposal that is not in line with U.N. resolutions.

Mahmoud Al-Khmeiry appeared to be referring to a still-unannounced U.S. peace plan by White House adviser Jared Kushner and Trump son-in-law which Palestinians have refused to discuss.

Saudi Foreign Minister Ibrahim al-Assaf told the gathering that Saudi Arabia considered the Palestinians' quest for statehood in Israeli-occupied territory - peace talks have been stalled for five years - to be the central cause for all Arabs.

But Assaf singled out what he described as the Iranian threat as the main challenge facing Arabs, calling for action to confront Tehran.

"One of the most dangerous forms of terrorism and extremism is what Iran practises through its blatant interference in Arab affairs, and its militias ... the Revolutionary Guards in Syria, Iraq, Lebanon and Yemen, which requires cooperation from us to confront it," he said.

Iran has denied posing any such threats.

Saudi Arabia is leading a Sunni Muslim coalition that intervened in 2015 in Yemen's war against the Houthis to restore the internationally recognised government ousted from power.

Assaf also voiced Saudi support for Syria's territorial integrity and a political solution to its war based on dialogue between the opposition and government, but said a unified Syrian opposition should emerge before the start of any dialogue.

Syria's membership of the Arab League has been suspended it descended into violence in 2011 after Arab Spring protests.

President Bashar al-Assad's government, backed by Russia and Iran, has regained control over most of the country after years of fighting that has killed hundreds of thousands of people.

Five sources told Reuters last month that the United States had been lobbying Gulf states to hold off restoring ties with Syria, including the UAE, which has moved closer to Damascus to counter the influence of its rival Iran.

(Reporting by Maher Chamytelli in Dubai and Omar Fahmy and Hesham Hajali in Cairo; Writing by Sami Aboudi; Editing by Kevin Liffey)