By John Whitesides WASHINGTON (Reuters) - Democratic presidential primaries in four states are set for Tuesday despite growing worries about the coronavirus outbreak, which has prompted other states to postpone or consider delaying future voting and forced candidates Joe Biden and Bernie Sanders off the campaign trail. 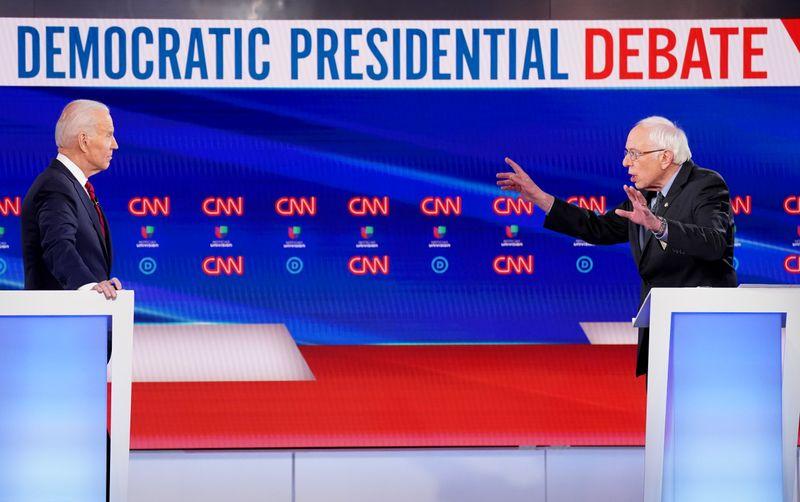 WASHINGTON (Reuters) - Democratic presidential primaries in four states are set for Tuesday despite growing worries about the coronavirus outbreak, which has prompted other states to postpone or consider delaying future voting and forced candidates Joe Biden and Bernie Sanders off the campaign trail.

State officials have said the primaries in Ohio, Illinois, Florida and Arizona would be held as planned, and Ohio's top election official reconfirmed that plan on Sunday night.

But new doubts surfaced after the U.S. Centers for Disease Control and Prevention on Sunday recommended cancellation of gatherings of 50 or more over the next eight weeks.

The rapidly spreading virus has shut down schools, restaurants and sporting and cultural events. Georgia and Louisiana have already postponed primaries that had been set for March 24 and April 4, respectively.

Alabama's top election official on Sunday said he had asked the state attorney general whether the state government has the legal authority to postpone its March 31 runoff primary election between Republican U.S. Senate candidates Jeff Sessions and Tommy Tuberville.

"The March 31 Runoff Election must be postponed," the office of Alabama Secretary of State John Merrill said in a statement.

But Ohio's top election official, Secretary of State Frank LaRose, said his state was ready for Tuesday's election. "We will run a safe, fair election on Tuesday," he wrote in a Twitter post late on Sunday.

LaRose is expected to brief reporters about election preparations and public safety at a news conference with Governor Mike DeWine later on Monday.

Arizona Secretary of State Katie Hobbs wrote on Twitter on Monday that the state government was working to keep election day "safe and accessible."

In a joint statement on Friday, the chief elections officials of Ohio, Illinois, Florida and Arizona said the primaries would go on and that there was no elevated danger in voting.

Safety guidance from voting machine makers and health officials had been provided to polling locations, they added.

"We are confident that voters in our states can safely and securely cast their ballots in this election, and that otherwise healthy poll workers can and should carry out their patriotic duties on Tuesday," the officials said.

"I would hope that governors listen to the public health experts," Sanders said in an interview with CNN after his one-on-one debate with Biden.

"I'm thinking about some of the elderly people who are sitting behind the desks, registering people, doing all that stuff. Does that make a lot of sense? Not sure that it does."

The primaries in the populous states of Florida, Illinois and Ohio, as well as Arizona, could give front-runner Biden a nearly unassailable lead over Sanders, a self-styled democratic socialist, in the number of delegates who in July will pick the Democratic challenger to Trump in the Nov. 3 election.

Prominent leaders and groups in the Democratic Party have been coalescing around Biden. On Monday, he picked up endorsements from Illinois Governor J.B. Pritzker and from the International Longshoremen’s Association, a large maritime workers' union based in New Jersey.

The outbreak has dramatically upended normal presidential campaign routines, forcing both remaining candidates off the road. Both Biden and Sanders plan to hold "virtual" campaign events on Monday in an effort to reach voters.

The contenders held their first face-to-face debate in a CNN Washington television studio with no audience, to limit possible virus exposure. Onstage, they smiled and shared an elbow bump, abiding by health officials' advice to avoid handshakes.

Both candidates accused Trump of contributing to growing worries by spending weeks minimizing the threat before declaring a national emergency on Friday.

"The first thing we have to do, whether or not I am president, is to shut this president up right now," Sanders said. "He is undermining the doctors and scientists who are trying to help the American people."