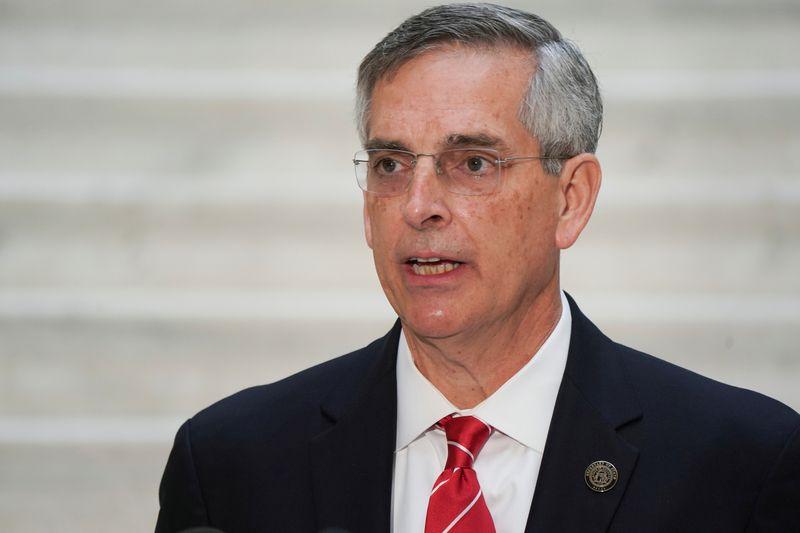 CUTHBERT, Ga. (Reuters) - Georgia's secretary of state, Brad Raffensperger, says he was just following the law when he rejected claims by Donald Trump, his fellow Republican, that the president's election defeat was the result of widespread fraud.

Trump returned the 65-year-old former businessman to the limelight when he called Raffensperger on Saturday to badger him to "find" enough votes to reverse Democratic President-elect Joe Biden's victory in the state, according to audio of the call published by the Washington Post on Sunday.

As Georgia's top election official, Raffensperger oversaw multiple recounts of the Nov. 3 ballots, each of which reached the same result - that the southern state had narrowly favored a Democratic presidential candidate for the first time in a generation.

In the face of Trump's unsubstantiated claims, Raffensperger echoed the findings of his counterparts across the United States that there was no evidence of widespread election fraud.

Interviewed on ABC's "Good Morning America" on Monday, Raffensperger said the White House had pushed him against his better judgment to take Trump's call.

"Did you consider it a lawful request when the president asked you to find the votes?" Raffensperger was asked.

"I'm not a lawyer. All I know is that we're gonna follow the law, follow the process. Truth matters, and we've been fighting these rumors for the last two months," he replied.

Having for weeks pushed back against Trump's unfounded claims of fraud, he told Trump on the call on Saturday that the vote showed Biden was the rightful winner.

"Well Mr. President, the challenge that you have is the data you have is wrong," Raffensperger could be heard telling Trump on the recording of Saturday's call.

Raffensperger and his colleagues for weeks had warned that Trump's rhetoric placed them in danger.

Noting Raffensperger's wife had been getting sexualized threats, he added, "It has all gone too far. It has to stop."

It was unclear if the state had taken security measures around Raffensperger after the threats emerged.

After years as a civil engineer and successful businessman, Raffensperger served two years on a city council and four years in Georgia's House of Representatives before succeeding Kemp in 2018 as the top election official.

Acquaintances of Raffensperger in the state House described him as a "straight shooter" who backed traditional Republican priorities, supporting a bill to cut regulations on small businesses, for example, and voting against a tax on gasoline, according to a profile in the Atlanta Journal-Constitution.

A lifelong Republican, Raffensperger was an early supporter of Trump in 2016, and the president returned the favor by endorsing him for secretary of state. But whatever goodwill existed between the two men has since disappeared.

"Brad Raffensperger: he's not some liberal. Like he's no hero of mine," Hillary Rosen, a Democratic strategist, said on CNN. "He is a solid conservative Republican standing up to the president. That's what makes it so significant."

Perdue and Loeffler themselves are locked in tight campaigns ahead of Tuesday run-off elections that will determine which party controls the U.S. Senate.

Raffensperger has come under fire from the party establishment across the state for not bending to Trump's will.

Ronald Ham, the Republican party's head in rural Brantley County, said Raffensperger should take Trump's allegations about voter fraud more seriously. He said there were discussions among some party leaders about recalling him.

"I've been a little too critical of Brad, but where there is so much smoke I would want to verify," Ham said. "He's a good guy, but he won't survive re-election if he gets that far."

Raffensperger told the Atlanta Journal-Constitution in late November that he and his wife of 44 years had leaned on their faith to cope with the pressure.