Trump's lawyers to present case for his acquittal in impeachment trial

By David Morgan and Richard Cowan WASHINGTON (Reuters) - Donald Trump's defense lawyers will argue at his impeachment trial on Friday that the former president should be acquitted of inciting last month's deadly riot at the U.S. 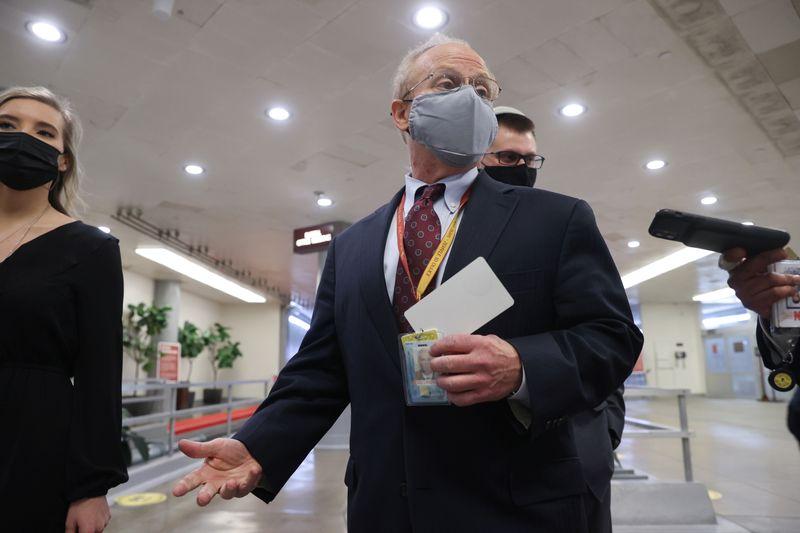 WASHINGTON (Reuters) - Donald Trump's defense lawyers will argue at his impeachment trial on Friday that the former president should be acquitted of inciting last month's deadly riot at the U.S. Capitol, as the Senate races toward a final vote as soon as Saturday.

David Schoen, one of Trump's lawyers, said the defense team would take three to four hours to lay out its case against convicting Trump for inciting the Jan. 6 riot, which sent lawmakers scrambling for safety and resulted in the deaths of five people, including a police officer.

Trump's lawyers have argued his rhetoric was protected by the U.S. Constitution's free speech guarantee and that prosecutors had not directly connected the actions of the rioters to Trump.

Democratic prosecutors wrapped up their case on Thursday, arguing that Trump knew what would happen when he exhorted supporters to march on the Capitol and "fight like hell" as Congress gathered to certify Democrat Joe Biden's victory in the Nov. 3 election, and that the Republican former president should be held accountable.

Trump has falsely claimed that Biden's victory in November was the result of widespread fraud.

Defense lawyer Bruce Castor said on Friday he would argue that the prosecution had not shown that Trump was responsible for the storming of the Capitol.

Trump lawyer Schoen told reporters on Thursday night the former president's words in his speech on Jan. 6 did not add up to incitement.

"It's a powerful speech, but when you use the word fight most of the times during the case, it's clear he's talking about legislators fighting for our rights, people fighting to advocate," he said.

The Democratic-controlled House of Representatives charged Trump on Jan. 13 with inciting the insurrection, but Democrats are unlikely to get a conviction in the evenly-divided Senate or to bar Trump from running for office again.

Conviction requires a two-thirds majority in the 100-member Senate, which means at least 17 Republicans would have to defy Trump despite his continued popularity among Republican voters.

If Trump is acquitted, the Senate could decide to censure him or even vote to bar him from holding public office again. Asked on Thursday about pursuing the latter option, Senate Majority Leader Chuck Schumer said that decision would have to wait until the end of the trial.

On Tuesday, the Senate voted largely along party lines to move ahead with the impeachment trial even though Trump's term ended on Jan. 20. Six Republican senators sided with Democrats.

In their arguments, the Democratic prosecutors provided numerous examples of Trump's actions prior to the rampage to illustrate what he intended when he told his supporters to go to the Capitol on Jan. 6.

Senior aides to the Democratic prosecutors said they expected defense lawyers on Friday to show videos of heated rhetoric from other politicians, including Democrats, in an effort to show equivalency to Trump's remarks.

"They really believe that the logical conclusion of the law is that a president who has lost an election can incite mob violence, can direct his followers to ransack the Capitol to stop a peaceful transfer of power and that there is nothing the United States Senate can do about it," one of the aides said.

DID IT CHANGE ANY MINDS?

Several Republican senators have praised the presentation of the prosecution, although they questioned whether it had changed any minds. Republican Senator Mike Braun tweeted that he still believed it was unconstitutional to remove a former president from an office he no longer held.

The Senate in a 56-44 vote on Tuesday determined that it did have the power under the U.S. Constitution to hold an impeachment trial for a former president. Democrats had argued that without that, presidents would have essentially unchecked power in their final weeks in office.

Three Republican senators who are sitting as jurors at the trial - Ted Cruz, Lindsey Graham and Mike Lee - met with the Trump defense team on Thursday night to discuss its legal approach, a source familiar with the meeting said.

Republican Senator Bill Cassidy told reporters he wanted to hear the defense respond to the timeline laid out by House prosecutors detailing Trump's inaction as the riot developed and his call to a senator even as lawmakers were being evacuated.

"Now, presumably since we were at that point being evacuated I think ... there was some awareness of the events," Cassidy said. "And so what I hope the defense does is explain that."

Neither side has so far announced an intention to call witnesses, leaving senators on track for final arguments and a vote as soon as Saturday.

Trump is the first U.S. president to be impeached twice and the first to face trial after leaving office. His first impeachment trial, which stemmed from his efforts to pressure Ukraine to investigate Biden, ended in an acquittal a year ago in what was then a Republican-controlled Senate.