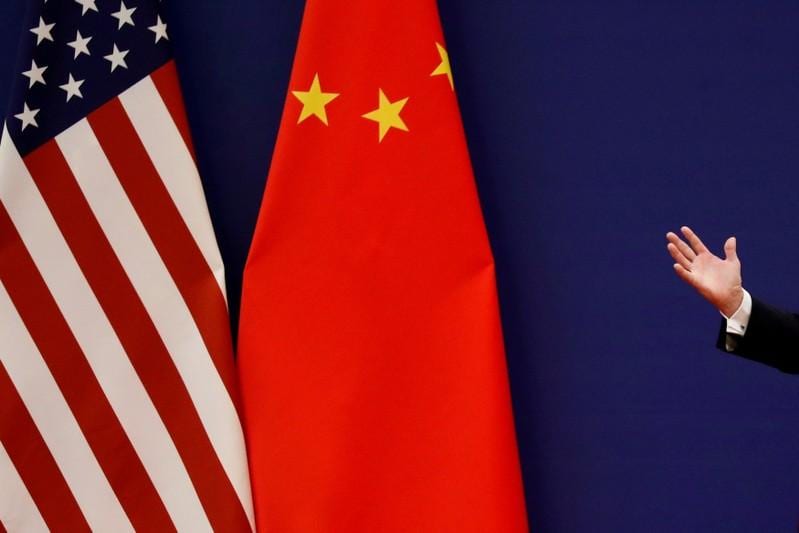 National security adviser John Bolton, long considered a China hawk, has played a key role in persuading Trump to take a tougher approach toward Beijing that goes beyond the bitter trade war between the world’s two biggest economies and includes disputes such as cyber activities, Taiwan and the South China Sea, two officials told Reuters.

While the strategy is still taking shape, the push against China is expected to bring further sharp U.S. rhetoric and unspecified policy actions in coming weeks, according to one of the officials, who spoke on condition of anonymity.

The White House did not address Reuters questions on these points.

Trump’s claim at the United Nations on Wednesday that China was trying to sway the Nov. 6 U.S. congressional elections against his Republican Party to punish him over trade, without offering any evidence, came at time of increasingly tense relations between Washington and Beijing.

It also raised questions as to whether Trump was trying to deflect attention from an investigation of his campaign’s possible ties to alleged Russian meddling in the 2016 presidential election and also set up China for the blame if Republicans do poorly in the midterm vote, which will determine whether they keep control of Congress.

The senior official insisted, however, there was a growing sense within the White House that Trump needed to issue a high-profile reminder that China was another powerful rival, besides Russia, waging “hybrid warfare” against U.S. interests.

Among recent points of conflict was Washington’s sanctioning of a Chinese military agency and its director for buying fighter jets and a missile system from Russia, in breach of U.S. sanctions on Moscow. Beijing on Saturday summoned the U.S. ambassador in Beijing and postponed joint military talks.

'INCREASED PRESSURE ACROSS THE BOARD'

The Trump administration is looking to push back harder against China on several fronts, including so-called political “influence operations,” an issue on which Trump recently has been given a lot more information in his intelligence briefings, according to the official.

“We are in a spot where we can start acting with increased pressure across the board, especially because of trade action,” the official said.

Washington has long identified China as a major culprit in the cyber hacking of U.S. government and corporate databases, but U.S. officials and independent analysts say they have not detected the kind of systematic political campaign, including manipulation of social media, that Russia is alleged to have conducted during the 2016 election.

China has strongly denied any effort to interfere in the U.S. elections, calling such accusations “slander.”

On Wednesday, the only specific action by China that Trump cited was that it was "placing propaganda ads" in U.S. newspapers, referring to a Chinese government-run media company's four-page supplement in the Sunday Des Moines Register promoting the mutual benefits of U.S.-China trade.

Iowa, which voted for Trump in 2016, is a state whose farmers face damage from any protracted trade war, which has already featured billions of dollars in tit-for-tax tariffs.

However, the practice of foreign governments buying space in U.S. newspapers to promote trade is common and differs from a clandestine operation run by a national intelligence agency.

"The Chinese government uses all kinds of methods to try to get us to turn back our policies," a White House National Security Council spokesman said when asked for comment.

"They are targeting tariffs and retaliation at farmers and workers in states and districts that voted for President Trump, and they are using other political, economic, commercial, military, and media tools to benefit the interests of the Chinese Communist Party."

The Trump administration appears determined to push back more broadly, even at the risk of a harsh response from Beijing.

Washington, for instance, is considering tougher action against Chinese cyber theft and cyber espionage, the U.S. official said, but declined to provide details.

Earlier this week, the U.S. military showed it was willing to continue bucking China’s claim to the disputed South China Sea when it flew B-52 bombers over the strategic waterway,

China was angered this week when the United States approved the sale of spare parts for F-16 fighter planes and other military aircraft worth up to $330 million to Taiwan, which China considers a wayward province.

U.S. officials, meanwhile, are increasingly concerned that China is no longer fully enforcing some sanctions on North Korea, and say they intend to keep up pressure in this area.

But some analysts questioned the wisdom of going too far.

“Friction and leverage can be useful tools in international relations if used judiciously, particularly in response to problematic behaviour like China’s,” said Daniel Russel of the Asia Society Policy Institute, who was until last year the State Department's top diplomat for East Asia.

“But an aggressive, frontal assault across sectors is unlikely to succeed, particularly against a country as large and powerful as China,” he said.