By Brendan Pierson NEW YORK (Reuters) - Lawyers for U.S. President Donald Trump asked a federal appeals court on Friday to block Deutsche Bank AG and Capital One Financial Corp from handing the financial records of the president's family and the Trump Organization to Democratic lawmakers. 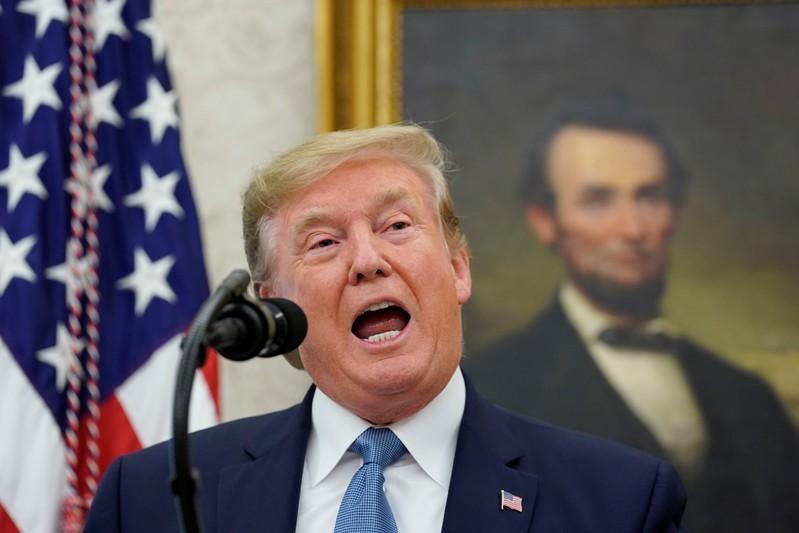 The case, before the 2nd U.S. Circuit Court of Appeals in Manhattan, is one of several legal battles between the Democrats, who took control of the U.S. House of Representatives in January, and the Republican president, who is seeking re-election in November 2020.

In subpoenas issued in April, Democratic lawmakers asked the banks for records related to Trump, his adult children and the Trump Organization. U.S. District Judge Edgardo Ramos in Manhattan ruled in June that the subpoenas could be enforced.

Patrick Strawbridge, a lawyer for the Trumps, told the appellate panel that the committees did not have a "legitimate legislative purpose" for the subpoenas, which he described as too broad.

"The subpoenas look for every debit card, every Diet Coke that a teenager purchased using a credit card from Capital One" if they are related to Trump, he said.

Deutsche Bank has long been a principal lender for Trump's real estate business, and a 2017 disclosure form showed that Trump had at least $130 million of liabilities to the bank.

The Deutsche Bank subpoena issued by the House Financial Services Committee and the Intelligence Committee seeks records of accounts, transactions and investments linked to the Trumps, immediate family members and several Trump Organization entities, plus records of possible ties to foreign entities.

The Capital One subpoena issued by the Financial Services Committee seeks records related to the Trump Organization's hotel business.

Douglas Letter, a lawyer for the committees, told the court that Congress needed the information to craft new legislation aimed at curbing money laundering and foreign meddling in U.S. affairs.

Both sides said during Friday's hearing that they might be willing to negotiate about the scope of the subpoena, and that they had made such offers before. Letter said he believed Trump's offer to negotiate was "insincere," which Strawbridge denied.

At the end of the argument, whether they Circuit Judge Jon Newman asked lawyers for Deutsche Bank and Capital One have Trump's tax returns or those of his children.

Raphael Prober, Deutsche Bank's lawyer, said he could not answer the question in open court because of the bank's "contractual obligations."

Both lawyers said they would submit letters to the court responding to the question within 48 hours.