By John Geddie SINGAPORE (Reuters) - U.S. Vice President Mike Pence said on Thursday President Donald Trump plans to meet North Korean leader Kim Jong Un in 2019 and will push for a concrete plan outlining Pyongyang's moves to end its arms programs. The United States and North Korea have been discussing a second meeting of their leaders after a June summit in Singapore to lay the groundwork for ending a nuclear standoff between the old foes. 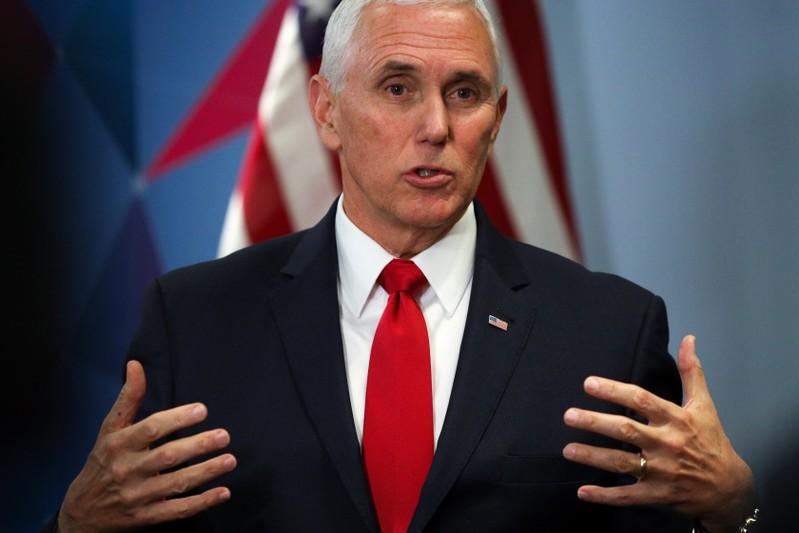 The United States and North Korea have been discussing a second meeting of their leaders after a June summit in Singapore to lay the groundwork for ending a nuclear standoff between the old foes.

"The plans are ongoing. We believe that the summit will likely occur after the first of the year, but the when and the where of that is still being worked out," Pence told reporters after meeting South Korean President Moon Jae-in on the sidelines of an Asia-Pacific summit in Singapore.

In a separate interview with NBC News, Pence said the United States would not require Pyongyang to provide a complete list of nuclear weapons and locations before the second summit but that the meeting must produce a concrete plan.

"I think it will be absolutely imperative in this next summit that we come away with a plan for identifying all of the weapons in question, identifying all the development sites, allowing for inspections of the sites and the plan for dismantling nuclear weapons," Pence said.

In prepared remarks for the plenary session of the East Asia Summit, Pence said it was essential that international sanctions pressure be maintained on North Korea until its complete denuclearisation was achieved.

"Chairman Kim agreed to this and we must hold North Korea accountable," he said.

North Korea had been angered by Washington's refusal to ease sanctions and has warned it could resume development of its nuclear program if the United States did not drop its campaign.

A U.S. think tank said on Monday it had identified at least 13 of an estimated 20 active, undeclared missile bases inside North Korea, underscoring the challenge for American negotiators hoping to persuade Kim to give up his weapons programs.

North Korea had entered into agreements with regional powers in 1994 and in 2005 to dismantle its nuclear program in return for economic benefits and diplomatic rewards, but those deals broke down after Pyongyang clandestinely continued to pursue building weapons of mass destruction.

With scant sign of progress on negotiations since the June summit and recent high-level meetings cancelled, Trump said last week he was now in "no rush" but still wanted to meet with Kim for a second time.

U.S. officials argue that sanctions forced North Korea to the negotiating table but North Korea has credited its nuclear and missile breakthroughs for providing it the standing to meet the world's biggest powers.

Pence told reporters that Moon agreed to work closely with the United States towards the second U.S.-North Korea summit, as Washington maintains its "maximum pressure" against Pyongyang.

Asked if China, which has been the North's main economic benefactor, was doing enough to maintain sanctions pressure, Pence said Beijing has done more than they have ever done before and Trump was grateful for that.

A U.S. congressional commission said on Wednesday China appeared to have relaxed enforcement of sanctions on North Korea as Pyongyang began to engage with the United States this year.

Trump is expected to speak more about enforcing sanctions when he meets Chinese President Xi Jinping at the G20 summit in Argentina late this month and the unique role that China can play in ensuring the denuclearisation of the Korean peninsula, Pence said.

North Korea has not tested a nuclear device or ballistic missile since last year, and has said it has shuttered its main nuclear test site, with plans to dismantle several more facilities.

In Washington, South Korea's Unification Minister Cho Myoung-gyon told the Wilson Center think tank it was important to provide North Korea with motivation to denuclearise, but added, "until we see actual progress on denuclearisation, sanctions will be maintained."

Cho, who is expected to meet U.S. Secretary of State Mike Pompeo on Friday, said it was important to have patience and to continue dialogue.

He said it was still possible that North Korea's Kim could make a first ever visit to Seoul this year, for what would be a fourth summit with Moon, and such a meeting could help facilitate a second U.S.-North Korea summit.

Cho reiterated Seoul's support for a declaration to end the 1950-53 Korea War, saying this would help Kim convince hardliners it was safe to denuclearize. Moon has been keen to agree such a declaration by the year-end, but Washington has linked it to progress on denuclearisation.