Trump to Biden transition could be rockier than most, some experts worry

By Andrea Shalal and Matt Spetalnick WASHINGTON (Reuters) - U.S. law maps out clear instructions for an orderly transfer of power from one president to the next, but Joe Biden's path is expected to be rockier than most of his modern-day predecessors. A drawn-out legal fight by President Donald Trump that triggers recounts of ballots in several U.S. 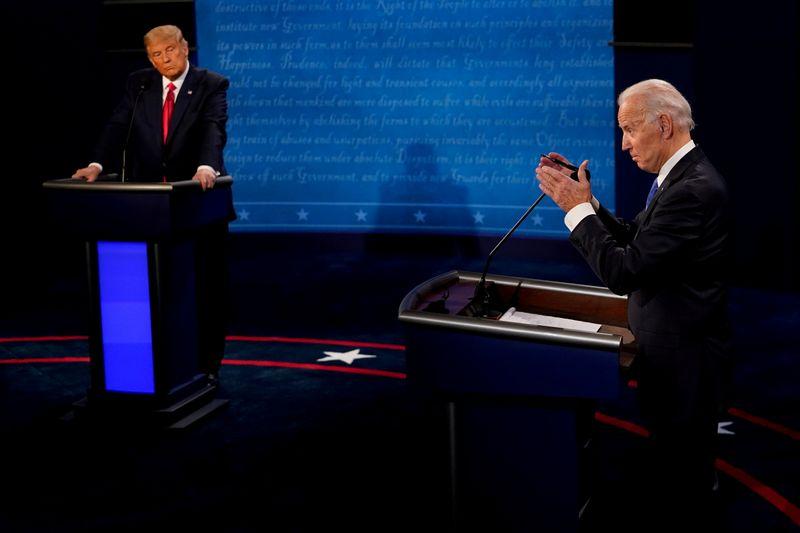 By Andrea Shalal and Matt Spetalnick

WASHINGTON (Reuters) - U.S. law maps out clear instructions for an orderly transfer of power from one president to the next, but Joe Biden's path is expected to be rockier than most of his modern-day predecessors.

A drawn-out legal fight by President Donald Trump that triggers recounts of ballots in several U.S. states could hold up many transition-related activities, as happened in 2000, when George W. Bush wasn't declared the victor until five weeks after the election.

"A long legal battle would delay the transition, and that could be dangerous on the foreign policy front," said one Republican congressional source. "The world isn't standing still while we're all focused on the election."

With Democrat Biden having secured enough electoral votes to claim the presidency, there is concern that norm-breaker Trump could limit cooperation and make the typically staid process a messy affair. On Saturday after major television networks called the election for Biden, Trump accused his rival of "rushing to falsely pose as the winner" but he did not provide evidence of anything inappropriate.

Foreign diplomats and other observers are girding for possible abrupt policy moves by the Republican president between now and Jan. 20 inauguration day - from trade decisions to troop withdrawals to presidential pardons - that could undercut the incoming administration when it will need to grapple quickly with the coronavirus pandemic and the concurrent economic crisis.

"We worry about the unpredictable," said a government official of a U.S. ally based in an embassy in Washington. "This kind of infighting is bad for America’s credibility in the world."

The Presidential Transition Act, first passed in 1964 and amended many times since then, gives career civil servants significant power over the process of transferring data and expertise to incoming officials, an arrangement meant to limit the risk of politicization.

Biden's aides will watch closely for any sign of Trump or his loyalists taking action on domestic or foreign policy meant to sabotage the new Democratic president once he assumes office, according to a person close to Biden’s camp. There had been no sign so far of any drastic moves planned.

It is also unclear whether Trump, who so far has refused to concede defeat, will abide by historic protocol and meet personally with his successor, as President Barack Obama did with Trump shortly after the 2016 election.

The Biden transition team's website - buildbackbetter.com - went live on Wednesday and even after declarations of his victory on Saturday there was just a single page visible and no explanation of plans.

Jordan Strauss, a former White House official and now managing director of business intelligence at Kroll, a division of Duff & Phelps financial consultancy, said some 200 Biden people had been working to craft plans and policies for the new administration for months.

They are deploying hundreds of representatives across dozens of agencies in coming weeks to lay the groundwork for Biden to replace more than 4,000 Trump political appointees, the nucleus of a federal bureaucracy that controls an annual budget of more than $4.5 trillion.

White House officials say they are abiding by statutory requirements but declined to provide details.

Since Trump took office in January 2017 he has openly attacked civil servants and Democrats and it remains to be seen whether his outgoing administration maintains that tone.

Incumbent officials have leeway over how cooperative and helpful they want to be, people involved in previous transitions said.

In 2016, then-President Obama directed his staff to "be professional" and cooperate closely with Trump's team. But turnover on Trump's transition staff and a reluctance to take any materials prepared by Obama's aides seriously marred the effort, multiple sources involved in the process said.

Despite that, political scientist Martha Joynt Kumar, author of a 2015 book on White House transitions, was upbeat about the resilience of the process this time. Trump officials so far had adhered to rules such as facilitating security clearances for Biden representatives, Kumar said.

Chris Liddell, White House deputy chief of staff, and others involved in the transition, take their reputations seriously, she said, and a peaceful transfer of power remains a central tenet of the U.S. political system."To what extent are people going to want to participate at the end of the administration in blowing up relationships and institutions?" Kumar asked.

Biden's team is headed by Ted Kaufman, a longtime adviser appointed to fill out his term in the Senate after he was elected as Obama's vice president in 2008.

The legal framework, however, can't avert potential acrimony between the transition teams or prevent Trump from issuing executive orders and administrative rules that Biden might oppose.

Kate Shaw and Michael Herz, law professors at Yeshiva University in New York, said the participation of career officials should limit the damage, but the handoff of intelligence and security data remains a concern since those briefings are overseen by the director of national intelligence, John Ratcliffe, a Trump loyalist.

Shaw and Herz wrote in an essay in The Atlantic: "Plenty of things could still go wrong before noon on January 20."