Trump suggests FBI may have infiltrated his campaign

By John Walcott WASHINGTON (Reuters) - U.S. President Donald Trump on Friday escalated his attacks on the Justice Department, suggesting that the FBI may have planted or recruited an informant in his 2016 presidential campaign. Trump stopped short of accusing the FBI of spying on his campaign, instead citing unnamed reports that at least one FBI representative was 'implanted' for political purposes into his campaign. 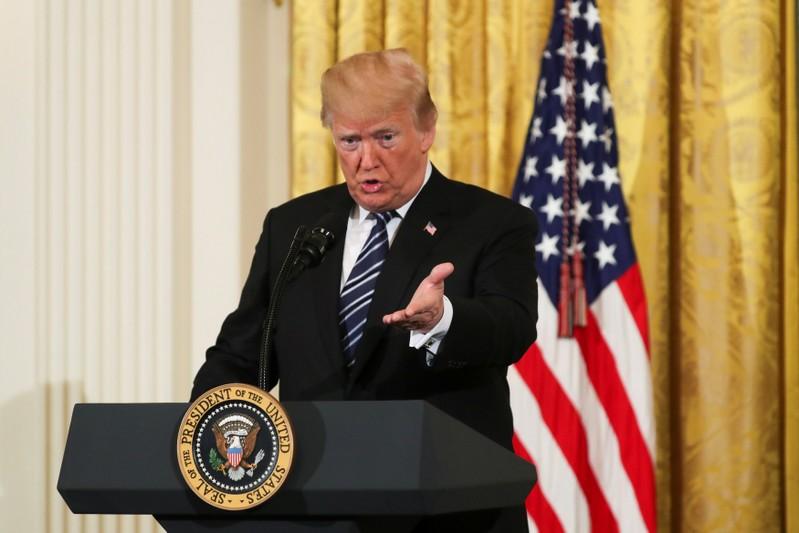 WASHINGTON (Reuters) - U.S. President Donald Trump on Friday escalated his attacks on the Justice Department, suggesting that the FBI may have planted or recruited an informant in his 2016 presidential campaign.

Trump stopped short of accusing the FBI of spying on his campaign, instead citing unnamed reports that at least one FBI representative was "implanted" for political purposes into his campaign.

"If true - all time biggest political scandal!" Trump said in a tweet.

Former New York Mayor Rudolph Giuliani, now one of Trump's personal attorneys, almost immediately undercut Trump's speculation about an informant. "I don't know for sure, nor does the president, if there really was one," he told CNN.

"For a long time we've been told there was some kind of infiltration," Giuliani said. "At one time, the president thought it was a wiretap."

Neither Trump nor Giuliani provided any evidence of government infiltration into Trump's presidential campaign.

With Special Counsel Robert Mueller investigating possible collusion between Trump's election campaign team and Russia, Trump and some of his allies have alleged that elements inside the Justice Department are seeking to undermine his administration.

Trump has denied any collusion with Russia and repeatedly called Mueller's investigation a "witch hunt." Russia has denied meddling in the U.S. presidential election.

Glenn Simpson, who heads a consulting firm in Washington and hired former British spy Christopher Steele to investigate Trump's dealings with Russia prior to the campaign, testified last August to the Senate Judiciary Committee that some of what he collected was "human source intelligence."

Simpson, however, did not tell the committee anything that could substantiate suggestions that U.S. authorities might have inserted an informant into the Trump campaign.

CNN reported that U.S. officials said, "The confidential intelligence source was not planted inside the campaign to provide information to investigators."

Nevertheless, some Republicans are demanding classified documents related to the alleged informant. The Justice Department has refused to provide them.

"It would be at best irresponsible, and at worst potentially illegal, for members of Congress to use their positions to learn the identity of an FBI source for the purpose of undermining the ongoing investigation into Russian interference in our election," Warner said in a statement.

FBI Director Christopher Wray, a Trump appointee, on Wednesday cited the need to protect people who cooperate with law enforcement or intelligence officials.Trump's allies also charge that Mueller has exceeded the bounds of his authority by investigating the financial dealings of former Trump campaign manager Paul Manafort.

Mueller so far remains undeterred by attempts to discredit the investigation or distract attention from it, according to one source familiar with the probe.

His office has negotiated a plea agreement with Manafort's former son-in-law, Jeffrey Yohai, that requires him to cooperate with other probes, Reuters reported on Thursday.