Trump slams Biden in his birthplace ahead of Democratic nomination speech 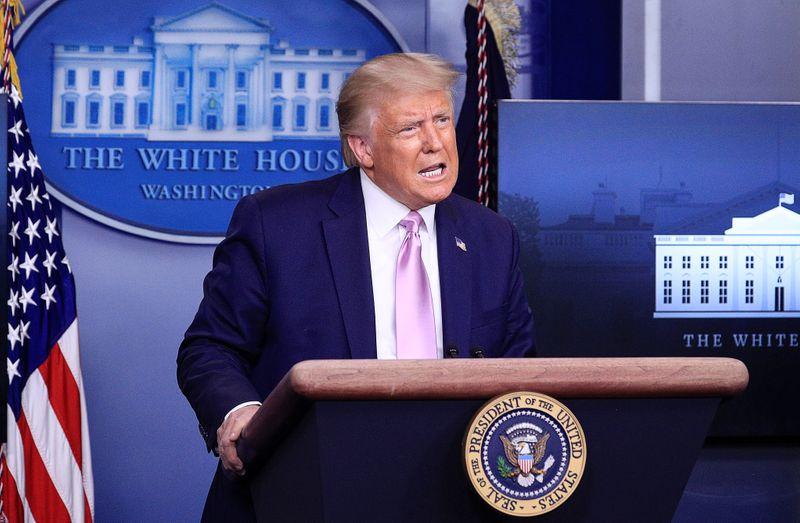 Trump's speech, which sought to highlight a "half century of Joe Biden failing America," also aimed to shore up the Republican president's support in the state, which may prove key to winning re-election in November.

"He abandoned Pennsylvania. He abandoned Scranton," Trump told hundreds of supporters gathered outside a kitchen remodeling company in Old Forge on the outskirts of Scranton, where Biden was born.

"But he spent the last half-century in Washington, selling out our country and ripping off our jobs and letting other countries steal our jobs. Mexico, China, all of them."

Trump won the rust belt state of Pennsylvania by just 45,000 votes in 2016, promising to bring blue collar jobs back to the economically depressed region. But he is trailing Biden in recent polls there by about six percentage points, according to Real Clear Politics.

Biden, who moved to Delaware when he was young, will accept the presidential nomination on Thursday night, closing out a four-day virtual Democratic National Convention where speakers have argued that he can unite the country after four years of Trump’s divisive leadership.

Biden typically beats Trump in national polls on who could better handle the coronavirus pandemic, which has killed more than 170,000 Americans. Trump routinely bests him on managing the economy, however.

Describing Biden as "no friend of Pennsylvania," Trump doubled down on policies supported by Biden that he claimed hurt the people of Pennsylvania, highlighting his own successes reversing them.

"Biden supported every single bogus attack on Pennsylvania workers," Trump said. He cited the North America Free Trade Agreement, which Trump revamped as well as China's entry into the World Trade Organization, which supercharged its economic rise, and the "ridiculous" Paris climate accord, which the Trump administration abandoned.

He also accused Biden of seeking to "outlaw" American oil, coal and natural gas and to open U.S. borders during a pandemic.

The Biden campaign did not immediately respond to a request for comment. But politics Professor Terry Madonna at Franklin and Marshall College in Lancaster, Pennsylvania, said Trump risked alienating Scranton voters by being too hard on their native son and would be better served by sticking to the issues.

The Pennsylvania speech caps a week of appearances in the Midwest and Southwest by Trump to counter the convention, which has included speeches from some prominent disaffected Republicans, ahead of the Republican National Convention next week.

On Thursday, Trump sought to play up fears that Biden, a moderate, would be swayed by more extreme members of his party.

"Joe Biden is a puppet of the radical left movement that seeks to destroy the American way of life," he said.