By Steve Holland and Jeff Mason UNITED NATIONS (Reuters) - U.S. President Donald Trump on Tuesday denounced Iran's 'bloodlust' and called on other nations to join the United States to apply pressure on Iran after attacks on Saudi oil facilities, but said there is a path to peace 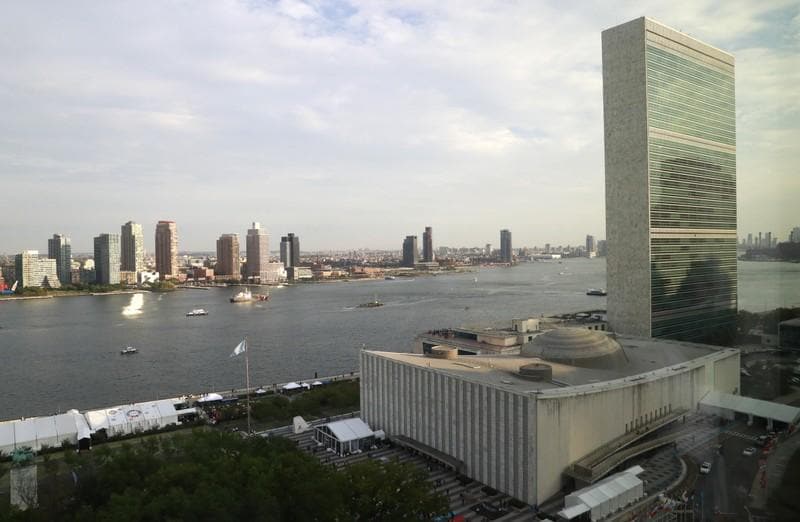 UNITED NATIONS (Reuters) - U.S. President Donald Trump on Tuesday denounced Iran's "bloodlust" and called on other nations to join the United States to apply pressure on Iran after attacks on Saudi oil facilities, but said there is a path to peace.

"America knows that while anyone can make war, only the most courageous can choose peace," Trump said in an address to the United Nations General Assembly annual gathering of world leaders.

In his third U.N. appearance, Trump offered a more subdued tone compared to the bombast of his previous speeches in 2017 and 2018, looking to convey a more reassuring presence as he asks Americans for a second four-year term next year despite a fresh push for his impeachment among some Democrats.

While offering his habitual defence of national sovereignty - "the future must never belong to globalists" - Trump tempered his language, stressing the U.S. desire for peaceful relations with all and calling for collective, rather than unilateral, action.

The response to Trump in the chamber was relatively muted, a year after the crowd laughed when he boasted about his achievements and gasped in 2017 when he threatened to wipe out North Korea.

The Sept. 14 attacks in Saudi Arabia, widely blamed on Iran, have rattled the Middle East and raised concerns about a broader war. Iran denies involvement. Trump has shown restraint in the crisis, holding back from military retaliation despite pressure from hawkish allies, at least for now.

But he promised to keep trying to squeeze Iran's economy with sanctions until Tehran agrees to give up what Washington says is a pursuit of nuclear weapons. Iran has said its nuclear programme has always been for peaceful purposes only.

"All nations have a duty to act. No responsible government should subsidize Iran's bloodlust. As long as Iran's menacing behaviour continues, sanctions will not be lifted, they will be tightened," Trump said.

Fox News Channel aired a clip of an interview with Rouhani in which he replied to a question about Trump's "bloodlust" comment.

The United States was carrying out air strikes in Syria, he said. "And today America unfortunately is a supporter of terrorism in our region. And wherever America has gone, terrorism has expanded in their wake," Rouhani said.

Trump had a stern message for China and its president, Xi Jinping, with whom he is locked in a trade war that is damaging both country's economies. He said the world is watching how Beijing handles mass demonstrations in Hong Kong that have heightened fears of a potential Chinese crackdown.

"How China chooses to handle the situation will say a great deal about its role in the world in the future. We are all counting on President Xi as a great leader," he said.

Trump has sought to pressure China to agree to reduce trade barriers through a policy of increasing tariffs on Chinese products. He accused China of the theft of trade secrets "on a grand scale" and said it was taking advantage of World Trade Organization rules that give Beijing beneficial treatment as a "developing economy."

"Hopefully we can reach an agreement that will be beneficial to both countries. But as I have made clear I will not accept a bad deal for the American people," Trump said.

Trump was tough on Iran and its leadership, with Iranian President Hassan Rouhani in New York for U.N. activities amid speculation about whether they might meet to discuss their differences.

An Iranian diplomat sat in Iran's second-row seat for Trump's speech. Rouhani was at his New York hotel, not in the U.N. chamber.

In remarks to media on Tuesday Rouhani said he was open to discuss small changes, additions or amendments to a 2015 nuclear deal between Iran and six major powers if the United States lifted sanctions imposed on the Islamic republic.

French President Emmanuel Macron, trying to create conditions for talks between the United States and Iran, said he hoped there could be progress on Iran on Tuesday after he held talks with Rouhani on Monday.

"The attacks on Saudi Arabia have changed the situation. Today the risk is (that things) flare up because of a miscalculation or a disproportionate response," Macron said in a speech at the General Assembly.

German Chancellor Angela Merkel met Rouhani on Tuesday and said she told him she would welcome U.S. talks with Iran but that it was unrealistic for Tehran to think sanctions would be lifted before talks take place.

Over the past week, Trump has tightened economic sanctions on Iran and ordered more U.S. troops to Saudi Arabia and the United Arab Emirates in a show of support for those U.S. allies in the tense region.

"America is ready to embrace friendship to all who genuinely seek peace and respect," Trump said. "The United States has never believed in permanent enemies. We want partners, not adversaries."