By Ginger Gibson WASHINGTON (Reuters) - President Donald Trump on Tuesday ruled out the idea of expanding the nine-member U.S. 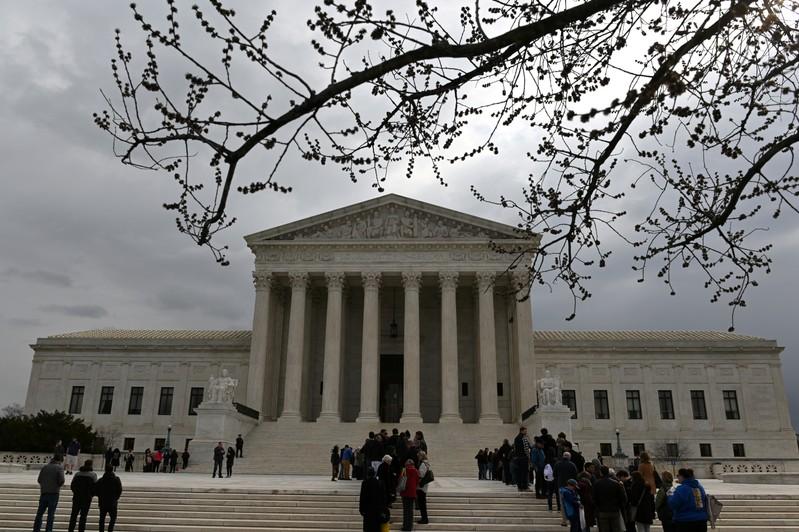 WASHINGTON (Reuters) - President Donald Trump on Tuesday ruled out the idea of expanding the nine-member U.S. Supreme Court, using a question about "court packing" to criticise Democrats in a preview of a likely attack line for the 2020 election.

Trump said he "wouldn't entertain that," when asked about expanding the size of the court at a news conference.

"The only reason they're doing that is they want to try to catch up, so if they can't catch up through the ballot box by winning an election they want to try doing it in a different way," the Republican president added, referring to Democrats.

Trump has appointed conservative Justices Brett Kavanaugh and Neil Gorsuch to the court since taking office in 2017, cementing its 5-4 conservative majority. Supreme Court justices are appointed for lifetime terms, and both his appointees potentially could serve for decades.

In response to Trump's appointments, a handful of liberal activists have argued that if Democrats win the White House in the November 2020 presidential election, they should expand the number of Supreme Court justices to tip the balance of control towards liberals.

When asked, some candidates seeking the 2020 Democratic presidential nomination have said they would consider adding more justices to the court or other reforms. However, they have not made it a central part of their policy proposals, and other Democrats have opposed such an idea. Long-shot liberal candidate Pete Buttigieg has mentioned a Supreme Court composed of 15 justices that implements other reforms to ensure partisan parity.

Trump's pledge to place conservative justices on the court was a key campaign promise. Republicans have found that talking about the court galvanizes their conservative political case, given the court's influence over contentious issues including abortion, gay rights and immigration policy. The composition of the Supreme Court also is a major issue for liberals.

When Trump was elected in 2016, there was a court vacancy because of the death of conservative Justice Antonin Scalia and the Republican-led Senate's refusal to consider Democratic President Barack Obama's nominee Merrick Garland.

Some Democrats have accused Republicans of "stealing" a seat, pointing to Senate Majority Leader Mitch McConnell's move to block consideration of Garland and keep the position vacant until the following year so the next president could make the appointment. McConnell's action, with little precedent in U.S. history, enabled Trump to nominate Gorsuch in 2017, with the Republican-led Senate voting to confirm him.

Expanding the court - by either party - would be difficult.

Democratic President Franklin Roosevelt in 1937 proposed expanding it to as many as 15 justices. Critics accused him of a "court-packing" scheme aimed at changing its ideological composition. The proposal went nowhere in Congress.

(Reporting by Roberta Rampton; Writing by David Alexander; Editing by Cynthia Osterman and Will Dunham)