By Doina Chiacu and Richard Cowan WASHINGTON (Reuters) - U.S. President Donald Trump on Friday sought to cast doubt on the woman who has accused his Supreme Court nominee Brett Kavanaugh of sexual assault, saying if the attack was 'as bad as she says' it would have been immediately reported to police 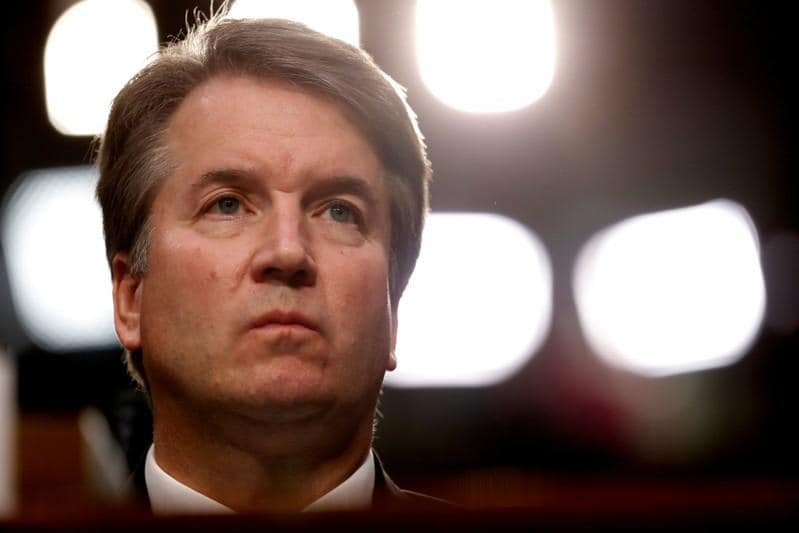 By Doina Chiacu and Richard Cowan

WASHINGTON (Reuters) - U.S. President Donald Trump on Friday sought to cast doubt on the woman who has accused his Supreme Court nominee Brett Kavanaugh of sexual assault, saying if the attack was "as bad as she says" it would have been immediately reported to police.

After days of restrained comments on the allegations by California professor Christine Blasey Ford, Trump took to Twitter to question her account of what happened between her and Kavanaugh at a party in 1982 when they were in high school.

The tweets came as a Republican-controlled U.S. Senate committee struggled on how to proceed with Kavanaugh's nomination. Democrats have demanded more time for scrutiny and Republicans want to move ahead quickly with a confirmation vote in an increasingly volatile political climate ahead of the Nov. 6 congressional elections.

The Senate Judiciary Committee had delayed a vote on Kavanaugh's confirmation after Ford's allegations emerged last week, and her lawyers and committee staff are negotiating how and when she will testify. Republicans have given Ford's lawyers until the end of Friday to work out the terms, Politico reported, citing an unnamed Republican senator.

Senate Republicans proposed moving the hearing from Monday to Wednesday, a day earlier than Ford requested, Politico reported. It said Ford would testify first, then Kavanaugh.

Approval of Kavanaugh would cement conservative control of the Supreme Court and advance a White House effort to tilt the American judiciary farther right.

Trump and the White House had been careful not to malign Ford after her allegations surfaced, but Trump dropped the restraint in his tweets on Friday.

"I have no doubt that, if the attack on Dr. Ford was as bad as she says, charges would have been immediately filed with local Law Enforcement Authorities by either her or her loving parents," Trump said. "I ask that she bring those filings forward so that we can learn date, time, and place!

"Judge Brett Kavanaugh is a fine man, with an impeccable reputation, who is under assault by radical left wing politicians who don’t want to know the answers, they just want to destroy and delay," Trump wrote.

Republican Senator Susan Collins, potentially a key vote on Kavanaugh's nomination, said at an event in Portland, Maine, that she was "appalled" by Trump's tweet.

"We know allegations of sexual assault are one of the most unreported crimes that exist," Collins said, according to the Portland Press Herald. "So I thought that the president’s tweet was completely inappropriate and wrong."

If the hearing proceeds, Republicans will be forced to walk a careful line in questioning Ford's account without alienating women voters ahead of the elections. Before the 2016 presidential election, more than a dozen women accused Trump of making unwanted advances.

"The most powerful man in the world just used his position and platform to attack a sexual assault survivor," she said on Twitter. "This is the same man who has been credibly accused of more than a dozen cases of sexual assault or harassment."

Senate Majority Leader Mitch McConnell, speaking at a gathering of evangelical voters in Washington, assured Kavanaugh would be confirmed.

"You watched the fight, you watched the tactics, but here is what I want to tell you - in the very near future, Judge Kavanaugh will be on the United States Supreme Court," McConnell told the Value Voters Summit, prompting a standing ovation.

"We're going to plow through all of this and do our job."

McConnell's goal has been to confirm Kavanaugh by Oct. 1, the start of the Supreme Court term.

Trump's Friday tweets contrasted to comments earlier in the week when he said Ford should be heard, even if it meant a delay in the confirmation process. At a rally in Las Vegas on Thursday night he had told supporters, "We'll let it play out, and I think everything is going to be just fine."

Ford has said Kavanaugh sexually assaulted her in 1982 when both were high school students in Maryland. Kavanaugh has denied the allegation and pledged to testify at Monday's hearing.

Ford's lawyers and committee staff spoke by phone on Thursday night, a panel spokesman said without giving details. A person familiar with the call said Ford could testify by next Thursday.

The telephone discussion ended with no decision, according to media reports. The reports also said Ford's lawyers wanted Kavanaugh to appear separately first and that she wanted to be questioned by senators, not outside counsel.

Ford's legal team has said she strongly prefers that her allegations are fully investigated before she testifies.

White House adviser Kellyanne Conway, who has urged that Ford to be heard, said on CNN on Friday that Ford's requests were a "laundry list of demands."

Ford's team has sought guarantees of her safety because of death threats. Kavanaugh and his wife also had received threats, a senior White House official said.