By Steve Holland WASHINGTON (Reuters) - President Donald Trump is planning to visit four election battleground states next week as the Republican competes for attention with Democrats who will formally nominate Joe Biden as their presidential candidate. A source familiar with the planning said Trump plans stops in Minnesota, Wisconsin, Arizona and Pennsylvania, all of them states that may prove crucial to determining the winner of the Nov. 3 election 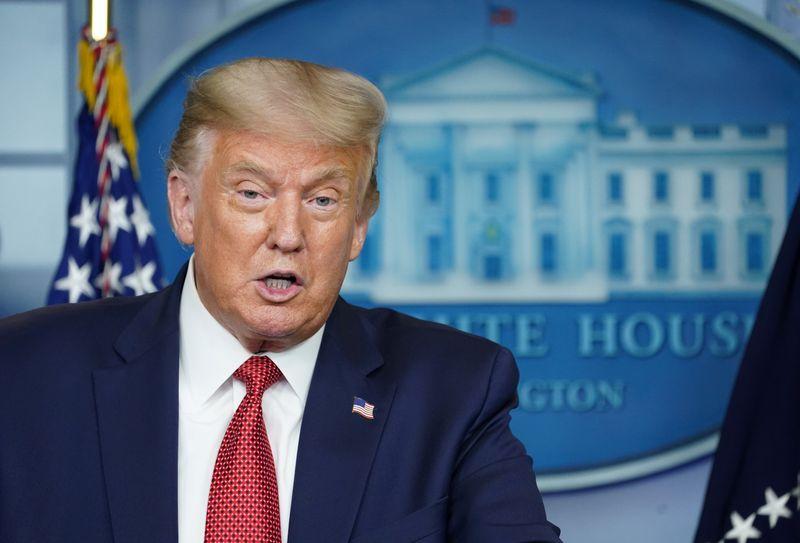 WASHINGTON (Reuters) - President Donald Trump is planning to visit four election battleground states next week as the Republican competes for attention with Democrats who will formally nominate Joe Biden as their presidential candidate.

A source familiar with the planning said Trump plans stops in Minnesota, Wisconsin, Arizona and Pennsylvania, all of them states that may prove crucial to determining the winner of the Nov. 3 election.

Democrats are holding their mostly virtual convention in Milwaukee, Wisconsin, next week. The Milwaukee Sentinel Journal said the Trump campaign was considering holding an event in Oshkosh, Wisconsin.

Trump, struggling to deal with the coronavirus pandemic and economic recession, has been looking for ways to blunt the momentum of Biden after the Democrat chose California Senator Kamala Harris as his vice presidential running mate.

The incumbent president, seeking a second four-year term, trails Biden in many opinion polls both nationally and in many swing states, although Trump insists he is making up ground.

Trump's travel next week is likely to be a mix of official White House and campaign-related events. He is planning a stop in Biden's home town of Scranton, Pennsylvania, the source said.

The Trump campaign declined to comment on next week's travel.

Typically a candidate from one party will sit out most of the week in which the opposing party holds its nominating convention since most of voters' attention will be focused on the convention.

But Trump has shown himself to be no adherent to political tradition and with his campaign appearances reduced by the pandemic, he is under pressure to get out more and make the case for why he should be re-elected.