Trump not joking about foreign help in elections - Hicks 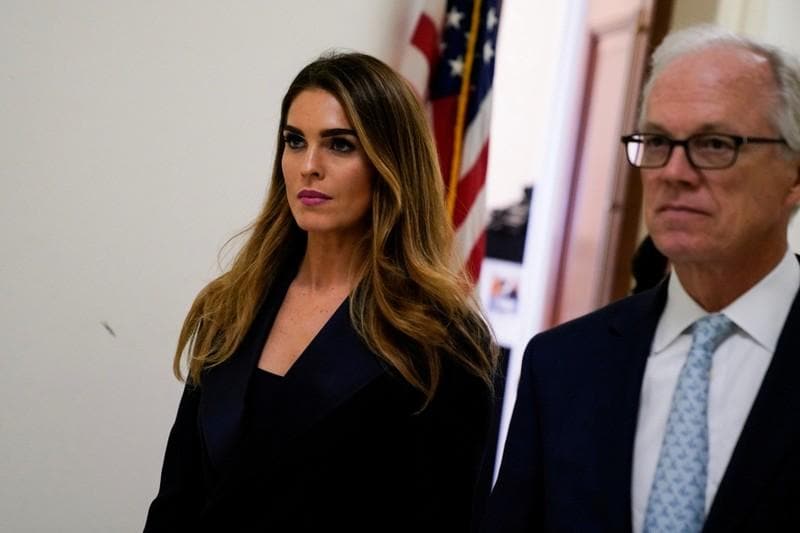 The 273-page transcript, released by Democrats who lead the U.S. House Judiciary Committee, chronicles eight hours of closed-door testimony that Hick provided the panel on Wednesday as part of a congressional probe of possible obstruction of justice and other misconduct by Trump.

Hicks, who was Trump's campaign press secretary, declined to answer questions about her 14-month tenure at the White House after the administration asserted that she had immunity from testifying on the topic. Democrats say the transcript cites 155 instances in which lawyers from the White House and Justice Department blocked her from answering.

But Hicks did answer questions about the campaign, including hush payments to two women who claimed to have affairs with Trump, and about events that have occurred since she departed the White House in March 2018.

Lawmakers asked the 30-year-old public relations consultant and former fashion model about comments Trump made in a recent ABC News interview, in which the president said he saw nothing wrong with reviewing damaging information about political opponents from a foreign government.

"I don't think that was a joke, based on what I saw," Hicks told the committee, adding that she would not accept such information from a foreign source today and would report any such offer to federal authorities.

Former Special Counsel Robert Mueller's 448-page report on Russian meddling in the 2016 presidential campaign found insufficient evidence to establish that the Trump campaign engaged in a criminal conspiracy with Moscow, despite numerous contacts between the campaign and Russia.

Representative Doug Collins, the panel's top Republican, said the transcript contained no new information and called on Democrats to subpoena Mueller to testify.

Earlier on Thursday, an expert witness told the committee at a public hearing that Trump's remarks to ABC could violate the presidential oath of office and provide evidence for any future impeachment inquiry.

"Receiving foreign assistance has been recognized throughout the entire history of the country as something that is counter to and undermines the Constitution," said Carrie Cordero, a conservative attorney who is a senior fellow at the Center for a New American Security think tank.

"That is an invitation ... to Russian intelligence and any other intelligence service that's out there that wants to try to find a way to influence our democratic processes," she added.

Cordero also pointed to the Trump campaign's use of hacked emails from Trump's Democratic rival Hillary Clinton and the Democratic National Committee that were released by Wikileaks as fertile ground for inquiry.

But Hicks told lawmakers she saw nothing wrong with using the Wikileaks material against Trump's Democratic rival Hillary Clinton, saying the Trump campaign was "taking publicly available information to draw a contrast between the candidates."

Asked if the Trump campaign was "happy" to get the Wikileaks emails damaging to Clinton, Hicks said: "I don't think that's a fair characterization. I think "relief that we weren't the only campaign with issues" is more accurate."