By David Lawder WASHINGTON (Reuters) - U.S. President Donald Trump said on Wednesday that the World Bank Group should be led by U.S. Treasury official David Malpass, a Trump loyalist and critic of multilateral institutions who has vowed to pursue 'pro-growth' reforms at the development lender 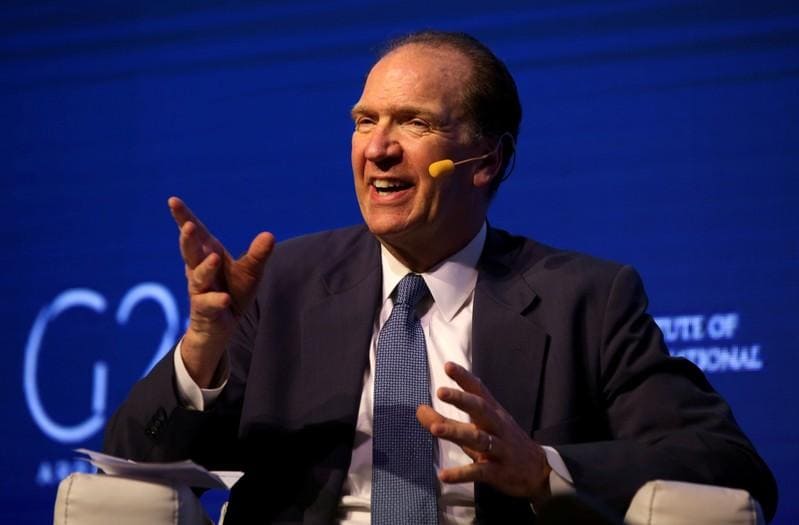 WASHINGTON (Reuters) - U.S. President Donald Trump said on Wednesday that the World Bank Group should be led by U.S. Treasury official David Malpass, a Trump loyalist and critic of multilateral institutions who has vowed to pursue "pro-growth" reforms at the development lender.

Trump's nomination of Malpass, the Treasury Department's top diplomat, is subject to a vote by the World Bank's executive board and could draw challengers from some of its 188 other shareholding countries.

The United States is the largest shareholder with 16 percent of its voting power and has traditionally chosen the bank's president, but Jim Yong Kim, who stepped down from the job on Feb. 1, faced challengers from Colombia and Nigeria in 2012.

The nomination of Malpass signals that the Trump administration wants a firmer grip on the World Bank. He was an economic adviser to Trump's 2016 election campaign.

Malpass, Treasury undersecretary for international affairs, a job in which he oversees the U.S. role in the World Bank and the International Monetary Fund, has criticized them for growing ever larger, more "intrusive" and "entrenched."

He also has pushed the bank to cut back lending to China, which he argues is too wealthy for such aid when it is saddling poorer countries with debt in its Belt and Road infrastructure drive.

Last year, as part of a $13 billion World Bank capital increase, Malpass helped negotiate reforms aimed at refocusing resources towards the poorest countries and winding down lending to China.

"He has fought to ensure financing is focussed on the places and projects that truly need assistance, including people living in extreme poverty," Trump said in announcing his choice at the White House with Malpass by his side.

Malpass said at the White House he would work to implement these reforms and also focus on women's economic empowerment.

"I'm very optimistic that we can achieve breakthroughs to create growth abroad that will help us combat extreme poverty and create economic opportunities in the developing world," Malpass said.

Malpass will continue to participate in U.S.-China trade negotiations as he campaigns for the World Bank presidency. He will join a delegation heading to Beijing for more talks next week, a senior Trump administration official said.

But as Trump's "America First" trade agenda and tariff war with China puts strains on many developing economies, some development experts say that Malpass' candidacy will be a difficult sell.

"David Malpass will have a lot of work to do to convince other shareholders that he is prepared to move beyond his past statements and track record when it comes to the World Bank’s agenda," said Scott Morris, a former U.S. Treasury development finance official who is now a senior fellow at the Center for Global Development in Washington.

Morris said that includes the global lender's role in climate finance and "the need for constructive engagement with China."

By naming Malpass a day before the World Bank board begins a month-long nomination process, Trump could deter the emergence of other candidates.

Malpass would honour the bank's standards and obligations, including its initiatives to combat climate change, the senior Trump administration official said.

If approved, Malpass would replace Kim, a physician and former university president who resigned more than three years before his term ended to join private equity fund Global Infrastructure Partners. Kim had differed with the Trump administration over climate change, effectively ending the bank's financing of coal-fired power projects.

Malpass served in Treasury and State Department roles during the Ronald Reagan and George H.W. Bush administrations and at investment bank Bear Stearns where he was chief economist before its 2008 collapse.