By Dan Williams and Steve Holland WASHINGTON (Reuters) - A Washington visit by Israeli Prime Minister Benjamin Netanyahu to discuss a long-awaited Middle East peace plan lent a surprise boost on Monday to his main political rival, who secured a separate meeting with U.S. 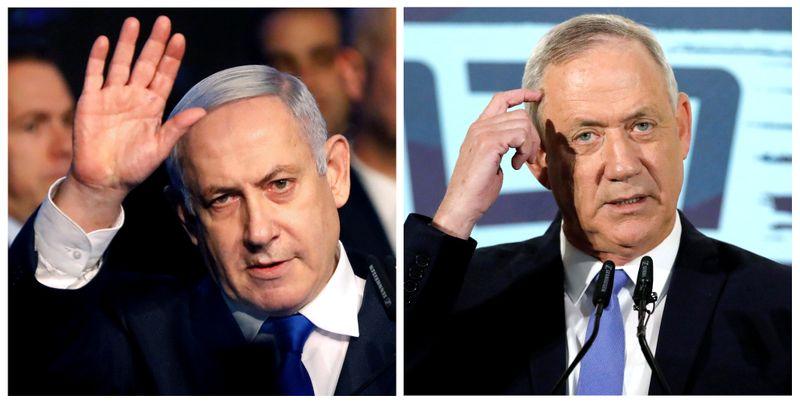 By Dan Williams and Steve Holland

Ex-general Benny Gantz deadlocked with Netanyahu in two elections last year, triggering another ballot for March. Both men were invited to the unveiling, scheduled for Tuesday, of Trump's blueprint for Israeli-Palestinian peace.

A U.S. official said Netanyahu had wanted Gantz to escort him to the White House, telegraphing to many Israelis the challenger's subordination to the four-term conservative Likud party incumbent.

Netanyahu "would have preferred to have Gantz down in the audience" as the prime minister stands alongside Trump during the peace plan's announcement on Tuesday, the official said.

Instead, Gantz came separately, meeting Trump on Monday after Netanyahu held preparatory talks with the U.S. president. Gantz planned to skip Tuesday's ceremony, returning to Israel to vote against Netanyahu's bid to win parliamentary immunity from prosecution on corruption charges. Netanyahu denies the allegations against him.

Trump seemed to have granted his right-wing ally Netanyahu the greater public relations boost. He appeared before the news cameras with the prime minister, while keeping reporters away from his session with Gantz.

Still, Gantz's centrist Blue and White party gloried in his face-time with Trump. "The president and the next prime minister. Get used to it," party No. 2 Yair Lapid tweeted as a caption to a picture of Trump shaking hands with Gantz in the Oval Office.

A White House official said Trump's meeting with Gantz was "good" and that the president enjoyed talking to him. Gantz deemed the meeting "important and exceptional" and "superb".

Trump's aides had apparently helped the president, who was previously unfamiliar with Gantz, warm to the towering Israeli challenger. Trump was told in advance that Gantz was "a war hero who is new to politics," one U.S. official said.

Trump was a political newcomer when he was elected in 2016, and the White House introduction to Gantz seemed a far cry from Netanyahu's attempts to cast his former military chief domestically as a "weak leftist" devoid of diplomatic pedigree.

But Trump, alongside Netanyahu, also spoke of the incumbent and Gantz as "two good competitors. They are fighting it out."

Yohanan Plesner, president of the non-partisan Israel Democracy Institute, said the Washington visit was a chance for Israelis to "see Netanyahu as the statesman as opposed to Netanyahu the defendant" - to Likud's electoral advantage.

But he added: "Gantz mitigated some of the potential damage by being invited for his own meeting with the president."

Lacking Netanyahu's English fluency and polish, Gantz opted for man-of-the-people optics in Washington. Arriving on a commercial flight, he eschewed the VIP exit at the airport. He went for a morning jog on the Washington Mall before donning spectacles and a suit and assuming a more diplomatic style for his White House visit.

Before leaving, Gantz delivered a televised statement in praise of Trump's peacemaking efforts - with the caveat the Blue and White would commit to the diplomatic drive after the ballot.

He included a parting shot at his political rival in Hebrew that he did not repeat in his English translation of the statement: "Netanyahu cannot manage both a country and a trial."