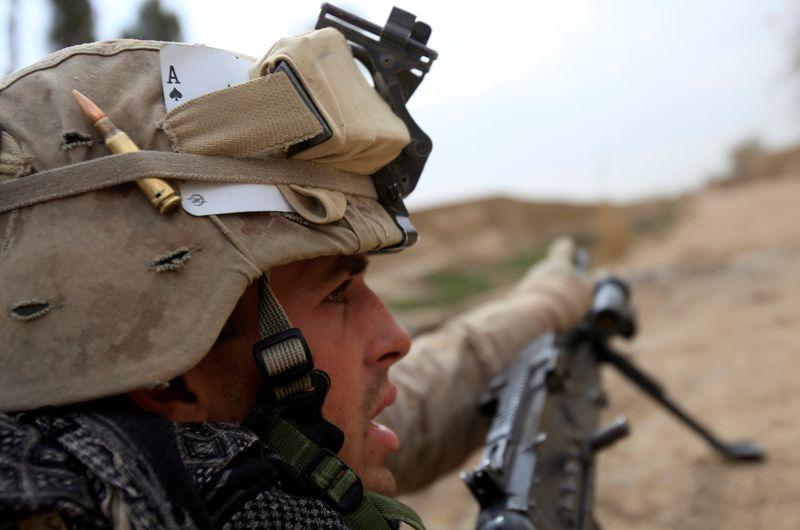 WASHINGTON (Reuters) - President Donald Trump's new Pentagon leadership team has not yet signalled an imminent, total withdrawal of U.S. troops from Afghanistan, raising expectations among allies that Trump might settle for only a partial reduction this year, sources said.

Trump fired his defense secretary, Mark Esper, and appointed other top Pentagon officials last week after longstanding concerns that his priorities were not being dealt with urgently enough at the Defense Department.

They included ending the 19-year-old Afghan engagement by Christmas, an ambitious target that opponents of the country's longest war welcomed but which Trump's critics warned could be reckless given ongoing militant violence plaguing Afghanistan.

"It was a part of many of them because it is of great importance to our NATO allies, our allies in the region and also just global security and protecting the American homeland," the official said, speaking on condition of anonymity.

But the official, speaking after the calls with allies, suggested that Trump would not push a withdrawal faster than conditions on the ground allow.

U.S. and Afghan officials are warning of troubling levels of violence by Taliban insurgents and persistent Taliban links to al Qaeda.

It was those ties that triggered U.S. military intervention in 2001 following the 9/11 attacks, which al Qaeda carried out. Thousands of American and allied troops have died in fighting in Afghanistan since then.

Some U.S. military officials, citing U.S. counter-terrorism priorities in Afghanistan, have privately urged Trump against going to zero at this point and want to keep U.S. troop levels at around 4,500 for now.

"The president has acted appropriately in this, has never said: 'Hey, we're going to zero. Let's go tomorrow.' It has always been a conditions-based effort and that effort continues," the senior U.S. defense official said, without explicitly detailing future drawdown plans.

The White House did not immediately respond to requests for comment.

'SEE FIGHT TO THE FINISH'

Over the past four years, predicting Trump's policy pronouncements has not always been easy.

But U.S. officials say he has yet to issue orders to carry that withdrawal out. Doing so now would be difficult for the U.S. military to execute, especially given the reliance of NATO allies on the United States for logistical support, they add.

One NATO official, who asked not to be named, said the belief was the United States could soon announce a drawdown to 2,500 to 3,000 troops by Christmas.

National security adviser Robert O'Brien already raised such a possibility, saying last month the United States would go down to 2,500 by early 2021, in comments overshadowed by Trump's Christmas timeline.

A NATO diplomat said Miller, in his introductory call with NATO Secretary-General Jens Stoltenberg, did not suggest a complete withdrawal but instead a reduction of troops.

The senior U.S. defense official said U.S. withdrawals from Afghanistan had been carried out in an "educated way so as not to revisit the Iraq withdrawal that failed in 2011."

Regardless of what Trump might do, Taliban militants, fighting against the U.S.-backed government in Kabul, have called on the United States to stick to a February agreement with the Trump administration to withdraw U.S. troops by May, subject to certain security guarantees.

Violence has been rising throughout Afghanistan, with the Taliban attacking provincial capitals, in some case prompting U.S. airstrikes.

In Kabul, there is growing fear of a precipitous withdrawal that could further embolden the Taliban and undercut already sputtering peace talks, sources say.Miller, in a message to the U.S. armed forces chrome-extension://oemmndcbldboiebfnladdacbdfmadadm/https://media.defense.gov/2020/Nov/14/2002535407/-1/-1/0/INITIAL-MESSAGE-TO-THE-DEPARTMENT.PDF?source=GovDelivery released over the weekend, echoed Trump's desire to end America's overseas engagements by saying "it's time to come home." But he did not offer a timetable and stressed the need to finish the fight against al Qaeda.

The Taliban harbored al Qaeda's leaders and the U.S. special envoy for Afghanistan said the Taliban had not fulfilled their February accord commitment to break ties with al Qaeda.

"We are on the verge of defeating al Qaeda and its associates, but we must avoid our past strategic error of failing to see the fight through to the finish," wrote Miller, a former Green Beret and counter-terrorism official.