By Jeff Mason and Steve Holland WASHINGTON (Reuters) - President Donald Trump, hardening his stance on China as he struggles to contain the coronavirus, said on Tuesday he signed legislation and an executive order to hold China accountable for the 'oppressive' national security law it imposed on Hong Kong. Trump, acting on a Tuesday deadline, signed a bill approved by the U.S. 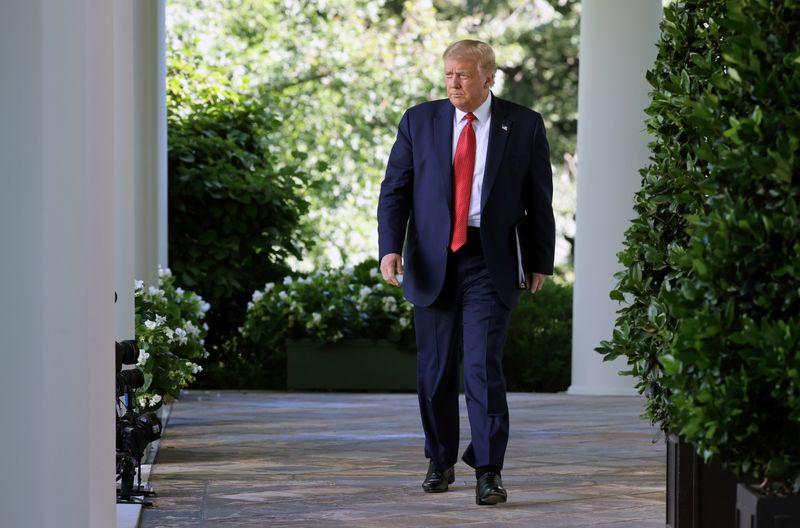 WASHINGTON (Reuters) - President Donald Trump, hardening his stance on China as he struggles to contain the coronavirus, said on Tuesday he signed legislation and an executive order to hold China accountable for the "oppressive" national security law it imposed on Hong Kong.

He said he also signed an executive order aimed at furthering punishing China for what he called its "oppressive actions" against Hong Kong.

It will end the preferential trade treatment Hong Kong has received for years - "no special privileges, no special economic treatment and no export of sensitive technologies," Trump told a news conference.

"Hong Kong will now be treated the same as mainland China," he said.

Trump and Secretary of State Mike Pompeo, who had lunch together at the White House on Tuesday, have blamed China for the spread of the coronavirus pandemic - which China denies - and have criticized Beijing for its Hong Kong crackdown.

The former British colony was returned to Chinese rule in 1997 with a law protecting freedoms of speech, assembly and the press until 2047.

The legislation Trump signed calls for sanctions on Chinese officials and others who help violate Hong Kong’s autonomy, and financial institutions that do business with those found to have participated in any crackdown on the city.

Trump faces a tough battle for re-election on Nov. 3 and his handling of the pandemic has drawn lukewarm support from Americans. Trump has blamed China for not doing enough to stop the spread of the virus.

"Make no mistake. We hold China fully responsible for concealing the virus and unleashing it upon the world. They could have stopped it, they should have stopped it. It would have been very easy to do at the source, when it happened," he said.

In his opening statement in the Rose Garden, Trump took aim at his Democratic rival in the election, former Vice President Joe Biden. Both candidates are constrained from active campaigning by the virus.

Pompeo was sharply critical on Monday of China's military buildup in the South China Sea, saying Beijing had offered no coherent legal basis for its ambitions there and that it had been bullying its neighbors.

“The world will not allow Beijing to treat the South China Sea as its maritime empire,” Pompeo said.