Trump denies pressuring Ukraine, will not commit to transcript release

By Patricia Zengerle and Steve Holland WASHINGTON/NEW YORK (Reuters) - President Donald Trump on Monday denied trying to coerce Ukraine into investigating his Democratic political rival Joe Biden, but wavered about whether he would release a transcript of a phone call that some Democrats say are grounds for his impeachment. 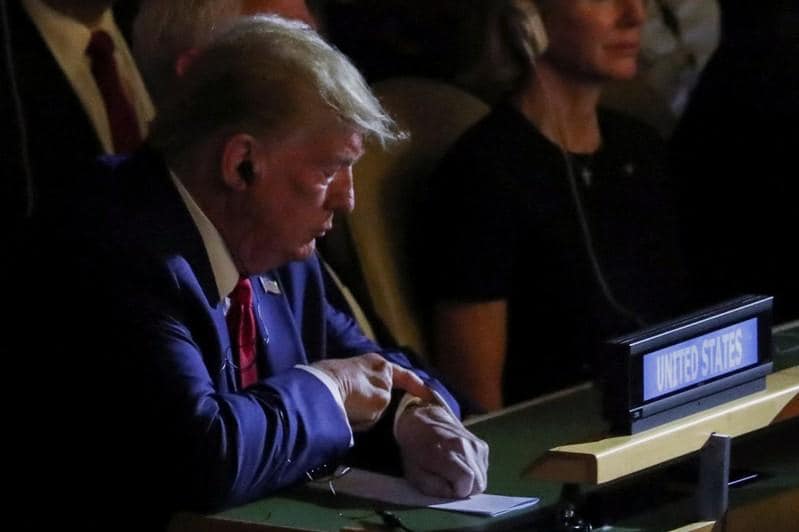 By Patricia Zengerle and Steve Holland

WASHINGTON/NEW YORK (Reuters) - President Donald Trump on Monday denied trying to coerce Ukraine into investigating his Democratic political rival Joe Biden, but wavered about whether he would release a transcript of a phone call that some Democrats say are grounds for his impeachment.

Trump told reporters in New York that he did not pressure Ukrainian President Volodymyr Zelenskiy in a July phone call to launch a corruption investigation into Biden and his son in return for U.S. military aid.

A U.S. whistleblower lodged a complaint about the contents of Trump's conversation with Zelenskiy, leading to calls from some Democrats that Trump be impeached for trying to enlist a foreign power to smear a domestic opponent.

Former Vice President Biden, whose son Hunter worked for a company drilling for gas in Ukraine, is now running for president and might face Trump in 2020.

Trump gave a contradictory message about whether he would

release a transcript of the call with the Ukrainian leader.

Earlier on Monday, Trump shrugged off the impeachment talk, saying he was not taking it seriously.

Congressional Democrats on Monday demanded documents from the White House about the Trump team's contacts with Ukraine.

The Democratic-led committees said in a letter that they "jointly request documents related to reported efforts by President Trump and his associates to improperly pressure the Ukrainian government to assist the president’s bid for reelection."

Trump on Monday hit out at Biden, calling him and his son "corrupt."

Neither the president nor aides have provided any details of possible corruption by Biden when he was vice president.

Ukrainian officials, while acknowledging that they had met with Giuliani, have not said that they would open any investigation of Biden or his son.

Ukraine's former general prosecutor, Yuriy Lutsenko, told Reuters on Friday that there was no evidence of wrongdoing on the part of Biden's son in his relationship with the energy firm.

The Wall Street Journal and the New York Times on Friday said Trump repeatedly asked the Ukrainian leader in the phone call to investigate the involvement of Biden's son with the company. He also asked Zelenskiy to work with his Giuliani, who had been urging Ukrainian officials to investigate the Bidens.

On Sunday, Trump acknowledged that he discussed Biden and his son in the July 25 call.

Senate Majority Leader Mitch McConnell said the Senate Intelligence Committee was working to get the intelligence community's inspector general to speak to the panel to discuss the whistleblower's allegations.

A Senate aide said a briefing with the panel's chairman and vice chairman was expected to occur this week.

The media reports about the phone call said Trump repeatedly asked Zelenskiy to investigate whether Biden misused his position as vice president under former President Barack Obama to threaten to withhold U.S. aid unless a prosecutor who was looking into the gas company in which Biden's son was involved was fired.

that Ukraine wants to stay out of the domestic political battle in Washington and that any attempt by either side to take advantage of Ukraine would damage relations.