By Sharon Bernstein and Steve Holland (Reuters) - Republican President Donald Trump opened a forum on criminal justice reform in South Carolina on Friday touting his support for sweeping reforms that he hopes will help him pick up more votes among African-Americans next year. Former Vice President Joe Biden, U.S. Senators Elizabeth Warren and Bernie Sanders, and six other Democratic contenders will also present their criminal justice plans at the forum, which is being held at the historically black Benedict College in Columbia. 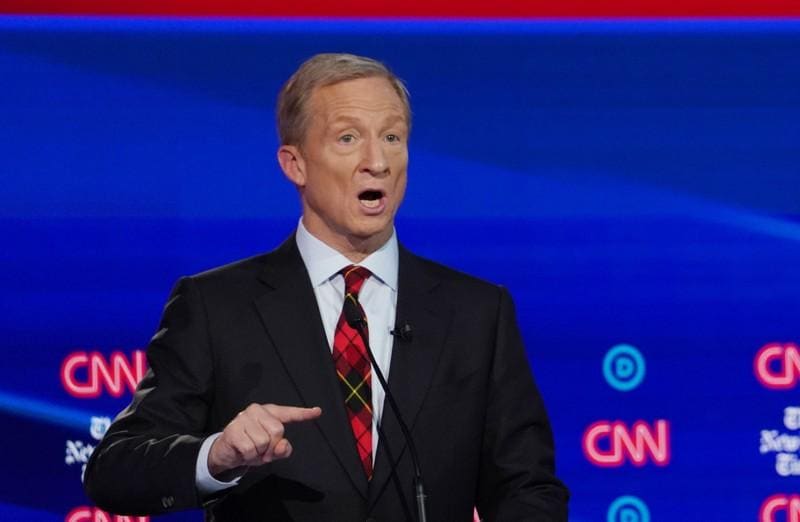 By Sharon Bernstein and Steve Holland

(Reuters) - Republican President Donald Trump opened a forum on criminal justice reform in South Carolina on Friday touting his support for sweeping reforms that he hopes will help him pick up more votes among African-Americans next year.

Former Vice President Joe Biden, U.S. Senators Elizabeth Warren and Bernie Sanders, and six other Democratic contenders will also present their criminal justice plans at the forum, which is being held at the historically black Benedict College in Columbia.

The weekend forum is aimed at tackling the next steps in criminal justice reforms after Trump last year signed bipartisan legislation that instituted a number of changes, including easing harsh minimum sentences for nonviolent drug offenders.

"I hope you will judge my administration based on the tremendous amount we have achieved," Trump said in his keynote speech. Trump won just 8 percent of the black vote in 2016 and there are few indications that he has turned the tide since.

U.S. Senator Kamala Harris of California cancelled her appearance at the forum and planned to speak elsewhere after Trump received an award at the event on Friday despite what she described as "decades of celebrating mass incarceration, pushing the death penalty for innocent Black Americans, rolling back police accountability measures and racist behaviour that puts people's lives at risk."

Here is a look at the criminal justice platforms for the leading Democrats in the 18-candidate field, as well as Trump's record during his first term in office.

The Republican president signed into law the First Step Act, which reduced mandatory minimum sentences, required officials to try to place inmates in prisons near family, expanded drug treatment programs for prisoners and parolees, and allowed some federal prisoners to finish their sentences early with good behaviour.

Using an argument that he also made when he ran for president in 2016, Trump said on Friday that generations of Democratic policies had failed minority communities.

"We've had so many people with empty political rhetoric. We're doing the opposite. We're acting, not talking," he said.

According to McClatchy DC, only 10 students from the school were given tickets to Trump's speech, with more than half of the 300 seats reserved for guests of his administration.

Biden, who served as vice president under former U.S. President Barack Obama, has proposed eliminating prison sentences for drug use, decriminalizing marijuana and eliminating sentencing disparities for offences involving crack cocaine and powder cocaine. He also would eliminate the death penalty. He would end mandatory sentencing that takes discretion away from judges, eliminate private prisons and end the federal system of cash bail, under which defendants who cannot afford to pay must await trial in jail.

Biden also has pledged to reform the juvenile justice system, including keeping youths from being incarcerated with adults. He would end incarceration for children who drink or engage in other behaviours that would be legal if they were older, such as truancy or curfew violations. He would work to eliminate barriers for felons re-entering society from prison, including restrictions on allowing them to receive food stamps, educational Pell grants and housing support.

Warren, a U.S. senator from Massachusetts, says the criminal justice system is harshly punitive, locks up too many people and is stacked against the poor and disadvantaged, as well as against African-Americans and Latinos.

She has called for increasing social services that help young people stay out of prison, decriminalizing truancy and relying on counsellors and teachers rather than police officers in schools. Warren has vowed to push to repeal the 1994 crime bill, which imposed harsh sentences on major and minor crimes alike and removed much of the discretion judges have in deciding who should be incarcerated and for how long.

She would legalize marijuana at the federal level and erase past convictions for the drug. Like several other Democrats, she would eliminate the differences in sentencing for powder versus crack cocaine. Warren would eliminate the cash bail system, under which defendants who are affluent enough to afford bail do not have to remain in jail pending their trials.

Sanders, a U.S. senator from Vermont, would push to enact numerous progressive reforms, including banning for-profit prisons, abolishing the death penalty and tightening rules and penalties for police misconduct.

He would end the system of requiring cash bail for defendants to avoid jail before they are convicted, a system he believes leads to locking up the poor at greater rates than the wealthy. Sanders' "justice and safety" plan would also end 1990s-era "three strikes and you're out" laws, which mandated life sentences for people convicted of more than two felonies, even if the third crime is a relatively minor offence. Many states have since reformed the laws.

Sanders says he will change the way police officers are deployed and trained, bringing in social workers or conflict negotiators to defuse potentially dangerous situations and mandating criminal charges against officers who engage in misconduct that results in a violation of someone's civil rights.

Buttigieg, mayor of South Bend, Indiana, would end prison sentences for drug possession and expand diversion programs aimed at keeping people with mental health and drug problems out of the criminal justice system.

Buttigieg has pledged to eliminate racial inequities in jails and prisons, and improve rehabilitation services. He would eliminate mandatory minimum sentences, which take discretion from judges in imposing prison terms, and establish a clemency commission to commute sentences of people the commission believes have been incarcerated for too long.

Along with his Democratic rivals, Buttigieg would eliminate private prisons and end the system of cash bail. He also opposes imprisoning people or suspending their drivers licenses for failing to pay fines and court costs.

Harris, a U.S. senator from California, would restrict the legal use of deadly force by police, end the incarceration of juveniles in adult prisons and legalize marijuana at the federal level.

Her proposals are part of a criminal justice platform that Harris says must hold wrongdoers accountable without veering towards what she calls an unjust system of mass incarceration and arrest that has harmed communities of colour and the poor. Harris, a former district attorney and state attorney general, has pledged to end the use of private prisons and seek to improve efforts to rehabilitate violent offenders.

Harris favours restricting the use of deadly force by police officers by allowing them to shoot subjects only when "necessary," rather than allowing it when "reasonable," the current standard in many states.

Yang, a businessman, would end the use of for-profit prisons. He would review sentencing laws to bring prison terms in line with what data shows are effective. He also would realign drug policy so that treatment is emphasized rather than punishment.

Yang has vowed to investigate racial disparities in the criminal justice system and to better fund programs aimed at reducing recidivism and aiding re-entry to society for people who have completed their terms.

The former congressman from Texas believes the country's current criminal justice system is "built on structural racism," leading people of colour to be disproportionately incarcerated. The roots of mass incarceration can be found in an economy that leaves black families poorer, less likely to have good medical coverage and more broadly disadvantaged than whites, O'Rourke says.

Like most of his Democratic rivals, O'Rourke says as president he would decriminalize marijuana, end the system of cash bail and ban the use of private and for-profit prison systems. He would increase funding for public defenders, the lawyers who provide legal services for people who cannot afford to defend themselves when accused of crimes. O'Rourke has also promised to improve rehabilitation and re-entry programs for people who have been incarcerated.

Klobuchar, a U.S. senator from Minnesota, has built her criminal justice proposals around a call for a stronger system of granting clemency for people who have been convicted of crimes. Pointing to inmates who were sentenced to life terms for first-time drug offences and others who were unfairly incarcerated, she says she would create a clemency advisory board and a position of adviser in the White House on criminal justice issues.

Klobuchar, a former prosecutor, would also further reform the system of requiring mandatory minimum sentences for many crimes. Mandatory minimum sentences were encoded in law as part of "tough-on crime" efforts in the 1980s and 1990s. They are believed to have resulted in a ballooning of the U.S. prison population and had a disproportionate effect on defendants of colour. Klobuchar also has called for reforming the cash bail system.

Booker, a U.S. senator from New Jersey, would extend clemency to inmates convicted of non-violent drug offences, continuing an effort to shorten such sentences that he began as a lawmaker. Booker also would decriminalize marijuana at the federal level and expunge the records of people convicted of cannabis-related crimes.

He would end mandatory minimum sentences for nonviolent drug offences. He would eliminate sentencing disparities between crack and powder cocaine, noting that harsher sentences for crack cocaine disproportionately affect defendants of colour.

Like many of his rivals for the Democratic presidential nomination, Booker has decried the War on Drugs, saying it has led the United States to incarcerate more of its people than any other nation and has particularly harmed minority and disadvantaged communities. Booker, who is African-American, would ban employers from asking whether job-seekers had ever been arrested as an initial question on an employment application.

Gabbard, a congresswoman from Hawaii, vows to reform the U.S. criminal justice system by seeking alternatives to incarceration, legalizing marijuana and banning private prisons, positions that are similar to those held by the leading Democratic candidates.

She has criticized current laws, noting that the United States locks up people for smoking marijuana but did not bring criminal charges against Purdue Pharma, which makes the opioid drug OxyContin at the centre of the deadly U.S. opioid epidemic.

Steyer, a billionaire former hedge fund manager and political activist, reflects the views of most progressive Democrats on criminal justice. He decries the prison system as racist and promises to work to eliminate private prisons, end cash bail and reduce the prison population.

He supports better training to reduce police brutality and more funding for public defenders. Steyer also has vowed to improve rehabilitation and workforce readiness programs for those in prison so they can better integrate into society once they are released. He supports the legalization of marijuana.

Castro, a former mayor of San Antonio, Texas, and secretary of Housing and Urban Development under former President Barack Obama, would legalize marijuana and expunge the records of those previously convicted of using the drug. He would end the death penalty and make it no longer a crime to enter the United States by crossing its border without permission.

In his "People First Policing Plan," Castro says he would "end over-aggressive policing and combat racially discriminatory policing," in part by banning the use of deadly force unless there is an imminent threat to human life.

Castro would end the use of private prisons. He would raise the age to be considered a juvenile offender from 18 to 21 and develop community programs aimed at preventing young people from entering the criminal justice system in the first place. He would eliminate the use of mandatory minimum sentencing, returning discretion to judges.