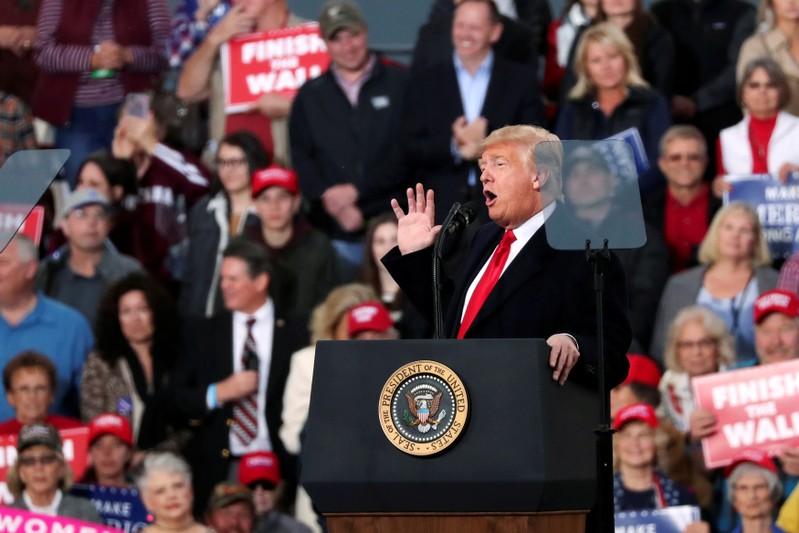 Trump's praise for Greg Gianforte, a Republican member of the U.S. House of Representatives who pleaded guilty to a misdemeanor assault charge for the incident involving the reporter, coincides with an international outcry over the disappearance of Saudi journalist Jamal Khashoggi.

"Any guy that can do a body-slam, he's my guy," Trump told a political rally in Missoula, Montana on Thursday night, referring to Gianforte.

"There's nothing to be embarrassed about," Trump added, with the crowd cheering.

Trump has been holding frequent rallies in the build-up to the Nov. 6 U.S. congressional elections in which Trump's fellow Republicans are seeking to retain control of the House and Senate.

Gianforte body-slammed Ben Jacobs, a correspondent for Britain's Guardian newspaper, in May 2017, the day before a special election to fill Montana's only House seat. Gianforte, who is running for re-election, was ordered to perform community service as part of his sentence after pleading guilty.

"We are different than dictatorships and totalitarian governments because we have a free press," Leahy told CNN, calling Trump's comments "terrible" and "irresponsible."

"In dictatorships, they don't have freedom of speech. They do attack reporters. They do body-slam reporters. We should not be encouraging that in the United States. We should be the beacon of freedom," Leahy added.

Flake, a frequent critic of Trump, wrote on Twitter: "Body slamming journalists is nothing to be proud of."

Trump has frequently criticized journalists, calling the news media the "enemy of the American people" and deriding some news organizations as "fake news."

"All Americans should recoil from the president's praise for a violent assault on a reporter doing his Constitutionally protected job," Knox said in a statement.

But some dismissed the criticism. The president's son, Eric Trump, said on Fox News Channel: "Oh, stop it. He wasn't the guy who body slammed anybody. He can have fun."

(Reporting by Makini Brice; Additional reporting by Susan Heavey; Editing by Will Dunham)